Today 10 December marks the seventieth anniversary of the Universal Declaration of Human Rights. To coincide with this milestone, Bankwatch together with more than 200 organisations globally has called on international financiers [1] to ensure that these institutions support the realisation of human rights, avoid causing or contributing to rights abuses, promote an enabling environment for public participation, and safeguard rights defenders. 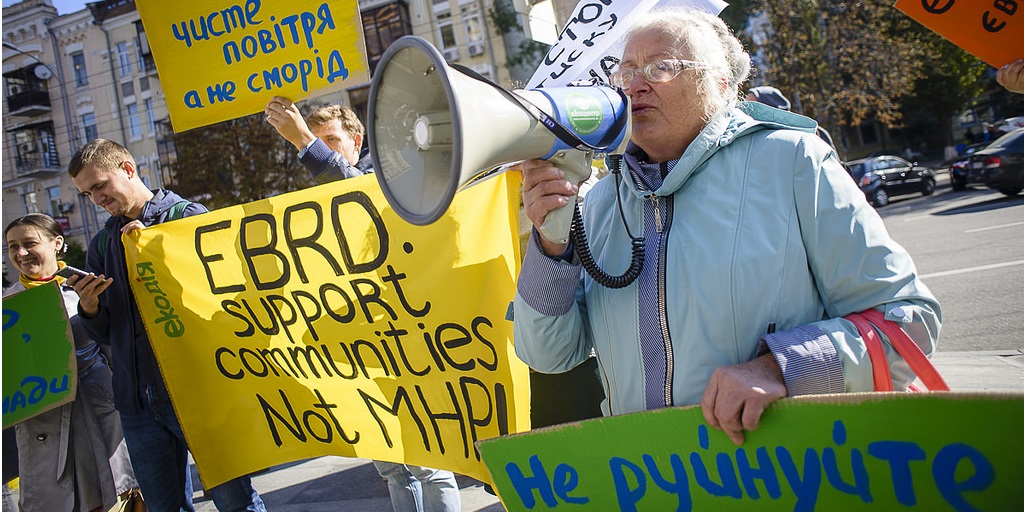 Since the adoption of the Declaration on Human Rights Defenders (HRD) twenty years ago, an estimated 3 500 human rights defenders have been killed because of their peaceful work defending the rights of others. In 2017 alone, at least 312 human rights defenders were murdered, 67 percent of whom were working in defense of land and territory in the context of large investments, extractive industries and big business.

States and big businesses are often behind rights violations. Large infrastructure and development projects are pursued in the name of state interest and in disregard of the human rights of locals. The same governments who have signed the Universal Declaration of Human Rights are shareholders in international institutions that were created to promote development, yet are far from being supporters of human rights.

In recent decades, some human rights considerations have made their way into the safeguard policies of these institutions in the form of social and labour rights guarantees. But such measures are not sufficient for development banks, as they operate in countries where human rights are systematically violated and locals do not have freedom to speak up for their rights. Both the European Bank for Reconstruction and Development and the European Investment Bank have improved their policies designed to protect the rights of potentially-impacted peoples, but there is still more to be done.

Project affected people need to be involved in an informed and meaningful process of planning and decision-making at the earliest stages of project development. Once investments have caused harm, the banks’ accountability and redress mechanisms must provide effective redress in a way that does not put complainants at additional risk.

Years of monitoring international finance have given us insights into these problems and at the same time, demonstrated the courage of human rights defenders who stand up to protect the rights of entire communities. These brave people often face threats, humiliation and even violence in spite of not receiving necessary protections from the state. This is the case in eastern Europe and especially so in Central Asia.

The EBRD and EIB operate in countries where human rights violations are systemic. In such an environment it is impossible for the banks to fulfil their policies on public engagement and human rights protection.

The EBRD has a detailed methodology for assessing a country’ commitment to democracy, pluralism and respect for human rights and is encouraging political and economic reforms through a “more for more”, and conversely “less for less” approach to investment. In cases like Uzbekistan where the country’s international partners have expressed cautious optimism about on-going reforms, the EBRD should go the extra mile and conduct proper human rights due diligence on all its investments. In countries like Turkmenistan, where there is no sign of progress, the EBRD should be clear to the government of what ‘less for less’ means and scale down all forms of investments towards halting operations entirely.

Even in the relatively open democracies of this region, the violation of human rights as part of  infrastructure developments is still a reality, and the ability of staff at the public banks to respond is limited, given the tools at their disposal. In Ukraine, Bankwatch follows a number of cases where local activists are under pressure for opposing industrial agribusiness. While an independent audit organised by the EBRD pointed out the need to improve communication with impacted communities, the bank is limited in the leverage it can exert over its client. In Georgia, the native Svan population has continually opposed plans of the government to build dams that would  force their displacement, and as a result have been the subject of intimidation and harassment.

A positive development at the institutions, as seen recently at the International Finance Corporation, has been the formulation of ‘no tolerance to retaliation’. The IFC  has recently released a statement expressing intolerance of any action by an IFC client, which amounts to retaliation- including threats, intimidation, harassment, or violence. This is an important step, not only to minimize risk in project implementation, but also to ensure that stakeholders are able to engage freely and safely with the IFC and its clients to ensure positive project outcomes. To avoid and mitigate potential risk of retaliation, the EBRD and EIB must develop internal guidance on integrating assessment of such risk into its project assessment procedures. This would involve analysis of the political and economic operating context, and awareness raising among Bank and client management.

The upcoming revisions of the safeguard policies at the EBRD and the EIB offer an opportunity to mainstream during the appraisal of a project an assessment of how human rights are being respected by the client.

A lack of protection for human rights defenders undermines the effectiveness of a bank’s grievance mechanisms, as it is too risky to submit complaints. The revision of the EBRD’s accountability  policy therefore should in addition ensure that its Project Complaints Mechanism is independent and safe for human rights defenders and communities who request redress for harm done by bank investments.

While we welcome steps taken by some states to support and protect rights defenders, it is concerning that governments may actually be undermining these efforts through the actions of their national development banks, bilateral development cooperation, and other development financial institutions  in which they participate.