A coalition of leading European NGOs* is looking to produce a campaigning documentary film. The available funding is EUR 25 000.

The coalition, which campaigns on the subject of energy security, poverty reduction and attainment of the Millennium Development Goals, wants to realise one project that will be used to aid our advocacy and inform the general public about the other faces of the debate over ‘energy security’.

What is ‘energy security’?

In recent years the phrase ‘energy security’ has gained currency among pundits and politicos alike in Brussels and across European capitals. Energy security, as it’s typically used within these circles, is taken to mean ensuring that the supply of raw materials necessary to fuel the European economy and way of life flows unhindered so that the current status quo can be maintained. But the debate is revealing not so much for what is being said in political strategies, government policies and the mainstream media but what is being left out. 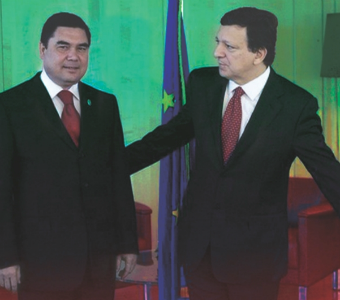 EU president Emanuel Barroso with Turkmenistan’s president Gurbanguly Berdymukhamedov. (It is being argued that without gas from Turkmenistan, one of the most authoritarian regimes worldwide, the Nabucco gas pipeline will not have enough gas supplies to make economic sense.

Europe’s drive to guarantee an even access of natural resources – epitomised by mega projects like the mines that extract raw materials or the oil pipelines and huge dams that pump energy from the global South to the North – creates a number of problems for those left in the wake. Increased militarisation, environmental destruction and human rights abuses in areas where resources are sought beg the questions ‘for what and for whom are we trying to secure energy?’

The coalition is looking to support one project that will bring the other sides of the energy security debate to the fore and give a human face to this complex issue that affect us all.

For more information and to submit treatments contact films AT bankwatch.org.

Participation in this call is open on equal terms to all natural and legal persons from:

Deadline for applications is October 31 2011.

* The campaign is being implemented by the following organisations: