Established to promote the transition to market-oriented economies in countries committed to multiparty democracy, the EBRD’s lending often destroys nature and harms communities by failing to conduct proper human rights due diligence and informed public participation.

Alternative news on the EBRD

Harsh economic realities and the discernible trend of democratic retrenchment in EBRD recipient countries suggest there are serious deficiencies in the bank’s overall ‘market-oriented’ approach.

Created after the fall of the Berlin Wall to promote the transition to a free-market economy, the European Bank for Reconstruction and Development (EBRD) is a leading institutional investor in Central and Eastern Europe, Central Asia and the Mediterranean regions. The bank is unique among multilateral development banks with its political mandate that commits its countries of operation to multiparty democracy, the rule of law and respect for human rights. The bank also has a strong mandate to promote sustainable development within ecological limits in the full range of its activities.

Despite its unique statute, the EBRD invests more than half of its portfolio in countries rated as authoritarian and hybrid regimes by the Economist Intelligence Unit. The bank’s newest Strategic and Capital Framework till 2025 foresees that only half of its portfolio will be green. Although the bank actively promotes a green economy and decarbonisation as key qualities of transition, it still invests in fossil fuels and carbon lock-in.

Our critique of the EBRD

Although the EBRD aims to align its investments with the Paris Agreement and to invest more than half of its portfolio in Green Economy Transition projects, the bank still invests in fossil fuels. Natural gas is no longer seen as a transition fuel, according to the International Energy Agency, so the EBRD urgently needs to review its energy and to develop a new climate strategy. EBRD’s investments should enable the just transition in our countries and a shift away from fossil fuels dependence and stranded carbon assets to carbon neutral development.

The EBRD has a well-developed and yet ineffective system for assessing political risks and safeguarding human rights. Unfortunately, there are many loopholes in this system that allow for projects to inflict harm on local communities and individuals, as our monitoring on the ground shows. The EBRD needs to plug the loopholes to ensure a watertight operational approach that delivers effective protection and promotion of human rights.

The EBRD has responded promptly to the pandemic and the war in Ukraine with solidarity and resilience packages, as well as policy advice and analysis of best practice in areas such as occupational health and safety, digital governance, migration and support for refugees. The bank needs to ensure robust due diligence for its crisis response investments and compliance with transparency, sustainability and integrity standards.

VOICES OF CIVIL SOCIETY:
The reconstruction of Ukraine, alternatives to fossil fuels and community struggles are hogh on our agenda.

The EBRD was given a core mandate to promote a transition to market economy in former centrally planned economies, which was expected to go hand-in-hand with the democratisation of these countries.

Three decades down the road, the state of democracy, the rule of law and respect for human rights are deteriorating significantly in many EBRD recipient countries, whilst the Bank has done little to revisit its engagement. 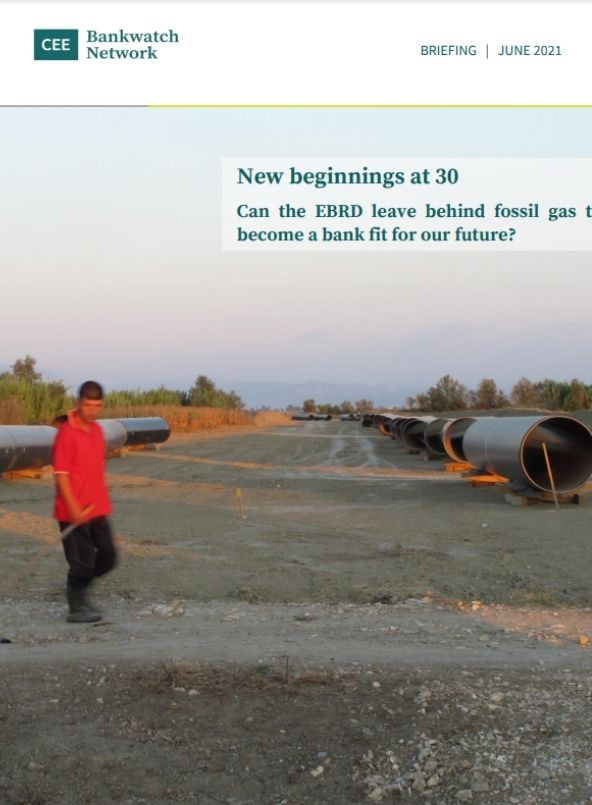 New beginnings at 30: can the EBRD leave behind fossil gas to become a bank fit for our future?

From power plants in Uzbekistan, to extensive new storage and transmission infrastructure in Cyprus, to Romania’s stranded pipeline, to upgrading and constructing new heating systems, we show that the EBRD’s plans for fossil gas are set to lead to fossil fuel lock-in and stifle climate action. 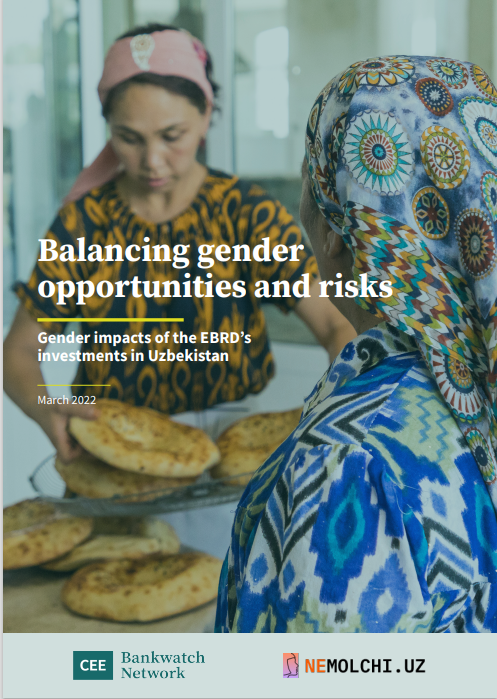 This report analyses the gender impact of the EBRD’s portfolio in Uzbekistan. It is based on an analysis of the documentation for nine projects and one programme which claim to promote gender equality, mainly with a focus on women’s economic empowerment. 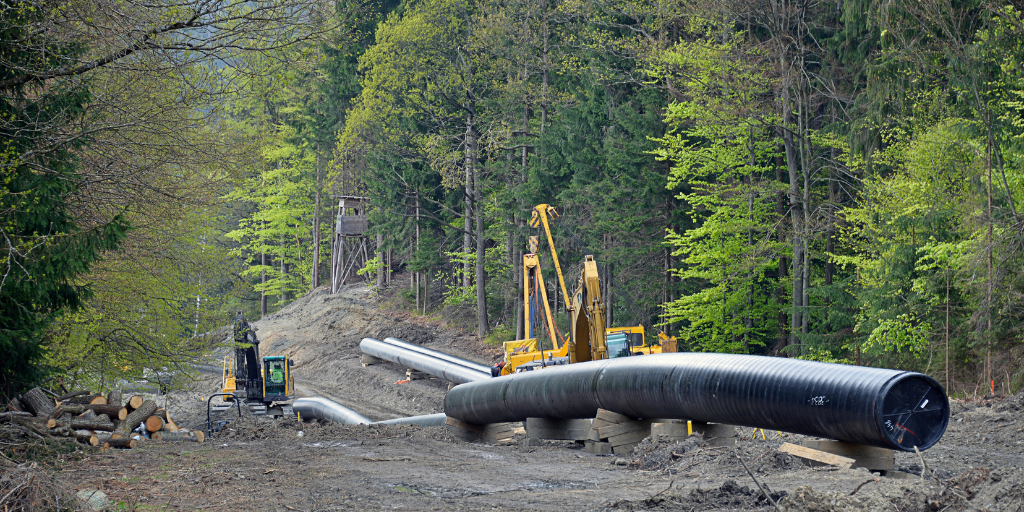 In October 2022, the EBRD published no fewer than eight environmental and social assessments on the Greece – North Macedonia fossil gas pipeline for public consultation. Thousands of pages analyse every nook and cranny along the planned route, but fail to notice the elephant in the room: the project’s massive greenhouse gas emissions. 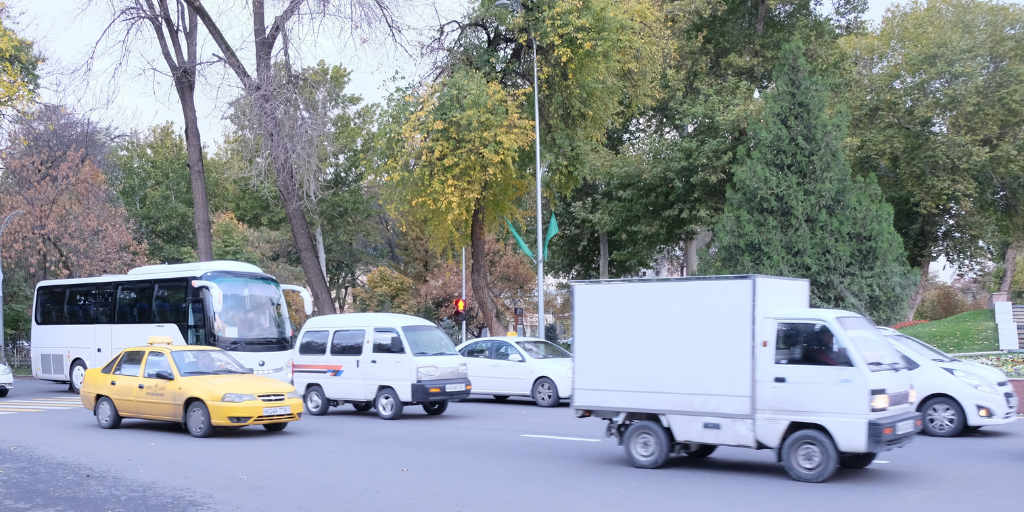 Is Samarkand ready to become a Green City?

This briefing reviews Samarkand’s existing urban development plans, the main environmental and social concerns of residents with a focus on public transport, and provides recommendations on including civil society in the GCAP planning. 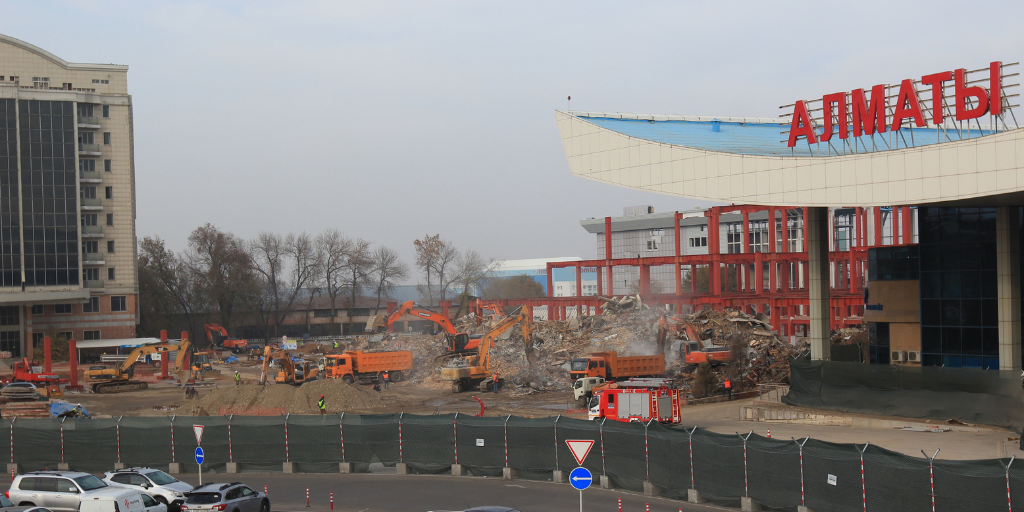 The Kazakh city of Almaty joined the European Bank for Reconstruction and Development (EBRD)’s Green Cities initiative in 2019. How does the first Green City Action Plan in Central Asia reflect public participation?