Home > Armenian youth out to save the country for future generations

The snow-covered Amulsar mountain towers over the few Soviet buildings scattered across the gorge in Jermuk, a spa town in the south of Armenia. It was this mountain, and the race to dig out the vast deposits of gold under its surface, that inspired Vazgen Galstyan to become active. 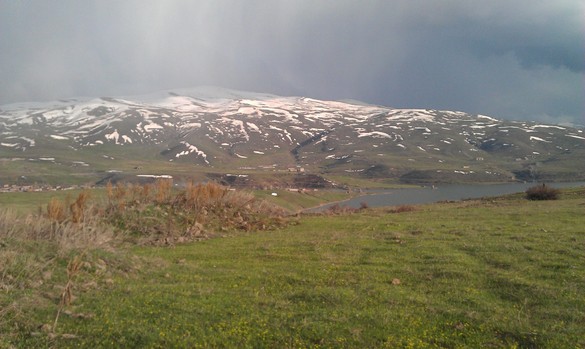 “I got involved two years ago when I heard that the people of Jermuk were not being consulted over Amulsar Gold”, he recalls, referring to the open-pit gold mine project (pdf) at the mountain.

Geoteam, a subsidiary of Lidyan International Ltd., has a 25-year licence to mine for gold in the mountain, which is estimated to hold 2.5 million ounces of gold. The potential negative impacts of cyanide gold mining on the health of people and on the precious local lakes and mineral springs have caused concern among locals.

When Jermuk was not included on the list of communities required to give their blessing before authorities approved this massive project, Vazgen and a few others organised and took action. Their concerns about Amulsar soon expanded to cover other projects mushrooming near their community.

Armenia’s future under threat by oligarchs

Now 24, Vazgen is co-chair of the Jermuk Development Centre, which raises awareness among local communities about the impacts of infrastructure projects like the Amulsar gold mine.

One common concern of activists in Armenia is the influence exercised by oligarchs in driving forward pet projects, irrespective of the costs to people’s health or the environment.

Vazgen and Jermuk citizens points to the decision of local authorities to cede a piece of Jermuk’s main park to one company owned by the Armenian president’s brother in order to build a luxury health spa, despite the town already hosting many spas in need of renovation. 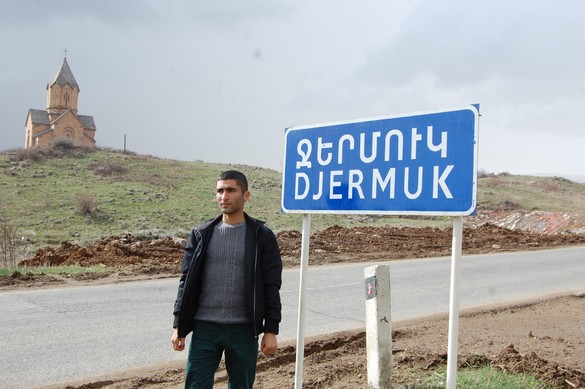 Another high profile example of this type of cronyism is the slow destruction of the fertile valley at the foot of the Ararat Mountain, which plays a key role in securing the basics for an Armenian diet rich in fruits and vegetables. 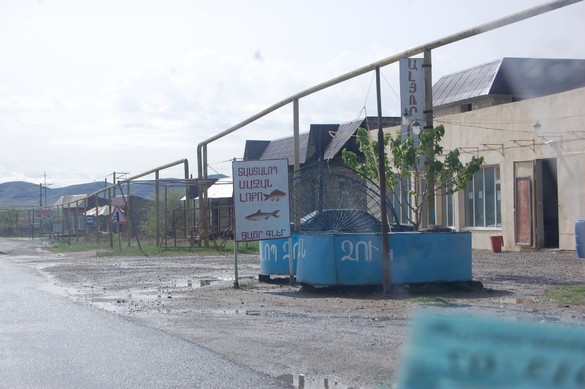 Villages in the Ararat valley that used to sell strawberries on the roadside are now selling fish from the over one hundred fish farms in the region. 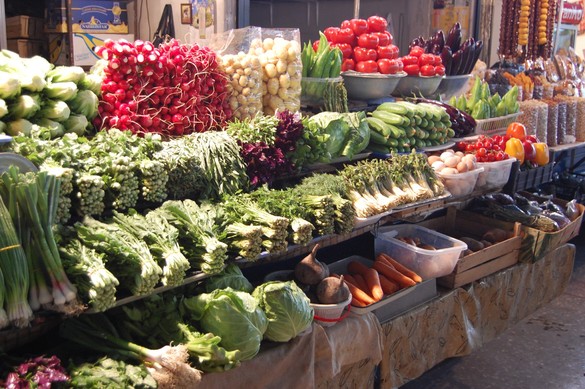 The Armenian diet is rich in herbs and vegetables – water in this semi-arid country is of key importance for the survival of the people.

Recently the government allowed for and even encouraged local investors to use the underground water reserves in the valley to flood vast regions for trout and sturgeon farms, resulting both in the loss of fertile land and the depletion of the water reserves at an unprecedented rate.

Communities in the area are having to dig deeper and deeper to find drinking water.

Perhaps the most affected by this senseless rush for riches are the sources of water in Armenia. 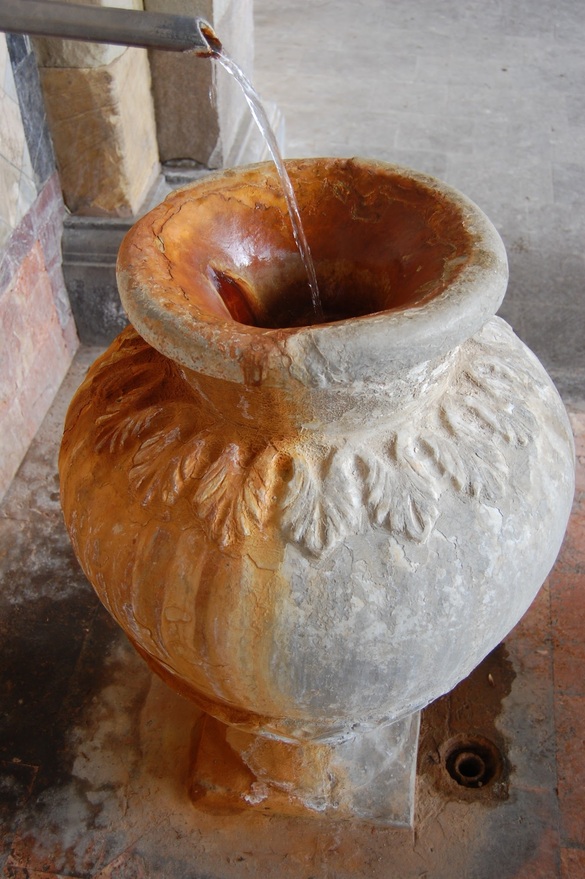 Jermuk’s city park has a number of taps where visitors can come and drink the natural spring water which is considered to have healing properties.

In Jermuk, the unique hot springs are at the backbone of the local economy and they are under threat from the proposed gold mine. In order to protect the springs, Vazgen and the Jermuk Development Centre have even rallied the support of businessmen who are interested in safeguarding the touristic potential of the area.

In addition to the threat to Jermuk’s hot springs, the Spandarian reservoir, the country’s second largest, is at risk because of the cyanide leaching and toxic tailings created by the mine.

“The water from here flows directly into the Kechut reservoir and from there to lake Sevan”, says Vazgen, in reference to the largest fresh lake in the Caucasus region.

Amulsar lies on a seismic fault-line that connects it with the springs; open-pit mining for gold in these conditions (estimated at 350 meters deep) puts the community’s livelihood at risk. The problem is compounded by the dynamite explosions necessary to reach the gold deposits. The Balneology Institute of Republic of Armenia as well as a couple of reputable hydro-geologists (such us Ruben Yadoyan) have expressed their serious reservations about the project.

Vazgen and the communities’ concerns for Armenia go beyond Amulsar. In a semi arid country like Armenia, protecting the environment is about protecting water.

In and around Jermuk, it is not only mining but also hydro projects which put pressure on water reserves. The first hydro plant in the area was completed in the 1950s, and just a few kilometres away is the Kechut reservoir where two new plants are being developed on springs feeding into the reservoir, with one under construction and a second under assessment. 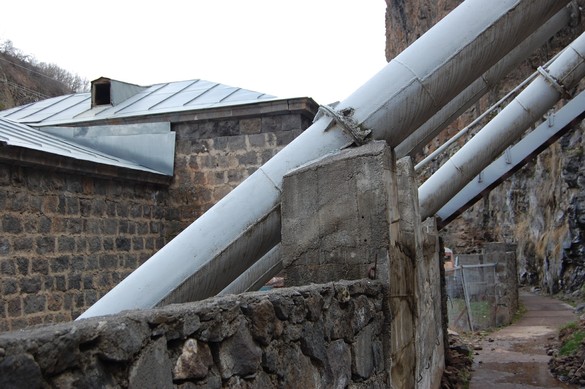 The small hydro project built in the 1950s in Jermuk, in which water was diverted from a waterfall into these large pipes, is an ominous sign of things to come in Jermuk and throughout Armenia.

For the first new hydro plant, construction started even before permits were issued. When these were issued, the permits were based on dubious assumptions and improbable information about the impacts of the project, which involves diverting parts of the river through plastic tubes.

“The permit claims that over a distance of 2.5 kilometres, only 10,100 square metres of space will be needed for the tubes to pass through. But that would mean a 4-metre wide band over 2.5 kilometres: not even enough for construction vehicles to pass through! And they’re claiming that only 250-500 trees will need to be cut.” 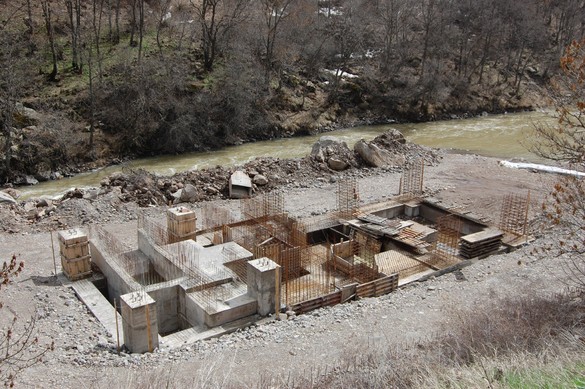 The foundations for this new hydropower plant were laid out three months before the permits for it were issued and Vazgen and his group have found additional irregularities around the documentation.

The Armenian government has heralded in a boom in small hydropower projects, with approximately 300 built or under development in the last few years.

Although the country has numerous rivers, the semi-arid climate reduces many to a trickle in the summer, and the design of small hydro plants – to ensure the efficient use of water – diverts much if not all of it into pipes that flow directly into the electricity generating turbines. 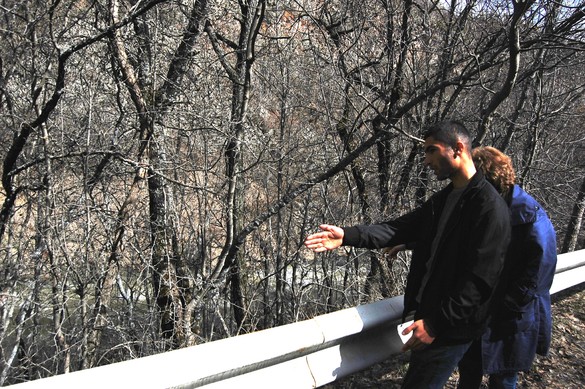 The forest and river around Jermuk are now also under threat. Hydropower plants are set to divert the river into pipes and destroy the forest immediately next to the river. Vazgen’s group is organising his community, speaking to the mayor, hotel owners, and holding awareness raising sessions in schools.

The boom in hydropower construction has incentivised programmes that require the national electricity network to pay a tariff over ten times that which it pays for traditional hydropower plants and as well to provide a guaranteed purchase for 15 years. These programmes essentially guarantee profits for any investor.

Less than an hour’s drive from Jermuk is the village of Shatin. Here the local population has been fighting to stop construction of a small hydropower plant on the 60-odd kilometre long Ekhegis river, where already over a dozen small hydropower plants are in place. As one villager explains, “the water comes out of one pipe only to go right into the next”. 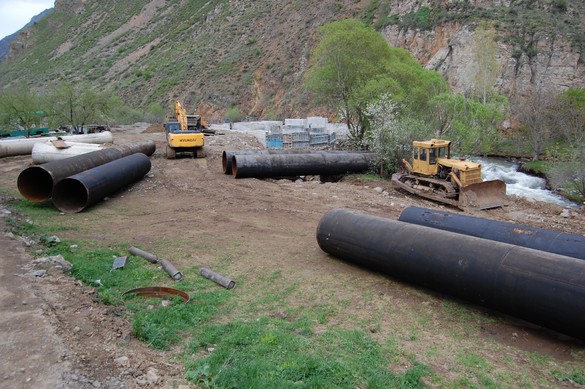 Construction works as well as diversion of the water into pipes for the small hydropower plants are threatening the fertile lands by the Ekhegis river that much of the community in Shatin depends on for its own livelihood.

In a village where unemployment is widespread and subsistence farming is dependent on irrigation from the Ekhegis, the indifference of the government and hydropower plant financiers to the impacts on the community is striking.

Investments from public financiers in small hydro plants are often justified as supporting a less polluting source of energy and as a contribution to fighting global warming by reducing greenhouse gas emissions. Lending from banks like Germany’s KfW, the World Bank and the European Bank for Reconstruction and Development (EBRD) is contributing to the diversion of the country’s rivers into pipes by financing the ever-expanding small hydro business.

The locals are not convinced by the arguments of the powers that be, yet the project continues and locals tell us that they have all but given up in their struggle.

“The other day the power plant’s owner said to me with a smirk on his face: ‘You see it doesn’t matter what you say, we’ll get it done anyway.’ The only choice we have now is to leave this community,” says a despaired Shatin resident.

At this point Vazgen intervenes. He launches a vehement appeal for them to carry on with their struggle, promising to mobilise activists in the capital Yerevan to come support them in their struggle. He does not know whether he will be able to help the villagers, but for sure he will keep trying. 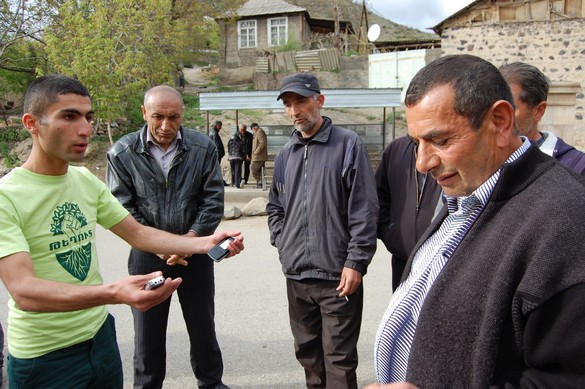 Shatin locals say they are close to giving up. The project is carrying on despite their protests, which were even recently met with violence from project supporters.

Vazgen has an uphill battle ahead of him and he knows it: but he also shows the kind of courage and determination that is needed most today to ensure Armenia’s natural beauty is preserved for generations to come. 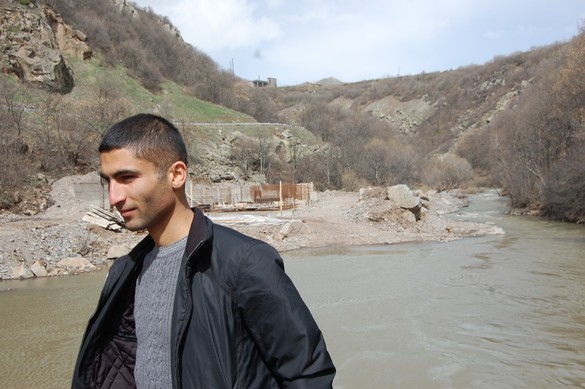