Adding to the ongoing febrile atmosphere in the country, Egypt’s military-backed authorities just yesterday passed a controversial new law that imposes draconian restrictions on public protest. Meanwhile, in recent weeks the European Bank for Reconstruction and Development has reconfirmed its intention to remain active in the country – despite a number of serious doubts still hanging over its potential impact. 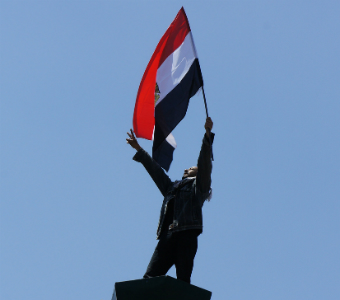 The US government may have decided in early October to suspend – at least temporarily, and following the ousting of President Mohammed Morsi in July and the subsequent crackdown on his supporters by the Egyptian military – much of the USD 1.3 billion in military aid it provides to Egypt, yet the European Bank for Reconstruction and Development (EBRD) swiftly confirmed that it is sticking to its course in the troubled north African state.

Speaking to the Wall Street Journal during October’s World Bank/IMF meetings, EBRD president Sir Suma Chakrabarti made clear that EBRD shareholders, including the US itself, had no plans to pull the bank out of Egypt in spite of the recent further instability there.

“It’s not business as usual as if nothing’s changed, because clearly our major shareholders are thinking about this issue, but at the same time nor is it ‘stop doing what you are doing,'” commented Chakrabarti, while talking up the country’s investment potential.

According to the Wall Street Journal,

“Mr Chakrabarti said both Eastern Europe and North Africa would attract greater investment if they made further reforms to liberalize their economies, including privatizing state-owned assets.”

Speaking to Bankwatch, however, Adam Hanieh from the Department of Development Studies at SOAS in London and author of the recently published ‘Lineages of Revolt: Issues of Contemporary Capitalism in the Middle East‘, takes issue with such prescriptions.

“Despite claims to the contrary,” Hanieh points out, “the EBRD’s explicit perspective on privatization and liberalization confirms that there has been no major shift from ‘the business as usual’ attitudes of the major international financial institutions. These policies have wrought enormous damage on the vast majority of the Egyptian population, and they will undoubtedly continue to do so. There can be no real way forward that satisfies the needs of the poor until the country breaks substantively with the neoliberal trajectories of past regimes.”

Even before the events of July, involving hundreds of deaths and more bloodshed across Egypt, a report from the European Court of Auditors identified the failure of one billion euros of EU aid to do much for post-2011 ‘Arab Spring’ Egypt, and certainly not the enduring, precarious human rights situation.

Moreover, as part of a recently convened United Nations consultation to gather critical analysis from civil society on the UN’s post-2015 development agenda (pdf), Arab civil society networks have made it plain that the post-2015 agenda “should constitute a major departure from the prevailing development model pursued in the region over the last three decades.”

According to submissions provided to the UN consultation, and sharply critical of the “policy package of [international financial institutions, such as the World Bank and the IMF] involving typically liberalization, deregulation and privatization, export- and foreign investment-led growth”, Arab civil society participants to the consultation maintained (pdf)that

“people in the Arab region were motivated to take to the streets not only by the undemocratic and corrupt nature of the regimes in place, but also by the sense of social exclusion and exploitation resulting from the development policy orientation that had been pursued under these regimes – often at the instigation of external partners, including international financial institutions.”

If you’re wondering exactly what the EBRD has to offer Egypt – and, indeed, more generally its other countries of operations – the publication also in October of Publish What You Fund’s 2013 Aid Transparency Index confirmed more worrying EBRD trends.

The EBRD has been ranked among the worst for its transparency performance. (Click image to see in full size.)

In its assessment of the transparency of multilateral institutions, Publish What You Fund was condemnatory of the EBRD:

“Multilaterals as a group do well in the Index, with 13 of the 17 placed in the very good, good or fair categories. The average overall score for multilaterals (53%) is significantly higher than the overall Index average (33%). […] The EBRD is the lowest ranking multilateral, scoring only 24.5%, reflecting the lack of comprehensiveness in the publication of organisation and activity-level data. The EBRD is the only multilateral agency that does not publish any information systematically in machine-readable formats.”

Significantly, bearing in mind the bank’s aspirations and new role in north Africa, when it comes to transparency – surely a hugely important concept in Egypt right now, given the prevailing circumstances – the EBRD is lagging far behind the African Development Bank’s 63.7 percent in Publish What You Fund’s ‘good’ category, raising doubts about the standards the EBRD is bringing to the north African region.

Love us – we have taxpayers’ money at our disposal

But the EBRD has money. Quite a lot of it. Mostly our money. And thus is in demand, if a recent Tweet from Sir Suma is anything to go by.

Just finished in rainy Brussels. Barroso and Rehn in good form. Everyone wants #ebrd to do more to help Greece, Portugal and Cyprus.

Greece, Portugal and Cyprus, if the Tweet is not just a piece of vanity micro-blogging, may now be on the EBRD’s radar. It’s certainly an interesting prospect for a bank set up – specifically – to assist post-communist states adjust to and ‘get with’ market discipline, to now be considered as a panacea for countries that have been so ravaged by market disciplinarians.

With unemployment levels spiking in eastern Europe some 24 years after the fall of the Berlin Wall, it is surely highly inappropriate to call on the same doctor to administer the same tonics in north Africa and – maybe now – southern Europe that have kept so many eastern European economies in critical condition (pdf).