Over the past year a new player has aggressively joined the Estonian energy debate: Fermi Energy, a private company promising fourth generation small modular nuclear reactors (SMRs). The problem is that instead of solving the country’s energy and climate woes, the not-so-futuristic SMRs are creating new challenges. 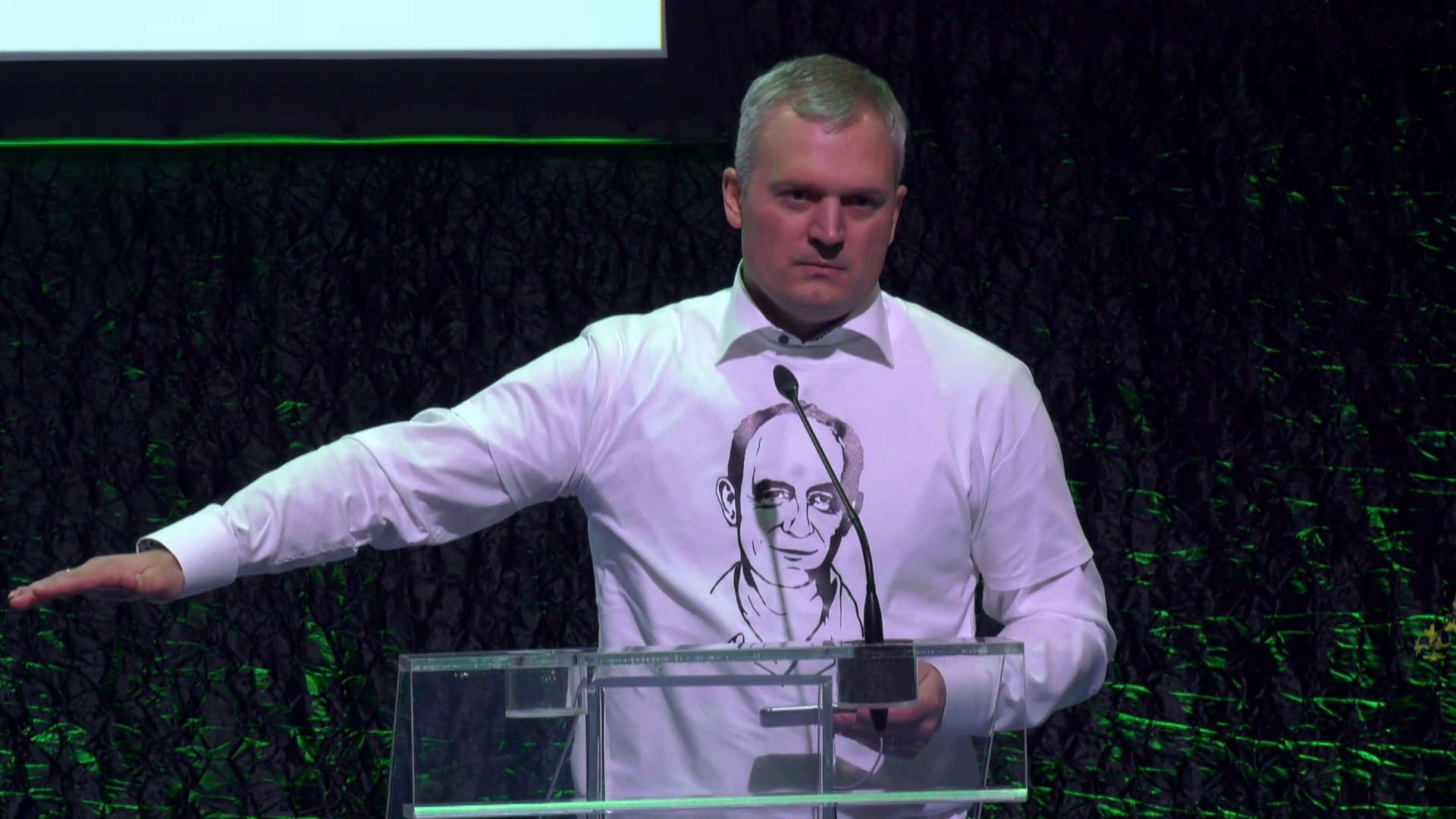 Kalev Kallemets, CEO of Fermi claiming that they will not build old reactor technology

Local environmental organisations are not against all forms of nuclear energy: if one day a solution emerges that is inherently safe and uses local nuclear waste as fuel for example, that technology might be worth consideration. But the current campaign by Fermi has none of those features, although the skillfully vague marketing has already recruited many high-profile patrons. What is Fermi energy really up to, and how can this one small company set a precedent to negatively impact the global transition to sustainable forms of energy?

Hardly a panacea for Estonia’s energy and climate needs

Fermi, in their pitch for SMRs that same day, ignored this reality. They furthermore dismissed renewables like wind and sun as insufficient for Estonia’s energy demand, and energy storage solutions and interconnections with other nations as inadequate– in spite of the fact that Estonia has one of the highest levels of interconnectivity in the EU.

So what technology is planned for Estonia? Prioritising cost and market readiness ahead of safety, Fermi is likely to install third generation reactors, albeit in a smaller case. Although they have not stated this publicly, it can be assumed from a recent modelling study commissioned by the company, which concluded that fourth generation designs are still too far into the future to be worth consideration. Fermi CEO Kalev Kallemets has also confirmed this intention numerous times at various smaller public events. The only options that could reach a usable stage in the next decade are preassurised water reactors (PWR) and boiling water reactors (BWR) – see figure below.

This is neither a safe nor cost-effective choice for Estonia: third generation nuclear reactor technology still has known safety risks, no long-term waste solution and an estimated electricity price of 40-90 $/MWh. 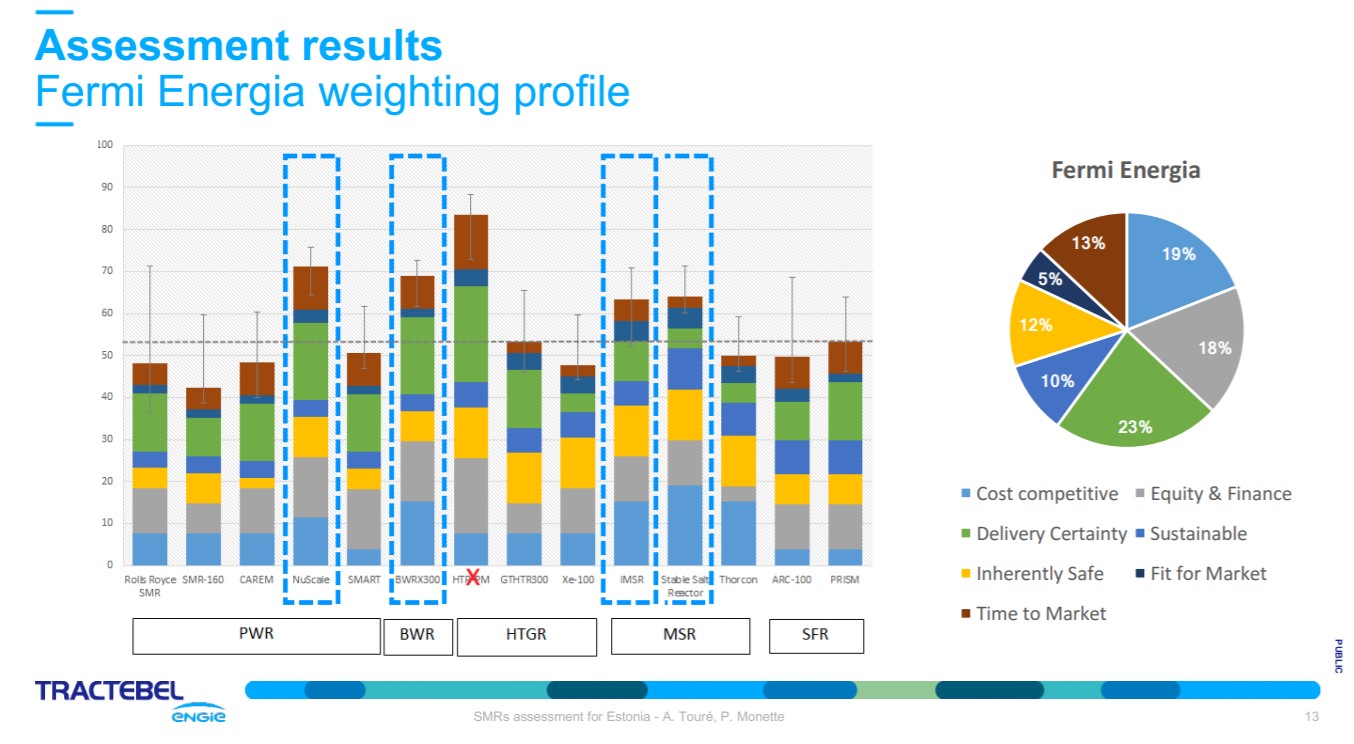 Comparative assessment of SMR technologies by Tractebel. Notice that MSR stands for molten salt reactors that are still possibly decades away from deployment

Is such a plan financially feasible? Fermi claims, based on a study they commissioned and run on estimates they have provided, that the plant’s financial return could be around 150 million euros annually. They have even proposed the possibility of exporting excess energy to neighbouring countries.

Yet the run on figures assume high energy prices, and the analysis is based on fourth generation SMRs, which Fermi has ruled out as a viable option. On the contrary, a recent independent analysis by the German institute for Economic Research on current reactor designs has shown that on average, a nuclear power plant will incur a loss of about five billion euros, with “positive” scenarios totalling a loss of 1.5 billion. Crucially the authors note: “New” technology concepts do not change the outlook.

It seems obvious then that the local market in Estonia is too tiny for such a costly endeavour, so a bigger scheme must be at play: it appears Fermi’s interest in the country is rather in using it to pave the way to easier and faster licensing of perhaps hundreds of small reactors across the globe. Fermi CEO Kalev Kallemets appeared to confirm the company’s interest in this dangerous approach in his closing remarks of the conference day, and other speakers at the event provided similar arguments.

For instance, Bret Kugelmass of the US-based Energy Impact Center argued that only nuclear energy can provide enough power to suck vast amounts of carbon from the air, the whole nuclear industry should be thoroughly de-regulated to cut costs, nuclear power plants could be built in densely populated city centers to prove their inherent safety, waste should be dumped in the oceans and nuclear fuel reserves will last for 26 billion years. 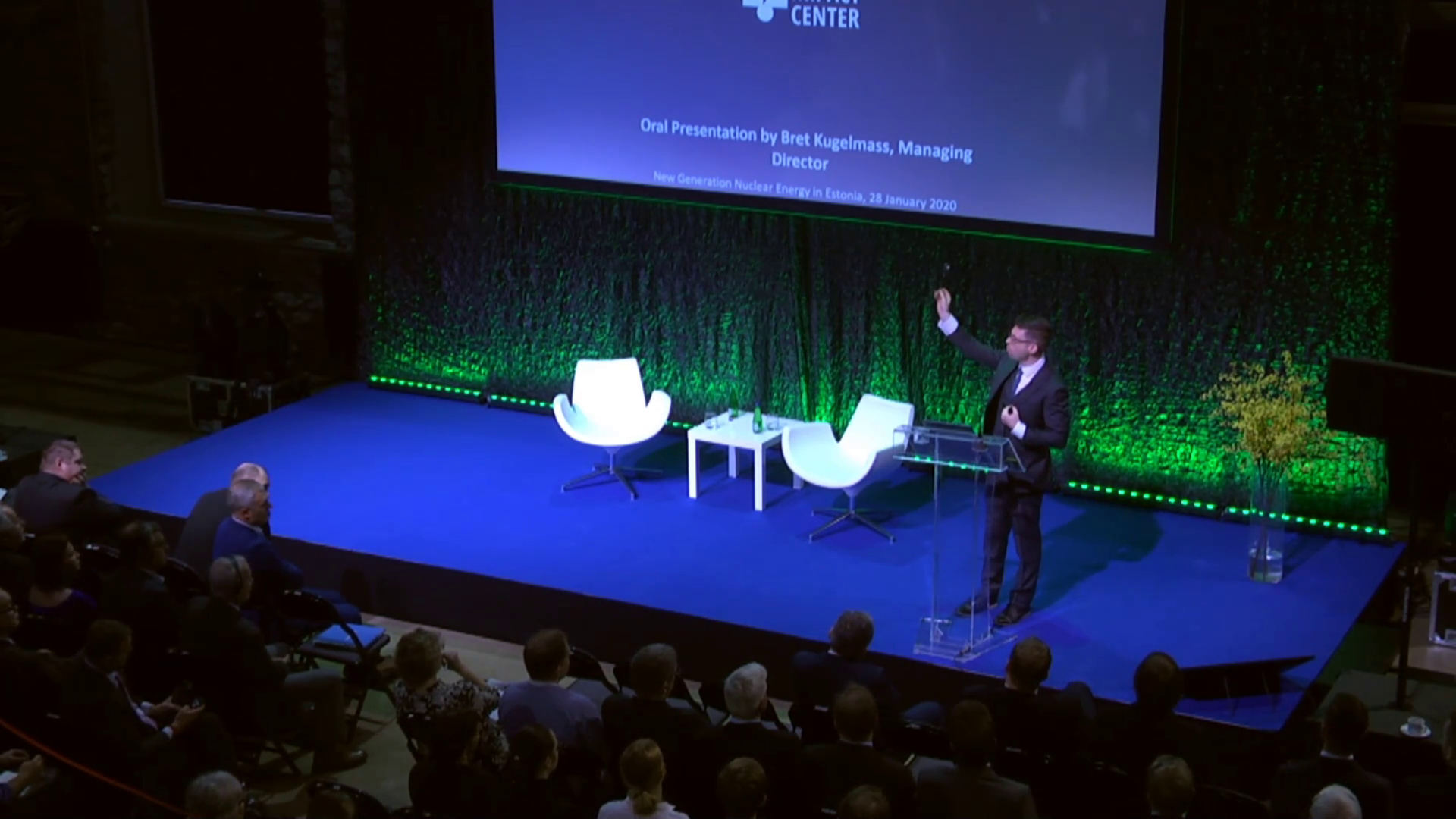 Estonia, with no prior experiences in regulating nuclear power, appears at risk of being conned into an era of countless, small third generation nuclear power plants. All the company needs to begin is to reach phase zero, which means getting nuclear energy included as a viable alternative in some national energy strategy. The recent National Energy and Climate Plan (NECP), which mentions nuclear as a possible option for meeting future energy needs, shows that this is almost the reality.

Can the market steer Estonia to the best solution? Even though Fermi employees insisted that SMRs do not compete with solar and wind, this is hardly so. If this were true, why did the company dedicate a whole presentation to bashing alternatives? Once on the market, nuclear power – with its long-term fixed contracts and subsidies – will clearly steal a market share from renewables. Wind parks, for example, are already required to compete at market prices, which was also correctly noted in the keynote by Sandor Liive from Fermi.

Furthermore,  although the plant would be privately owned, public regulation would be required. Given the limited public financial resources that Estonia has, every euro spent on establishing a costly nuclear regulation body is an investment that could go towards renewables.

Even an unbuilt SMR creates waste

Fermi seems bent on establishing a wholesale third generation SMR business. The strategy to sway public opinion seems to be to sending mixed messages about the technological choices and viable renewable alternatives, while quietly lobbying the state to start preparing for the inevitable nuclear renaissance.

In order to push this message, they target renewables like wind and solar as “weak”, “too easy”, “unreliable” and “unacceptable”. With the climate crisis looming and the necessity of a just transition in the coming decade, spending resources on old and non-renewable technologies must be seen as a nuclear waste of time.