Local opposition in Italy to the Trans Adriatic Pipeline (TAP) is mounting. During a business event organised last week, a dozen mayors staged a protest against the government’s support for the project, who together with civil society and local authorities fear that the pipeline will destroy the environment and the safety of their communities. Instead they are demanding that EU drop the project. 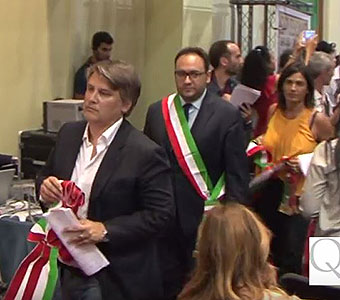 This guesst post was prepared in cooperation Counter Balance and Re:Common.

Though the summer sun wanes in the south of Italy, the debate over the future of the Trans Adriatic Pipeline (TAP) remains hot. During the Fiera del Levante, an annual business event in Bari, local mayors left the venue when the Undersecretary of State De Vincenti said that TAP is “a project that will cause no damage to the environment, and an opportunity to develop tourism and agriculture”. This is just the latest instance of discontent over the project.

TAP will run from Greece to Italy via Albania and is part of the Southern Gas Corridor, a series of three pipelines designed to bring gas from Azerbaijan to Italy for the European market. The project is among the top priorities of the EU’s energy security strategy but faces fierce opposition.

The project was given a green light by the Italian government in April 2015 in spite of opposition in the region, the province and numerous municipalities, including the municipality of Melendugno where the pipeline will enter Italian soil.

As the pipeline will cross dunes, pinewood, olive groves and state roads, local administrators and residents fear that it will impact the region’s essential tourism and agricultural sectors. Tensions were already high after local citizens and authorities were ignored by the Italian government during the environmental impact assessment process for the project in 2013 and 2014.

Following the authorisation of the project in 2014, the situation continued to deteriorate when the EIA was challenged in front of an administrative tribunal, with three proceedings now underway. In parallel, judicial authorities are investigating on alleged violations of national laws, adding complexity to the broader picture.

In May 2015, the mayor of Melendugno Marco Potì sent an open letter to the European institutions backing the project, including the European Commission, the European Bank for Reconstruction and Development (EBRD) and the European Investment Bank (EIB). The letter reflected the positions of local civil society organisations and 40 other mayors from the region who have voted for several motions opposing the project. So far the letter has not received a response.

A first loan of USD one billion was approved by the EBRD for Russian oil major Lukoil, one of the companies in charge for the development of the Shah Deniz II field in Azerbaijan that will supply the Southern Gas Corridor.

Civil society across Europe protested the loan, given the increased repression of media and human rights groups in the country, and urged the EBRD not to finance the project. The European Investment Bank is now in the running for the project, having announced in August 2015 that it would consider financing the Italian, Greek and Albanian sections of the TAP. The loan would be one of the largest in the history of the institution at EUR 2 billion.

The mayors who stood up against the project, as well as local citizens and NGOs, expect that the European Commission and the EIB listen to their concerns and ensure that the project adheres to the EU’s principles on human rights and the environment. Given the situation both in Italy and Azerbaijan, this will be a challenging task for these EU institutions to justify.