Home > Blog entry > In Estonia, taming the IT tiger

In parallel to the UN Climate Summit, Bankwatch sends our experts on Just Transition to Estonia to share with locals the experience from coal mining countries that have started to develop action plans for regions that would need to go through re-development due to coal phase-out.

Estonia is not a coal-mining country, but it is a country with oil shale, which is equally as polluting. It is a key factor why Estonia has the second-highest per capita CO2 emissions in the EU.

When we started planning this visit, the risks of the forced oil shale phase-out were ignored by  Estonian politicians, but they had to face reality. Due to high CO2 prices in the electricity sector in the summer of 2019, the state energy company Eesti Energia had to suspend uneconomic operation of their power plants that were unable to compete in the energy market. This was the moment when the government started to look for short term fixes — such as the very inefficient co-burning of biomass or the even more bizarre proposal to resurrect production of oil from oil shale, an  industry that was hit by temporary crises in 2016.

At the same time, there is still a positive side to all of this—for the first time in modern history, Estonia was able to operate its electricity sector without oil shale burning. When we met with the head of the Estonian Renewable Energy Association—Mihkel Annus—he said the Solar Energy Association had difficulty last year keeping track of all newly developed PV projects and indicated that there are a number of projects in the wind energy sector that are under preparation as well as  plans to build a pump storage plant in the mining area. It seems that the main problem remaining in Estonia is the Ministry of Defence, who is afraid that their obsolete radar system would not be able to deal with wind turbines in some parts of Estonia. Thus, they block development of wind turbines in some areas.

The Estonian Renewable Energy Association (EREA), at the end of 2016, already published a scenario for a 100% transition to renewable energy, showing that it is both economically feasible and technically possible. The scenario would allow Estonia to use its economical and geographical properties to act as a role model to help others realize that a strong political vision  and clear decisions are needed from the government. 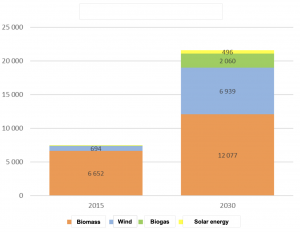 The transition to zero-carbon is possible, as it was recently stated by the President of Estonia, Kersti Kaljulaid: “[w]hen looking at our experiences I feel that if there is one country capable of taking the leap ahead, it is Estonia. Countries that invest in future technologies usually win, as the success of our digital state attests.”

Indeed, a week ago, a group of 33 Estonian IT companies signed a Green Pledge prioritizing the environment as an integral part of their business.