The 70MW energy project, envisaged as the first stage of a larger geothermal power plant is developed by the Akiira Geothermal Limited company and has been enjoying the backing of multiple European and American financiers.

Nevertheless, Bankwatch, the Narasha Community Development Group, independent researcher and scholar Dr Lotte Hughes as well as the International Accountability Project have been voicing concerns about the project and its environmental and social impacts.

Not least, it was the 47 families that make up the Lorropil community who would be directly affected by the Akiira project planned on the very same land they have been living on. And yet, the company has failed to engage the community in any meaningful way beyond ordering them to vacate the land.

In June, following a site visit and meetings with members of the local community, Bankwatch urged the EIB to look into the matter and ensure its client, Akiira Geothermal Limite, meets the bank’s requirements on stakeholder engagement.

On October 10th, the EIB informed Bankwatch it had decided to stop the appraisal of the project, “due to the fact that the EIB has seen no progress on the Akiira Geothermal Expansion project over the past 3 years”.

“The EIB has taken all the allegations extremely seriously and will make every effort to ensure that the EIB’s Environmental and Social Standards are respected throughout all of its projects,” the message from the bank stated. “The EIB informed the Akiira project sponsors that should any unlawful evictions have taken place, the project would have become ineligible for EIB financing.”

In a statement posted on Centrum’s website two weeks later, Akiira argued “no social nor environmental concerns have been brought to our attention as a result of our exploratory drilling activity.” The statement stands in contrast to the fact that concerns had been raised with the company by the International Accountability Project.

Despite the grave concerns over the adverse impacts on the Lorropil community, Akiira Geothermal remains intent to go ahead with the controversial project at any cost.

On October 30th, the Kenya News Agency reported that “the Nakuru County Commissioner Erastus Mbui Mwenda has ordered the arrest of bogus squatters who prey on land set aside for [the Akiira project].”

For Commissioner Mewnda, the village of Lorropil was simply part of “a trend where individuals erect temporary structures on land meant for mega projects and wait for compensation.”

It is unclear how long exactly the community has resided in this site, but in no way does it justify the violent and ongoing attack on them.

Moreover, the Commissioner’s order itself is in breach of Kenya’s Land Act which stipulates such order should be publicly announced in writing at least three months in advance. It was also in violation of the EIB’s social standards, which require resettlement assistance is provided in such cases, even for informal occupants of the land.

The families have already been threatened in June, when representatives of the company told residents they have just days to move away.

On the morning of November 3rd these threats materialized when the residents’ houses were set on fire, displacing the community in its entirety. 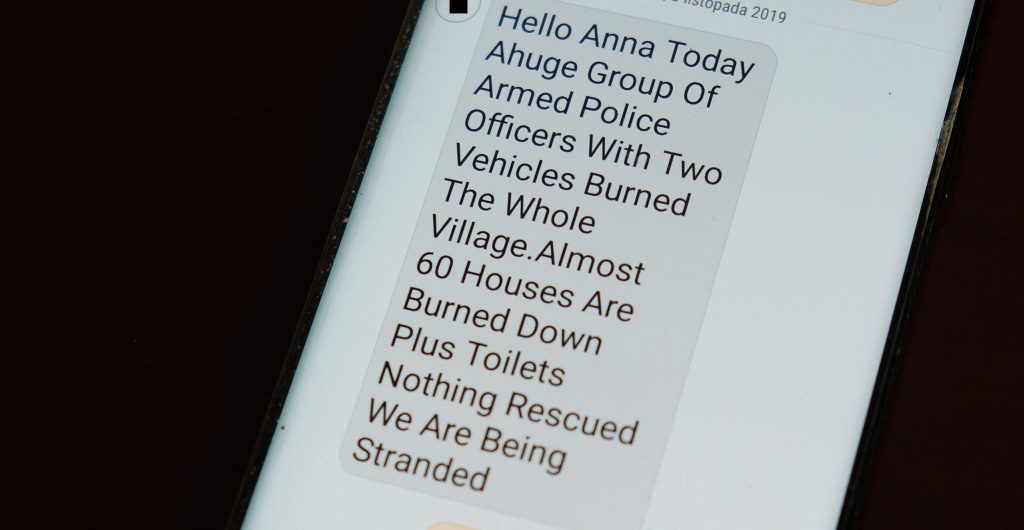 The day after the village was burnt to the ground, Bankwatch received reports that police arrived to the site to chase the residents away. The violent police action continued over the following days. The families were chased away, and their clothes and food were burnt.

The villagers, who claim to be descendants of the workers on the former colonial Kedong ranch at the same site, have already been living in abject conditions, in makeshift houses and without access to water.

Now, with nowhere to go, the community, and especially children, were left with no shelter and food. On request of local activists, Red Cross later came to provide emergency assistance.

The project is financially supported by the US government’s Power Africa programme as well as with European public money through the Global Energy Efficiency and Renewable Energy Fund of Funds (GEEREF), which is managed by the European Investment Bank (EIB). The EIB was also considering a EUR 155 million loan for the project.

The EIB has a long history financing geothermal energy in Kenya. The controversial Olkaria project, co-financed by the EIB, involved the uprooting of an indigenous Maasai community.

In its October 10 message to Bankwatch, the bank said it had decided to examine the situation in Lorropil “with a view to determine whether they should be considered project affected people under the Olkaria project currently being financed by the EIB.”

The situation on the ground has been fast deteriorating and Bankwatch has been reaching out to all of Akiira’s shareholders and financial backers to intervene immediately. They need to make clear that displacing communities is not acceptable, and help the villagers restore their livelihoods.