Shortly after 80 000 people took to Moscow’s streets at the end of December to oppose the 4 December controversial parliamentary elections that resulted in United Russia retaining control of parliament, Bankwatch ally and Khimki forest defender Yaroslav Nikitenko was forced to spend ten days in jail over a fabricated administrative crime. 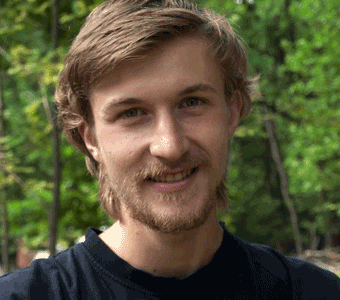 Yaroslav was wrongly imprisoned for expressing solidarity with a prominent member of the Russian opposition movement who has been the subject of harassment by authorities.

After his release on 4 January, Yaroslav described his experiences Bankwatch. We came to know Yaroslav through the campaign to defend Khimki forest where he just visited last weekend. Fortunately at the moment things are quiet in the Khimki forest, with no more deforestation happening mostly because of the winter freeze. Khimki activists remain alert though, alternating watch at the forest camp they set up specifically for this purpose.

While things are quiet in Khimki, Moscow and other major Russian cities have been very loud since protests began after the December elections. According to Yaroslav, “Many people in Russia became active after the elections for the Duma; during the elections, people – who had been preparing to observe carefully how the elections took place – observed many violations, got very angry with the results and this is why tens of thousands took to the streets, building the current very big protest movement for just elections.”

Another mass demonstration is scheduled for 4 February. Yaroslav explains that, even though the Russian opposition is not currently united in its support for a common presidential candidate, many are convinced that United Russia and President Putin must leave power. This political change could have a positive impact for the Khimki forest as well, since close allies of President Putin have a direct interest in the destruction of the forest.

In such a pivotal moment for his country, when opposition leaders were systematically being abused by the police, Yaroslav did not stay away, and on December 25, he attended a rally in solidarity with Sergey Udaltsov, one of the opposition leaders that has been repeatedly arrested in recent months. “We were not allowed to go inside the court where Udaltsov was tried even though we have an open court system in Russia,” Yaroslav recounts. “After he was sentenced, we started to go home but the police came and arrested three of us; the other two were released, but I was detained for longer. I think I was arrested merely because I was towards the edge of the crowd – hence easier to seize – because I was doing nothing at the time, simply standing there and updating my Twitter account.”

After the arrest police employed a number of provocations, whose sole purpose felt to be the psychological breakdown of opponents of the authorities. For instance the police brutaly seized Yaroslav and left scars on his arms. Yaroslav later spent the night in the police station and slept in a very cold room with barely any cover. The most problematic obstacle was that his lawyers were not informed about the details of his court date the next day, and Yaroslav was unable to inform them because his phone and other property was confiscated upon arrest.

Recalling his court date, Yaroslav said, “It was bizarre. Even though the judge started out by asking me whether I had understood my rights, such as the right to a lawyer and the right to appeal, in the end I was not able to exercise those rights properly. The judge heard from two prosecution witnesses who declared that I was shouting and disobeying order, but failed to accept any witnesses speaking on my side. In the end, I was given 10 days of administrative arrest, with the judge arguing that ‘there is no reason not to believe what the police officers say’.”

Similar circumstances shrouded the following day’s appeal: “The day of my appeal, the higher court was full of riot police dressed in black on all floors, there were five inside the court room. At the same time, my own witnesses were not allowed to come in under the justification that there was not enough space. In the end, the initial sentence was upheld, under the similar reasoning that ‘there is no reason not to believe what the police says’.” Yaroslav added that for someone without any prior conviction, a ten-day sentence for disturbing order is inappropriate and points out that the appeal judge had had his name on the Magnitsky List.

After the absurd and tense trial, Yaroslav’s jail time was a rather peaceful period. “I received so much support from the outside. I am a vegan so people were bringing me parcels with food, as well as books to read. On December 31, many people gathered in front of the jail to show their support for me, and my lawyers passed me Christmas cards signed by many people.”

“Physically it was not so hard,” explained Yaroslav. “Mentally it is difficult. After a few nights, I started having bad dreams. It’s a big psychological pressure to be detained, and not only detention, but seeing how judges pass these absurd sentences, not taking into account any argument of the defence.”

Spending the new year in a low security prison after convicted of a ‘traffic and other small offence’ verdict and occasionally communicating with other inmates was an occasion for Yaroslav to draw conclusions about contemporary Russian society. “All those people in jail were much better than the prison guards. And the prison guards were much better than the police detaining us.”

On the day of his release, Yaroslav was again harassed similarly as to the time of his trials. While anticipating that family, friends and supporters would be waiting for him upon release, Yarolsav was moved to another location just a few hours before being let go and set free from there. One final psychological blow, a portent of the absurd things that can happen for disturbing those in power.

Yet Yaroslav, like many Russian citizens and civil society groups, will continue their struggles. “Ours is not a justice system, but a system to punish and humiliate people. I will certainly continue to be an activist, to attend meetings, so of course it is possible that they harm me, temporarily, again. But we will continue.”