Artist and social activist Nada Krstajic tells the story of how growing up in heavily polluted Obrenovac inspired a public art installation to raise awareness about the dangerous air residents of Belgrade breathe due to the city’s proximity to coal-fired power plants.

Last month, a series of artistic interventions I set up to illustrate the problem of air pollution in Belgrade got people finally discussing how coal affects their health, even when they don’t live next door to the power plants.

I grew up in Obrenovac. Obrenovac is a town in Serbia about 30 kilometres away from the capital, Belgrade. It is home to two coal-fired power plants, Nikola Tesla A and B, which for years have polluted the town’s air and created serious health problems for our community.

We were always aware of the impact of air pollution, ash and soot were visible on the snow every winter, and they were present on our terrace almost every day.

Instead of warning us about yellow snow, our parents used to tell us ‘Don’t play with that black snow’.

Air pollution was also harmful for our health. My mother’s asthma, which had affected her since childhood, only got worse once she and my father moved to Obrenovac in their early 20s. My friends and I were enrolled in swimming lessons from a very early age to help us maintain our lung capacity. But this was not enough to prevent me from developing respiratory problems, as well.

Once, when I had a cough for an extended period, our doctor advised us to go to Sokobanja, a famous retreat for patients with respiratory problems which offers natural vapour inhalation therapies. When the doctor at Sokobanja learned that my mother and I came from Obrenovac, he prescribed us inhalations a few times a day more than for other patients. He also recommended that we visit Sokobanja for a week or two twice a year, which we did for many years.

No escape from pollution

Finally, when I was in high school, we moved to Belgrade. We chose the southern part of the city, because there are some forests there and the air is usually cleaner than in the other parts of the city. But we realized that although there were no big industries within the city limits, the air pollution from power plants and other industries in nearby towns, like Pančevo, and even Obrenovac, greatly impact Belgrade as well.

The residents of Obrenovac blamed the poor environmental conditions during the 1990s on widespread corruption. There were always rumours that the filters in the plants were never changed and that money for these operations ended up elsewhere. So in the transition period of the early 2000s, people were quite optimistic that things would change.

In the last two decades, however, environmental issues have become more widely discussed in the news, and sources of information about the pollution in our country have become widespread. We now realise that not much has been done since the 1990s – we still breathe extremely polluted air all the time.

Art as an advocacy tool

In 2012, I decided to teach an art workshop about the environment for children in Obrenovac. I visited kindergartens there and I spoke with them about the environment – how we pollute and protect it, and how they feel about it in their own community.  Many of their drawings showed power plants as big polluters, or sometimes flowers coming out of plants presenting their wish for the future.

I painted their drawings on large wooden boards, which we placed next to a new canal and running trail that led to a forest. It was a reminder that children are quite aware of pollution and that because of them, we are obligated to do something about it.

Two years later, in 2014, there was huge environmental catastrophe – floods damaged the entire city, and, of course, our artistic wooden billboards. Murals I painted in Obrenovac were also destroyed by the floods.

I was especially sad about the mural I painted on the wall of centre for people with developmental disabilities. While I was painting it, many people approached and asked what the building was for. It was sad that large number of residents didn’t know about this place, but my mural had made it more visible to society.

This encouraged me to think more about what I could do as an artist for other important issues in our society. I discovered that my obligation as an artist is to create socially engaged street art available to everyone. After several projects in Serbia, I also participated in a climate change street art project in Berlin, a street art festival in Bucharest to enhance the local community, and in southern Sicily where we painted murals to show solidarity with refugees.

In order to increase awareness about the current environmental situation, I wanted to create an artistic and educational art piece in Belgrade. When the COVID-19 pandemic hit, I started thinking about the air pollution that had affected my family and my community’s health. The air pollution in our region directly impacts our lung capacity, which is so important for surviving the virus. I couldn’t help but wonder, if we had better air, would this help us fight the pandemic?

At the same time, air pollution has threatened our health for years, and will continue to do so long after the risk of COVID-19 goes away. Even before the pandemic started, some people in Serbia wore masks outdoors on days with extremely high air pollution. Social media was full of advice on which mask to buy, and some people started buying air filtering machines for their homes.

#AirPollution on the Sava quay

When Bankwatch approached me to ask if I would be interested in creating an art installation to raise awareness about air pollution, the topic felt perfect for the Sava quay in New Belgrade. This quay is very long, and many people take walks there on weekends with their family and friends. I thought it would be a perfect place to illustrate the distance a person is from coal-fired power plants from the beginning to the end of the strolling route. I wanted my installation to be eye-catching, functional and reversible. 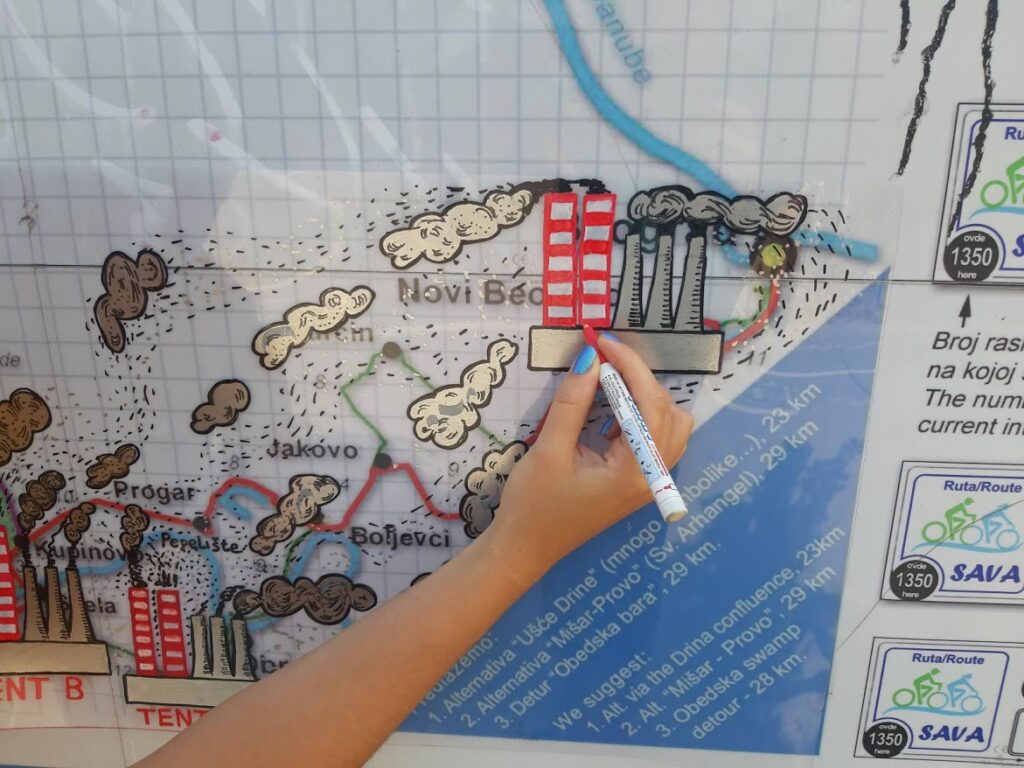 First, I tied coloured fabric over concrete benches right next to the Sava River. I chose four colours to indicate different levels of pollution at different distances from the major coal-fired plants near Belgrade, Nikola Tesla A and B and Kolubara A. 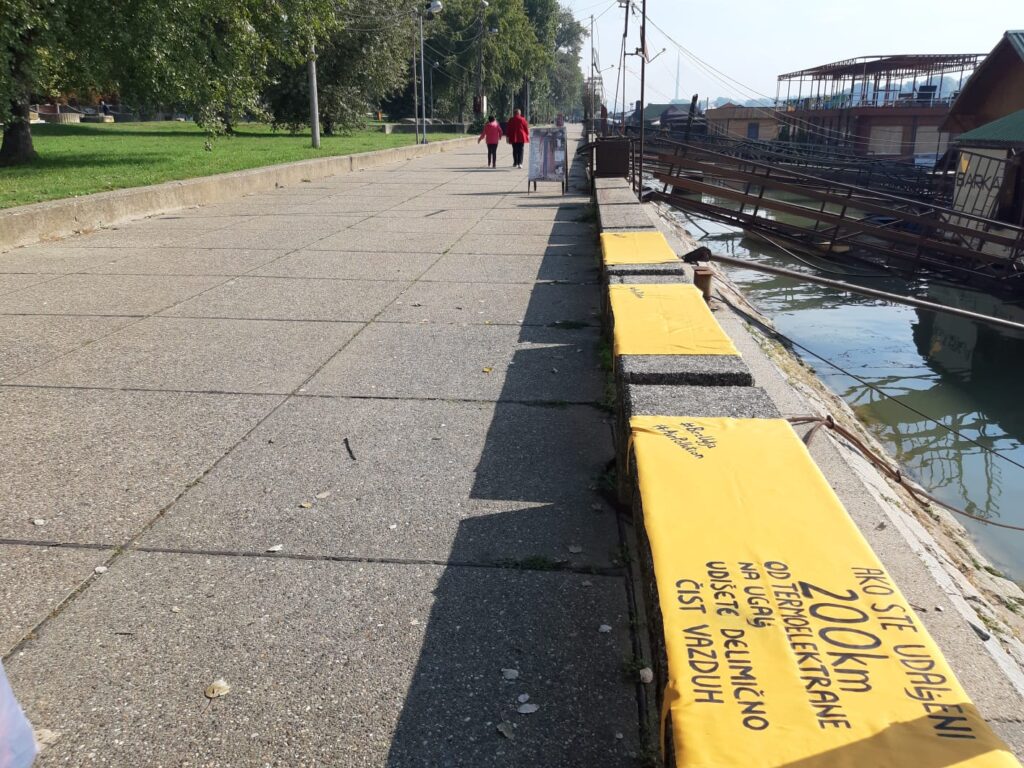 I wanted to make people reflect on the fact that there is no safe distance from these polluters, and that just because coal fired plants are not in their neighbourhood does not mean that they have good quality air. I saw a lot of passers-by stop to read what was written, and many of them nodded worryingly.

I also created a ‘smog globe’, which was a temporary installation on the same quay. Instead of snow, as you might expect to find in a snow globe, this one has ash and soot; instead of a fir tree or a snowman, I painted a power plant. This installation was made out of painted circular panels that people could stand between and take photos, creating the effect of being trapped inside a ‘smog globe’. 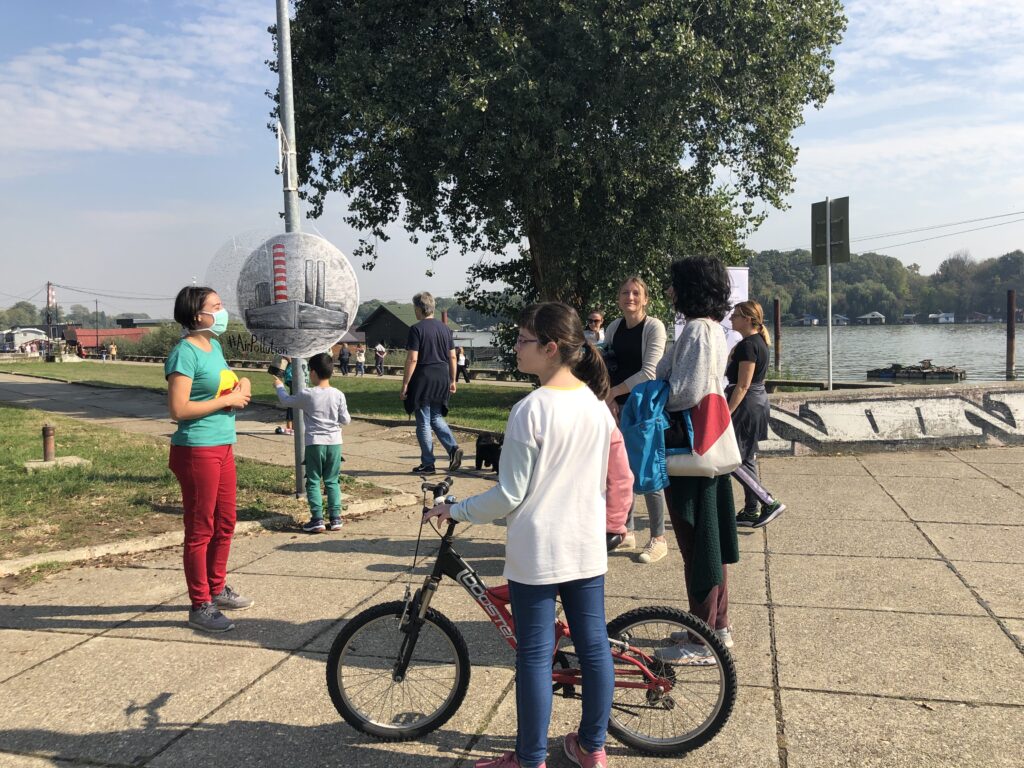 Passers-by were really interested in the globe and in the informational banner I made. Some people told me they were aware of the issue but felt powerless to change anything; others asked whether the coal-fired plants were really that close to the quay. Older people talked about how it is now my generation’s turn to improve the environment. Others wanted me to tell their kids, who were interested in my installation, more about the topic. I was glad that people were willing to talk with me and that they recognized the importance of the issue.

Even though I wanted people to be concerned about the health of their families, I wanted to make a fun installation that people would remember. Everyone who saw the exhibition will recall my smog globe when they see snow globes in the winter, which is when the air pollution will be at its highest due to the heating season.

As a child, my first association with snow was the black ash that fell in Obrenovac. The idyllic snow holiday moments had a different meaning for me, so I created this installation to share my experience and to show people how far from ideal our winters in future will be if Serbia does not stop using coal and lignite.

I also created a ‘smog globe’ Facebook frame so that the topic of air pollution can continue to develop on social media. You can add the frame to your profile picture and raise awareness about pollution here (EN, SR, MK)!

Nada Krstajić graduated from the Faculty of Applied Arts in Belgrade in the wall painting department. She received professional training in art conservation and aid for cultural heritage in times of emergency. She has taught many art workshops for children, and is also a mural painter and graphic designer.