Home > Blog entry > The dark side of EBRD’s Green Cities

Residents of Almaty’s Kairat district are being suffocated by an illegal depot for diesel buses. They call on the European Bank for Reconstruction and Development to find a solution before the Bank approves a new loan for green public transport in Kazakhstan’s largest city. 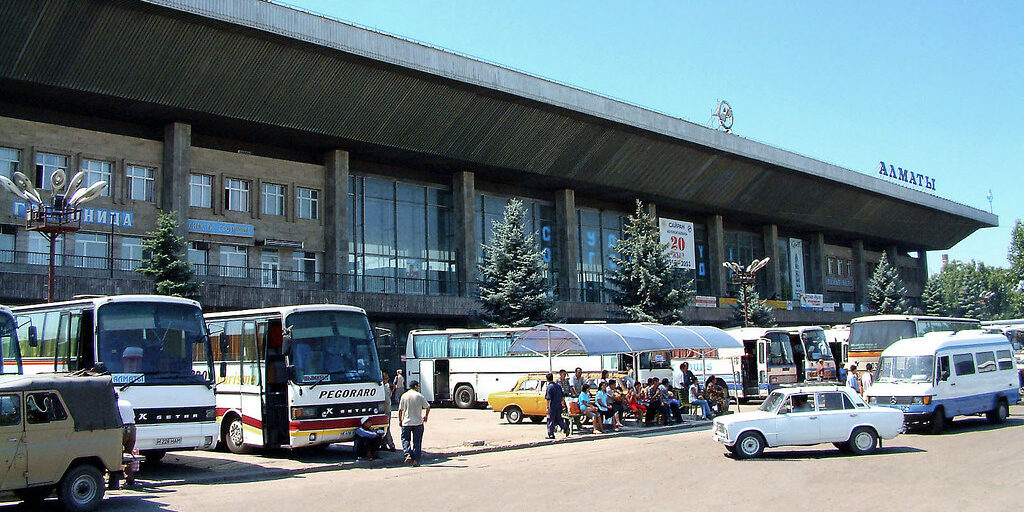 On 10 December, the European Bank for Reconstruction and Development (EBRD) announced through local media that its client Almatylectrotrans has committed to move this illegal bus depot by the end of 2022. This means another year of diesel fumes for the people in Kairat. It also means that the EBRD will knowingly finance a client that violates national law and the EBRD’s Environmental and Social Policy.

Green Salvation, a Bankwatch partner in Almaty, Kazakhstan, tells the story. This blog post has been adapted from an article published in Russian here.

On 23 November, residents of Almaty’s Kairat district and Ecological Society Green Salvation appealed to the management of the EBRD. They informed the Bank about a violation of Kairat residents’ rights to a clean and healthy environment by the Bank’s client, Almaty’s electric public transport company.

According to the information posted on the EBRD’s website, the Bank plans to provide a loan of EUR 58.9 million for the Almaty Electric Public Transport project with the municipal public transport company Almatylectrotrans, an enterprise 100 per cent owned by the city. The company owns four bus and one trolleybus depots. One of these bus depots is located in Kairat.

The Bank considers the Electric Public Transport of Almaty project a ‘trigger project’ within the framework of the Green Cities programme. The development of Almaty’s Green City Action Plan (GCAP) will be included in the financing agreements for the project.

The essence of the problem

In mid-2019, a bus depot was organised in the Kairat district on the land of the Semirechye market, which is located next to residential buildings.

More than 100 buses leave the depot daily on city routes. The drivers’ workday starts at 5.30. The buses run on diesel fuel. When drivers start their engines to warm them up, a cloud of exhaust and fumes covers the apartment buildings, and there are loud noises. The workday ends at 23.00. Buses return to the park, and residents get another batch of noise and exhaust.

The Kairat bus depot was established in breach of the Sanitary and epidemiological requirements for the establishment of a sanitary protection zone of production facilities, approved by order number 237 of the Minister of National Economy (20 March 2015). The regulation states that:

The sanitary protection zone around the vehicle fleet in Kairat has not been established. A few metres separate residential buildings from noisy, polluting buses. For several years, local residents have been trying to relocate the fleet, but without success.

In order to determine whether the location of the car park was legal, at the end of 2019, Green Salvation sent inquiries at the request of the residents to relevant departments in the City of Almaty (also known as the City Akimat), such as the departments of Green Economy, Urban Planning Control, Land Relations, and Urban Mobility, as well as to the Department of Quality Control and Safety of Goods and Services, the Department of Ecology and the Specialised Environmental Prosecutor’s Office of Almaty.

From the responses received, it became clear that the decision on the location of the vehicle fleet was made without the appropriate approval from the authorised bodies. This is a violation of environmental, sanitary and land legislation.

The Department of Ecology for the city of Almaty replied that the project for assessing the environmental impact of the bus fleet was not submitted for consideration by state environmental experts.

On 23 December 2019, the Green Economy Department reported that Almatyelectrotrans did not send the Department the draft strategic environmental assessment documents for approval.

On 30 December 2019, Almatylectrotrans announced that it owns the land plot on which the bus depot is located. The designated purpose of the land plot is ‘for the construction and operation of a multifunctional logistics centre’.

Thus, placing a car park on this land on the basis of a lease agreement without changing the designated purpose of the land plot is a violation of Articles 4, 49-1 and 65 of the Land Code.

The Department of Quality Control and Safety of Goods and Services of the Turksib district (where Kairat is located) carried out an unscheduled inspection of the site. During the inspection, they found that the sanitary protection zone was not observed (the depot should be at least 300 metres from the nearest residential building); no justification for the existing sanitary protection zone was presented. Experts also carried out air intakes and noise measurements. Based on the violations identified, on 27 February 2020, they drew up a protocol on an administrative offense and issued an order to the park management to eliminate the violations.

On 11 March 2020, the Urban Mobility Department reported that in March the City Akimat signed a new agreement on the lease of a land plot in Kairat for the temporary location of the bus fleet. After the construction of a new park in the Alatau region is completed, the buses will be moved there.

However, in the fall of 2021, the situation worsened. As the weather has gotten colder, the amount of time needed to heat the buses has increased, and so too the hours of the day in which residents are disturbed. Residents continue to suffer greatly from noise pollution and exhaust fumes that penetrate into the interior of the living quarters. Vibrations are felt in some homes. The nearby residents’ physical and psychological health is deteriorating.

On 11 November, Green Salvation sent a request to the EBRD for the following information:

On 23 November, the Bank announced that the approval of the project is scheduled for the first quarter of 2022. The Non-Technical Summary and Stakeholder Engagement Plan will be updated prior to project approval and will be open for review.

2.3 The EBRD does not knowingly finance projects that contradict national laws, countries’ obligations under relevant international treaties, conventions and agreements, the scope of which is determined during the preliminary project appraisal;

On 23 November, residents of Kairat and Green Salvation, guided by these provisions from the EBRD’s policy, appealed to the Bank’s management with the following requests:

The vehicle fleet must be relocated to another location that fully complies with the requirements for placing an object that is in the hazard class III. Only after the transfer of the vehicle fleet can a contract be signed and a loan granted. The appeal was signed by 27 people.

We believe that the EBRD must reaffirm its commitment to the principles of respecting the right to an environment conducive to health and well-being. We hope that the Bank will consider the appeal of the public and take effective measures to restore the violated rights of residents. This will contribute to strengthening the credibility of the Bank and the successful development and implementation of the Green City Action Plan for Almaty.