Home > Blog entry > Time to iron out the EU budget differences – with a green shirt!

The EU budget summit, the much-anticipated showdown featuring Europe’s 27 member states, the European Parliament, the European Commission and European Council president Herman van Rompuy over how much EU funding – and for what – is to be spent in the 2014-20 budgetary period, is now on. And all the talk is of what exactly to wear to this event. 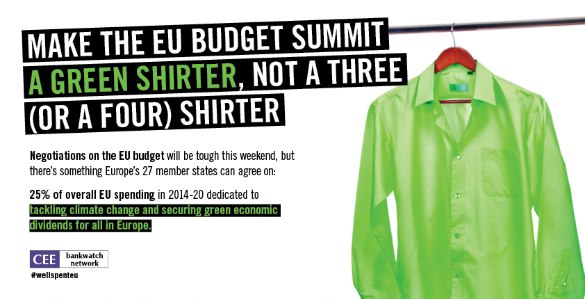 Here’s Alexander Stubb, Finnish Minister for Foreign Affairs, tweeting on his way to the summit in Brussels:

Flying to Brussels for what is hopefully the final stretch of EU budget negotiations 2014-20. Ironed only four shirts. Too optimistic? # MFF

These are not mere sartorial concerns, alas. Several weeks ago, Herman van Rompuy himself tweeted that this summit was shaping up to be the first ‘three shirter’ under his presidency. By this he was referring to the possibility that the scheduled two day summit – Thursday and Friday – would stretch into Saturday, requiring an extra shirt for strung-out summit participants.

Now there is intense speculation that, because of the huge differences of opinion ranged around the budget (how much total funding should be made available being the main obstacle), this budget summit could well become a ‘four-shirter’, ie stretching into Sunday. Apparently the building hosting the summit has instructed its restaurant to be ready for business on Saturday night.

A lot of talk about shirts, then, and so far the first sign of summit ‘shirtiness’ came this morning from UK prime minister David Cameron as he arrived for a bi-lateral ‘confessional’ (more EU summit jargon, alas, but ‘confessional’ just means ‘talks’ – there could, though, be connotations of divine inspiration being sought to ensure a budget deal) with van Rompuy.

That’s why today we’re encouraging Mr Cameron and Europe’s other leaders to make life easier for themselves – not to mention also for people living in Europe and our collective environment – by donning a green shirt.

Bankwatch and our campaign colleagues are calling for 25 percent of the EU budget for 2014-2020 to go to tackling climate change and securing green economic dividends for all in Europe.

No less a figure than Jacques Delors, the former president of the European Commission, this week set out the case for significant green spending to feature in the next round of EU spending – it’s well worth a quick read. The gains to be had from better green spending are many and, crucially, they are sustainable.

Adding extra urgency to the need for a rigorously green budget deal this weekend has been a string of highly alarming reports that have been published by major international bodies in the last week.

The International Energy Agency, the World Bank and the United Nations (as well as separately the UN Environment Programme) have all issued dire warnings about the rising rate of global carbon emissions and atmospheric warming. In tandem they have issued strong calls for major new investment money to be targeted especially at energy efficiency measures and clean renewable energy technologies.

For Europeans, the starkest warning comes this morning, just as the EU summit gets underway. The BBC reports that climate change is evident across Europe, citing a new report from the European Environment Agency out today.

The agency’s director, Jacqueline McGlade is quoted – in black and white terms – thus:

“Every indicator we have in terms of giving us an early warning of climate change and increasing vulnerability is giving us a very strong signal … It is across the board … it is in human health aspects, in forests, sea levels, agriculture, biodiversity – the signals are coming in from right across the environment.”

This is grim news. But just fancy – there is an investment tool designed to serve Europe that is under discussion right now. It too goes across the board, covering EU agriculture, transport, energy, health and a host of other sectors. It’s called the EU budget. Now is the time for Europe’s member states to set aside their budget differences and at least come together on ensuring that the future budget has green, climate-friendly spending at its heart.

You can get up to date info and gossip from the EU summit via @ceebankwatch and @SustEUfunds. If you’re using Twitter yourself, look out for the hashtags #euco and #MFF , and of course you make a good green case yourself by using #wellspentEU.