Home > Blog entry > Voices of support for Ukraine echo in Morocco: takeaways from the EBRD Annual Meeting in Marrakesh

The 2022 EBRD Annual Meeting was held in the city of Marrakesh, Morocco. Although taking place far away geographically, the topic of Ukraine dominated the agenda. Will the EBRD ensure its funds for the country’s reconstruction are used in the most efficient, green and inclusive way? 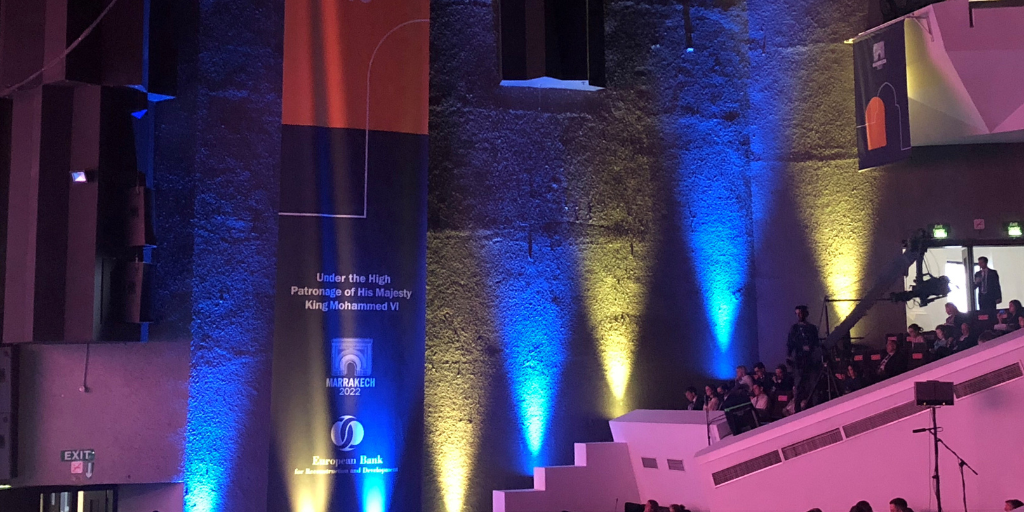 During the event about Ukraine at the Annual Meeting, the hall was lit in blue and yellow colours.

Supporting Ukraine while keeping Russia on the Board

When the war started, the EBRD immediately reacted by condemning Russian aggression and expressing its unwavering support for Ukraine. These words turned into action when the EBRD issued a support package for Ukraine and its neighbouring countries worth EUR 2 billion.

In addition to that, the Bank decided to close its offices in Russia and Belarus on 1 April 2022, pursuant to Article 8.3 of the Agreement Establishing the EBRD, and the Board of Governors resolved to suspend and modify access to the Bank’s resources by the Russian Federation and Belarus. The Bank is now trying to minimise activities in Russia and has stopped funding new projects in the two countries.

The EBRD, however, is more reluctant to formally suspend Russia’s and Belarus’ membership. The Bank’s shareholders argue that such step will have limited impact since Russia continues to be a member of other international financial institutions, such as the World Bank and the International Monetary Fund.

The EUR 2 billion resilience package will be directed to support Ukrainian businesses, economy and infrastructure, for example, through debt restructuring, liquidity and trade finance, and reform support.

A reconstruction programme will follow once conditions are in place. Immediate investments in Ukraine are risky as the war is still ongoing. Due to the dire economic situation caused by the war, Ukraine will rely as much as possible on grants, for example from the EU, rather than loans.

The EBRD made clear that they want to play a key role in the reconstruction of Ukraine. The Bank has been involved in the post-war Balkans reconstruction, and is currently active in the southern and eastern Mediterranean region. With such experience, the EBRD needs to make sure that mistakes made in these post-conflict areas will not be repeated now in Ukraine.

Reconstruction funding should go hand in hand with reforms, for example in anti-corruption and judiciary frameworks. Avoiding the misuse of the funds and strengthening the institutional resilience should be the priority for all donors. In that direction, Valdis Dombrouskis, the EU Commission Executive Vice-President, stated at the Annual Meeting that the EU will make sure that reconstruction funding will be linked with structural reforms to accelerate Ukraine’s integration in the EU.

During the meeting, Bankwatch also advocated for the EBRD to ensure strong integrity, environmental and social due diligence standards in the projects they fund.

In particular, the Bank should support transparent, green and inclusive reconstruction and ensure community participation in project development.

Good governance practices like transparency and public participation would reduce corruption and embezzlement risks in the reconstruction planning and funding.

To ensure that the funds are not wasted and are used to build new Ukrainian future, Bankwatch calls for:

One of the fields where investments will be needed is the energy sector. The contribution to energy system distribution and energy efficiency will be crucial in view of Ukraine’s synchronisation with the European Network of Transmission System Operators for Electricity (ENTSO-E), energy transition and climate commitments.

In recent years, the Ukrainian Ministry of Energy has been developing a hydrogen strategy as a solution for decarbonising the energy sector. However, to achieve this, Ukraine first needs to increase the share of renewable energy sources in its energy mix, because hydrogen production relies on excess energy in the system. Therefore, renewables should be one of the prioritised directions for investment.

Instead, the EBRD expressed interest in the topic of hydrogen produced by nuclear power plants.

Whereas renewables-based hydrogen is still a possible solution, the nuclear-based alternatives carry more risks than opportunities.

Bankwatch insists that the EBRD should avoid investments in nuclear facilities in Ukraine for the following reasons:

Moreover, the EBRD seems to be interested in financing gas infrastructure to use it for hydrogen transmission in the future. However, a considerable part of this infrastructure cannot be repurposed and such investments run the risk of locking in gas or ending up as stranded assets.

Time to excel for the Green Cities programme

The EBRD was investing in and cooperating with Ukrainian cities before the war. Seven of them are part of the EBRD Green Cities programme, some of which are partly or completely in rubble now. The EBRD continues to support the Ukrainian Green Cities such as Lviv, a city that has become the hub for humanitarian aid and refugee support in western Ukraine. Since 2015 the EBRD has implemented two frameworks for financing electric trolleybuses in Ukrainian cities and should build on this experience.

The EBRD Green Cities programme could serve as a platform for strategic vision and green reconstruction of the damaged cities.

To achieve this, the Bank will have to show its commitment to at least two of its strategic objectives while working on Ukraine’s reconstruction.

The first is ‘green’ – the EBRD should provide funding only to sustainable and fossil-free initiatives in line with the EBRD’s green transition goals. The second is ‘equal’ – putting an emphasis on inclusion of civil society and vulnerable groups, such as women and people with disabilities, in the decision-making processes. One of the unfortunate consequences of the war in Ukraine will be an increased number of disabled people. For this reason, strong accessibility requirements will be necessary when rebuilding cities.

The EBRD should play an important role in the reconstruction of Ukraine. The Bank has long-standing expertise in supporting the country, for example through the Ukraine Reform Architecture or the Chernobyl confinement. Continuous support for Ukraine is now needed not just for the benefit of the country, but also for the values that the Bank has committed to promote.