Skopje/ Strasbourg – The Standing Committee of the Bern Convention, a binding international legal instrument in the field of nature conservation for signatory countries, announced today (pdf) that it will open a case file to address the complaint made by Eko-svest about the planned hydropower plants in Mavrovo national park. 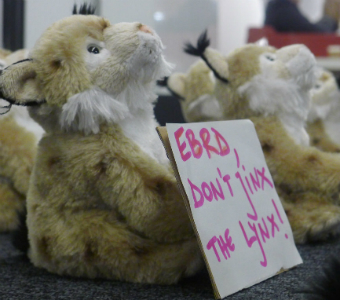 Skopje/ Strasbourg – The Standing Committee of the Bern Convention, a binding international legal instrument in the field of nature conservation for signatory countries, announced today (pdf) that it will open a case file to address the complaint made by Eko-svest about the planned hydropower plants in Mavrovo national park.

The complaint alleges that Macedonia is not complying with several articles (2, 4, 5 and 6) of the Convention and that the country did not make the necessary efforts to protect wild flora and fauna in the Mavrovo protected area when it decided to construct 18 hydro power projects on the territory of the park.

One of the largest projects planned, the Boskov Most HPP project, involves the construction of a 68 MW hydropower plant including an accumulation dam of 33 meters. The construction would seriously jeopardise the small population of Balkan lynxes living in the region, a species on the verge of disappearance, out of which around 40 specimens still survive in Macedonia today.

“The Bern convention Standing Committee found our claims that the Balkan lynx would be close to extinction in case the Boskov Most and other hydro projects are finalised very persuasive,” explains Ana Colovic Lesoska, Bankwatch campaigner in Macedonia. “The Committee said it would look into the case and carry out an on the spot appraisal to establish the level of threat to biodiversity posed by this project.”

The Boskov Most project has been marred with controversy in addition to the biodiversity concerns. It has been advancing without a proper comprehensive environmental impact assessment, which is problematic in itself but also from the point of view of breaching the standards of the European Bank of Reconstruction and Development, which committed to a loan for the project. Moreover, recent evidence raises serious doubts about the economic viability of the project. To date, no transmission line that could connect the dam to the grid has been planned for, and the EBRD is yet to initiate an economic feasibility study for the project. Finally, even the environmental permit on the basis of which works would be started, as incomplete as it was, has expired.

“This sudden attention from the Bern Convention Standing Committee should make it clear to our authorities that this project cannot go ahead like this, with so many aspects of it being problematic,” says Ana Colovic Lesoska. “And the EBRD, as a responsible public institution accountable to taxpayers in the EU and elsewhere, should step out of this project at least until all the doubts related to it are cleared.”

After the on the spot appraisal, the expert appointed to conduct it will draw recommendations to be met by Macedonia. If the country complies with the recommendations and shows good faith in collaboration, the case will be closed. If Macedonia does not comply, the case will remain open and the Standing Committee could recommend other means to mediate the problematic situation. In any case, the attention of the Council of Europe on these issues has historically brought about dramatic changes to initial governmental plans in other countries, so similar effects can be expected in Macedonia.