Bijeljina, R. Srpska, Bosnia and Herzegovina, 6.10.2014: The Environmental Impact Assessment (EIA) study for the planned Ugljevik III lignite power plant near Bijeljina in Bosnia and Herzegovina contains data on the plant’s SO2, NOx and dust emissions which is demonstrably false, and the study is missing key information needed to assess the plant’s environmental impact, according to a new analysis submitted by NGO Center for Environment to the responsible Ministry today. 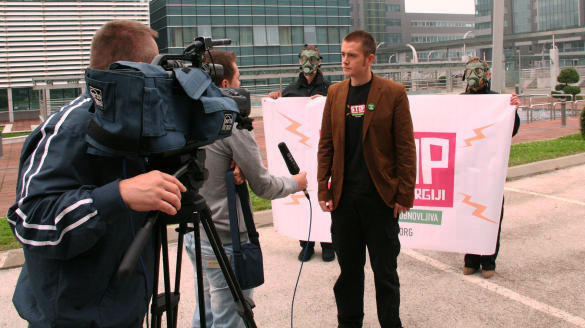 Bijeljina, R. Srpska, Bosnia and Herzegovina, 6.10.2014: The Environmental Impact Assessment (EIA) study for the planned Ugljevik III lignite power plant [1] near Bijeljina in Bosnia and Herzegovina contains data on the plant’s SO2, NOx and dust emissions which is demonstrably false [2], and the study is missing key information needed to assess the plant’s environmental impact, according to a new analysis [3] submitted by NGO Center for Environment to the responsible Ministry today.

[See photos from the report’s launch event below.]

The environmental permit for the new coal unit which currently subject to a legal challenge in Republika Srpska [4] was issued on the basis of the contested environmental study in July 2013. The new analysis commissioned by Center for Environment and carried out by Polish expert Dr Leszek Pazderski [5] demonstrate that the environmental study is missing several key elements, for example:

These omissions together with the incorrect emissions figures mean that the EIA does not enable an assessment of the plant’s impacts on the environment and does not fulfil the minimum requirements of the EU EIA Directive, which is legally binding on Bosnia and Herzegovina under the terms of the EU-backed Energy Community Treaty.[6]

“This is the latest in a series of environmental approvals for risky projects in Bosnia and Herzegovina which have been waved through with very little oversight”, said Igor Kalaba of Center for Environment. “This has already caused problems in the cases of the Stanari coal power plant, which will not be in line with the EU Industrial Emissions Directive, and in the Ulog hydropower plant, in which two workers were killed by landslides in 2013 – incidents which might have been avoided if the project’s impact on land stability was better covered in the Environmental Impact Assessment process”.[7]

“With such shocking findings about the quality of the environmental study for Ugljevik III, the Ministry now needs to annul the environmental permit if it wants to uphold the law, protect the inhabitants of the Ugljevik area and avoid serious and expensive problems in the future”, added Natasa Crnkovic of the Center for Environment.

[1] The 600 MW lignite power plant Ugljevik III, promoted by Russian billionaire Rashid Sardarov’s Comsar Energy and constructed by the China Power Engineering and Consulting Group Corporation (CPECC) is planned to be built near the site of the existing Ugljevik plant in the north-east of the Republika Srpska entity of Bosnia and Herzegovina. The plant has raised concerns as existing air pollution in the area is high, and it seems unlikely that the new plant will comply with the pollution limits stipulated in the EU Industrial Emissions Directive. Its net efficiency level is expected to be very low at only 34.1%.

[2] The data provided for expected emissions of SO2, NOx and dust are inconsistent. The allowed emissions levels according to the Industrial Emissions Directive, and with which the plant is purported to comply, are:

Thus the ration of hourly and annual concentrations of emissions of these substances must be = 20:15:1. However this is not the case, meaning that the data is clearly false.

[3] The analysis is online at:
https://bankwatch.org/sites/default/files/analyis-Ugljevik-06Oct2014.pdf

[5] Dr hab. Pazderski is a researcher and lecturer at the Nicolaus Copernicus University in Poland.

At the Ulog hydropower plant project the Republika Srpska entity government gave the project promoter EFT an environmental permit to construct a 35 MW hydropower plant on the upper reaches of the stunning River Neretva in Bosnia and Herzegovina. In September 2012 Sinohydro signed an EPC contract with EFT to carry out the works, and some works on access roads started to be carried out. In April 2013 a construction permit was issued, but then in early July 2013, within just four days of one another, two workers died in separate landslide incidents. Since then, preparatory works have grind to a virtual halt. Recent pictures of the site are available here:
http://zeleni-neretva.ba/index.php?option=com_content&task=view&id=303

Photos from the report’s launch event 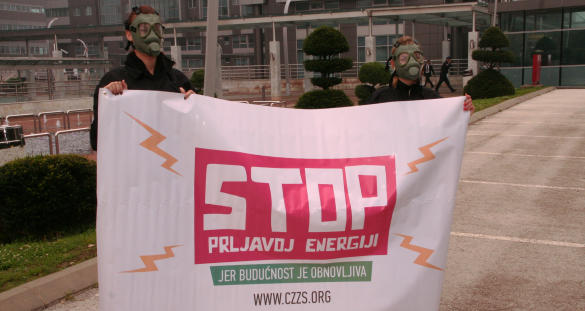 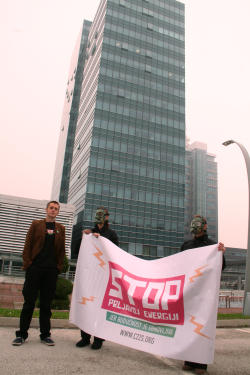