Brussels – Sixteen outdated coal power plants in the Western Balkans are a public health and economic liability for the whole of Europe, with people in the EU bearing the majority of the health impacts and costs, according to a new report [1] by the Health and Environment Alliance (HEAL), Sandbag, Climate Action Network (CAN) Europe, CEE Bankwatch Network and Europe Beyond Coal. The European Union (EU) needs to use all of the tools available to improve health, prolong lives, save health costs and increase productivity both in the EU and in the Western Balkan region. 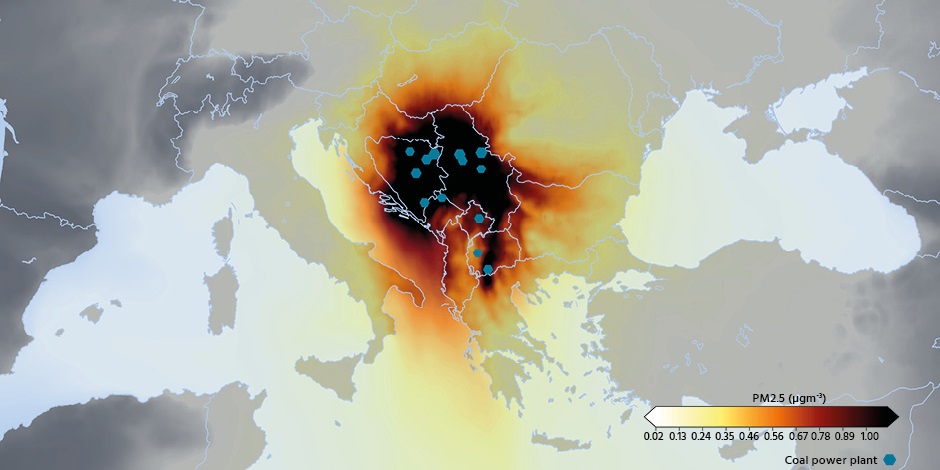 Based on the methodology by the World Health Organization (WHO) and the European Commission, the Chronic Coal Pollution report shows that every year air pollution from Western Balkan coal power plants is responsible for an estimated 3,900 premature deaths, 8,500 cases of bronchitis in children and other chronic illnesses. The health issues these plants cause adds up to lost productivity and health costs of up to EUR 11,535 million.

The old, inefficient and substandard coal power plants in the Western Balkans emit an incredible amount of air pollution every year, impacting the health of people across the continent. In 2016 alone, 16 of them spewed out as much sulphur dioxide (SO2) pollution as the entire fleet of the EU’s 250 coal power plants. Just one power plant, Ugljevik in Bosnia and Herzegovina, emitted more SO2 than all German coal power plants put together. And levels for particulate matter and nitrogen oxides are equally alarming.

The European Union bears the majority of the health impacts, with 2,013 premature deaths in 2016, asthmatic children suffering from  symptoms for a combined total of over 36,400 days, an estimated 1,418 hospital admissions and over 600,000 lost working days. European Union countries also bear the majority of health costs, up to EUR 5,899 million, while the burden on the Western Balkan countries is estimated to be up to EUR 3,648 million every year (other countries: EUR 1,988 million).

‘Air pollution knows no borders and is still an invisible killer in Europe. A significant amount of pollution from the Western Balkans travels into the EU. Pollution from the Western Balkans adds to the already poor air quality in the EU countries, making it harder especially for the adjacent EU neighbours to meet air quality standards. It is high time that EU policy-makers step up efforts to clean up the air and decarbonise the power sector in the Southeastern European region,’ commented Vlatka Matkovic Puljic, Senior Health and Energy Officer at HEAL, and lead author of the report.

The Energy Community Treaty, the international treaty working since 2006 to integrate the energy markets of the EU and those of its neighours, set a deadline for Western Balkan countries to comply with EU pollution control legislation by 2018. Regrettably however, meaningful action towards healthier energy systems, investments and retrofits in energy production across the Western Balkans has largely been delayed.

‘Western Balkan coal is a burden on people’s health, the climate and the wider economy. It is therefore in the interest of people across Europe – in the EU and the Western Balkan countries – to enforce Energy Community Treaty rules and to swiftly phase out this polluting, health-harming and outdated technology.  Climate action, pollution control and air quality must also be prioritised in the EU accession process. As the EU moves to net zero greenhouse gas emissions, Western Balkan countries must also phase out coal, not just because it is a chronic air pollutant but also one of the biggest climate change culprits,’ said Igor Kalaba, Energy Policy Coordinator for Southeast Europe at CAN Europe.

Furthermore, policy makers in the region remain determined to finance and build new coal plants, mainly with support from Chinese banks. Most of these plants would not adhere to the EU’s latest pollution control standards.

‘Fossil fuels are a health, financial, and environmental liability. Rather than investing in yet more outdated coal power plants, Western Balkan leaders need to adopt a forward-looking approach and strengthen their efforts to reduce energy wastage and increase the share of sustainable forms of renewable energy. This would bring the EU accession countries in line with the EU’s decarbonisation goals, improve public health, and avoid the risk of stranded assets,’ commented Ioana Ciuta, Energy Coordinator at CEE Bankwatch.

CEE Bankwatch Network is the largest network of grassroots, environmental and human rights groups in central and eastern Europe. Together with its 17 member groups in 14 countries, it monitors public finance institutions like the European Investment Bank and the European Bank for Reconstruction and Development that are responsible for hundreds of billions of investments across the globe.