Brussels, Belgium – Ahead of anticipated final agreement in the European Parliament this week (Tuesday November 19) on the forthcoming EU budget (for the period 2014-2020), CEE Bankwatch Network and Friends of the Earth Europe have today published data that shows how eight central and eastern European countries are failing to tap the climate potential of future EU billions. 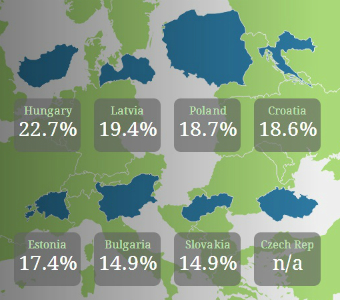 Brussels, Belgium – Ahead of anticipated final agreement in the European Parliament this week (Tuesday November 19) on the forthcoming EU budget (for the period 2014-2020), CEE Bankwatch Network and Friends of the Earth Europe have today published data that shows how eight central and eastern European countries are failing to tap the climate potential of future EU billions.

With just over a month to go until the start of the new EUR 960 billion seven-year budgetary period, the analysis of the countries’ EU spending plans shows wide variations in commitments to climate spending, with only Hungary exceeding a commitment of 20 percent on spending for climate action.

Markus Trilling, EU funds coordinator for Bankwatch and Friends of the Earth Europe, commented: “Earlier this year, the member states got behind a European Commission proposal that 20 percent of the next 960 billion euro EU budget be dedicated to climate measures. Such a financial commitment represents a tremendous opportunity to kick start the decarbonisation of central and eastern European countries which are among the most energy intensive in the EU.

“Cohesion Policy, which targets among other things energy and transport infrastructure, has the biggest potential to drive decarbonisation in the region. Hundreds of billions of euros of investments are needed over the next decades for this transformation, yet only one out of eight CEE countries analysed – Hungary – is currently planning to dedicate 20 percent of available funds for climate measures.”

The NGO analysis, carried out as member states have been preparing and submitting their future EU spending plans to the European Commission, finds that in some countries renewables are being sidelined and insufficient investments into smart grids are envisaged. Emissions boosting road infrastructure and airports also look set to benefit at the expense of sustainable transport.

Moreover, despite partnership with citizens and local communities being a core element of the new EU budget architecture, civil society has been insufficiently included in the planning process across the region.

Ondrej Pasek, Bankwatch national campaigner in the Czech Republic, whose country fares worst in the new analysis, commented: “The rhetoric of Czech officials involved in EU funds programming naturally conforms with EU environmental strategies and objectives, yet all the concrete steps being taken show that our authorities intend to continue with carbon-intensive energy, resource and transport projects.”

With only weeks remaining before member state EU Budget plans for 2014-2020 are finalised, Bankwatch and Friends of the Earth Europe are calling on the European Commission to maintain vigilance over the member states in order to ensure that the opportunity provided by the ’20 percent for climate’ commitment is not squandered by countries in central and eastern Europe.

On a scale of 1 to 18, the CEE countries analysed have scores from 5 (the Czech Republic) to 9 (Slovakia).

The scores were compiled on the basis of assessments made by experienced national EU funds campaigners on issues related to the inclusion of climate change considerations into national programming, including: the existence of mitigation and adaptation strategies, and the creation of an institutional set-up geared to monitor the implementation of climate-related measures.