Romania could well be on path to a sustainable, prosperous economy if decision makers acknowledge growing GDP in tandem with dropping energy demand, a report released today by Bankwatch Romania argues. 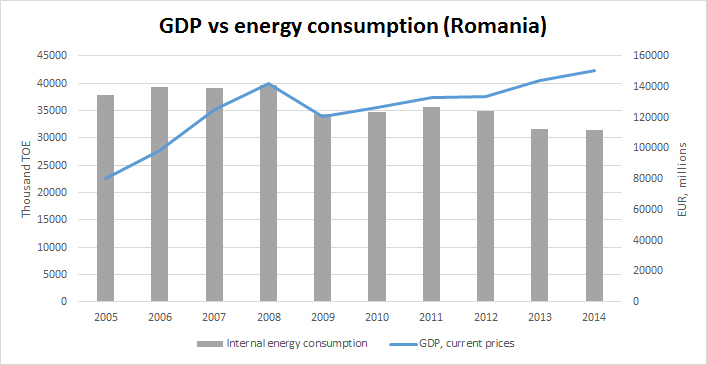 Romania could well be on path to a sustainable, prosperous economy if decision makers acknowledge growing GDP in tandem with dropping energy demand, a report released today by Bankwatch Romania argues.

An English version of the executive summary can be found at:
https://bankwatch.org/sites/default/files/decoupling-execsummary-05Jul2016.pdf

The full report in Romanian can be found at:
https://bankwatch.org/sites/default/files/decoupling-RO-05Jul2016.pdf

The EU has already committed to a long term transition into a decarbonised economy, primarily in light of the urgent need to tackle the climate crisis. Yet, some governments have not.

The report tackles the common assumption that continued economic growth necessarily entails a rise in energy consumption. In fact the new analysis shows that this is not what happens in reality, in Romania and in other EU countries.

Since the 2011 UN report that first introduced it, the concept of decoupling GDP growth from energy consumption is gradually being incorporated into more and more development policies.

In Romania, however, policy makers are yet to recognise this increasingly mainstream paradigm. Official estimates still see energy consumption in the country growing by 20%-100% by 2030. At the same time, the Romanian energy ministry acknowledges that since 2009 the country’s GDP has been growing while energy consumption has been falling, but it has so far failed to factor this trajectory in the ongoing development of a new national energy strategy.

Romania has one of the highest rates of economic growth in Europe. Nevertheless, given that energy intensity in the country is twice as high as the EU average, Romania also has a very high potential to cut its energy consumption, particularly in the housing and transport sectors, the report authors state.

Alexandru Mustață, campaign coordinator at Bankwatch Romania and coordinator of the report, says:

“That Romania has virtually already met its 2020 target for greenhouse gas emissions reduction with no special effort only shows there is still a vast potential to deepen these emissions cuts while ensuring prosperity for society now and in the future. Romanian decision makers need to recognise and embrace the trend of a lower carbon economic growth.”

Realising this potential would require a change of mindset in government ministries and a long term vision. The report lists a number of recommendations for ways to put the decoupling trend into motion including prioritising investments in energy efficiency, reducing transport sector emissions, and boosting the deployment of renewable energy sources. 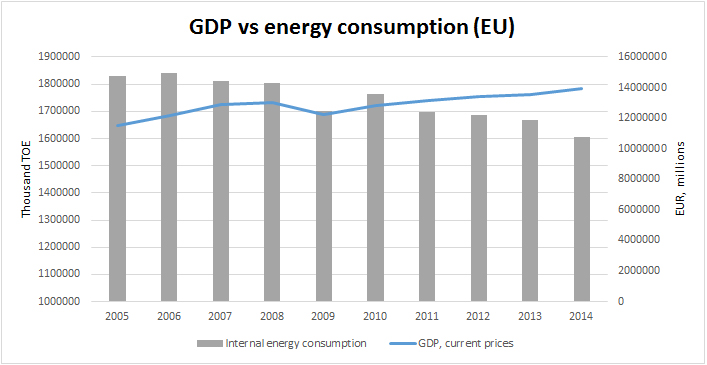