Dozens of activists from across Europe have protested and dropped a banner at an international road in Kresna gorge, Bulgaria, to protest against the lack of action from the European Commission and the Bulgarian government to save the key EU-protected wildlife site. 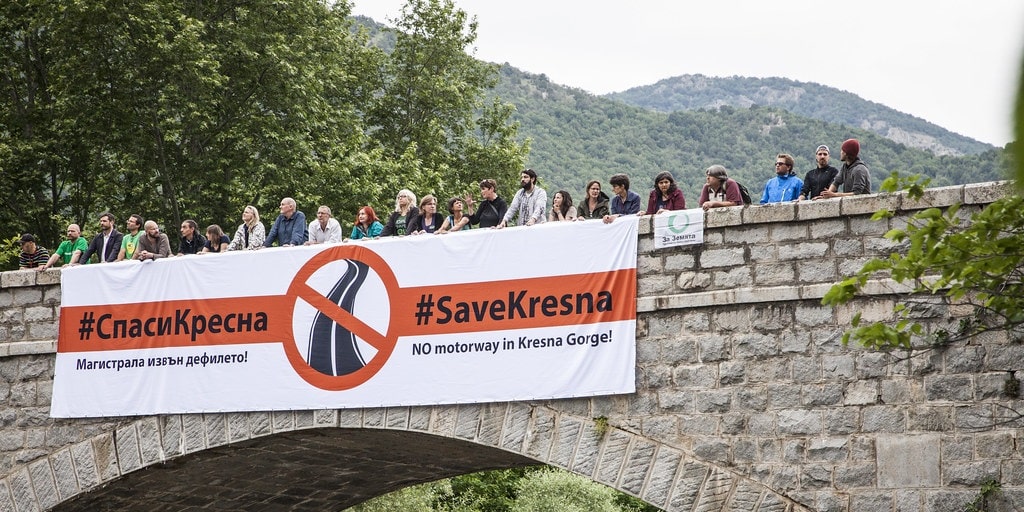 Photo by Ivan Donchev, Friends of the Earth Europe-min

Over 40 senior members of the Friends of the Earth Europe network joined the protest in Kresna gorge ahead of their AGM in the region, and also met with the local civic platform which is campaigning against the motorway.

The Bulgarian government plans to build a part of the proposed Hamburg to Athens motorway through the Kresna gorge – identified as an exceptional European biodiversity hotspot due to its unique abundance and diversity of nature and wildlife.

Loss of wildlife in the gorge already breaches EU environment law. The motorway construction threatens the survival of many unique species in the gorge in breach of EU law, and is mired in corruption – despite being funded by the EU.

Both the European Environment Commissioner Karmenu Vella and more recently Commission President hopeful Frans Timmermans have failed to take action to halt nature loss in the gorge in line with EU law, and move the planned motorway section out of the nature hotspot. The local community is also staunchly against the project.

Friends of the Earth Europe director Jagoda Munić said: “We are facing a global ecological crisis that demands governments urgently change track. Driving a motorway through one of Europe’s top wildlife zones, at EU taxpayers’ expense, shows a dinosaur mentality that in today’s age is no longer acceptable. Since European law is clearly broken it is essential that the European Commission starts immediate proceedings to stop the destruction of our nature.”

Friends of the Earth has repeatedly asked Environment Commissioner Vella and Commission Vice-President Timmermans to intervene against the Bulgarian government. With just weeks left of their mandate, and with Timmermans hoping to be the next Commission President, time is running out to save the gorge before the start of major construction works. Bulgarian civil society has produced viable alternative routes for the motorway that would bypass the gorge.

Za Zemiata/Friends of the Earth Bulgaria nature campaigner Desislava Stoyanova said: “Bulgaria is blessed with extraordinary and irreplaceable nature that is threatened by projects like this EU-funded motorway through Kresna Gorge. Civil society is the core of our democracy, and our government must listen to our calls for the rule of law to be followed and this motorway to be routed away from this protected wildlife site.”