Warsaw – Actions are being organised today in several European capitals to protest the attendance of the European Bank for Reconstruction and Development at the International Coal and Climate Summit, organised by the World Coal Association in parallel to the United Nation’s climate conference in Poland. 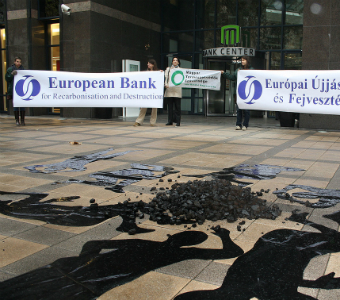 Warsaw – Actions are being organised today in several European capitals to protest the attendance of the European Bank for Reconstruction and Development at the International Coal and Climate Summit, organised by the World Coal Association in parallel to the United Nation’s climate conference in Poland.

Groups participating in the protest actions [1] argue that the EBRD’s presence at the Coal and Climate summit – which critics say undermines the spirit and substance of the UN process [2] – is a worrying signal that the bank intends to continue funnelling public money into carbon-intensive projects.

The EBRD is currently reviewing its Energy Strategy, which guides its investments in the sector, but the bank’s participation at the Summit suggests that the new strategy will not seriously address the threat of climate change, say the groups.

As delegates from around the world gather in Warsaw for the nineteenth annual climate convention, overwhelming evidence from the scientific community is unequivocal about the need to keep at least two-thirds of known fossil fuel reserves in the ground in order to limit rising global temperatures below the agreed goal of two degrees Celsius.

Yet the EBRD plans to continue investing in fossil fuels, including coal, according to a draft of the energy strategy presented this summer. Between 2006 and 2011, while the current strategy was in place, 48 percent of the EBRD’s EUR 6.7 billion portfolio went to fossil fuels. Support for coal projects increased during this period, from EUR 60 million to EUR 262 million. [3]

Fidanka McGrath, Bankwatch EBRD co-ordinator said: “While the International Coal and Climate summit beats the drum of a so-called ‘cleaner coal,’ this threadbare veneer is a last ditch spin effort by the coal lobby to prop up an outdated and dying industry. How then could anybody take the EBRD seriously when it says it is committed to addressing the challenges of climate change with its new energy strategy?”

“If no major changes are introduced to the energy strategy, EBRD shareholders might as well vote to change its name to the ‘European Bank for Recarbonisation and Destruction’. Coal projects won’t reconstruct and they won’t develop the bank’s countries of operation, but they will maintain a status quo that pushes the world closer to the brink of climate catastrophe,” added McGrath.

Over the summer more than one hundred organisations commented on the draft energy strategy and asked the EBRD to follow its sister institution the European Investment Bank and introduce criteria to restrict lending for coal power and coal mining projects [4].

The new energy strategy is expected to be approved by the EBRD Board of Directors on 10 December.

[1] Images from the actions are available at 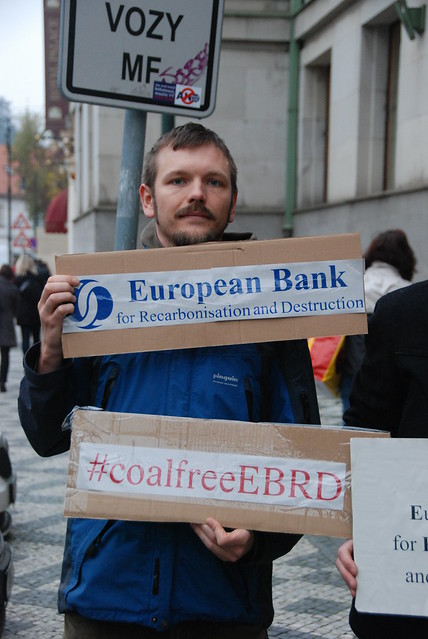 [2] The International Coal and Climate Summit is organised under the theme of ‘clean coal technologies, opportunities and innovations’: more information and background to the claims of clean coal are available in this briefing:
http: bankwatch.org/documents/no-such-thing-as-clean-coal.pdf

[4] Among the recommendations are a shadow carbon price and an Emission Performance Standard set at a level of at least 350 gCO2/kWh.