Home > Publications > How many IFIs – and how many millions – does it take to make a safe road?

How many IFIs – and how many millions – does it take to make a safe road?

Last month, residents in the village of Krupets in Ukraine blocked the Kyiv-Chop road that runs straight through the village. Their protest – the road was blocked off for more than 90 minutes – came as a result of horrifying car accidents (including ten fatal car accidents since the beginning of this year) that have taken place in their community due to the lack of a speed limit, street lighting and appropriate traffic signs. The regional prosecutor office has initiated a case against the regional roads agency for alleged violation of road and traffic safety standards.

Lethal car accidents, an increasing number of road traffic victims, riots in villages along the route of the road – this is the current reality of the Kyiv-Chop highway, one of the most important arteries in Ukraine’s road network.

You might be thinking that this is no doubt a very old and unsafe road, in need of rehabilitation and upgrading to European standards. In fact, for more than a decade now, the Kyiv-Chop highway has had over half a billion euros thrown at it for these very purposes.

Since 2000 the European Bank for Reconstruction and Development (EBRD) has been providing financing for the rehabilitation and upgrade of the M06 Kiev-Chop highway to European standards. In 2006, the Third Project “Kiev-Chop M06 Road Rehabilitation” got underway – alongside the EBRD’s contribution was co-financing from the European Investment Bank (EIB). The total amount of money disbursed to date for three rehabilitation and upgrade projects is EUR 575 million. 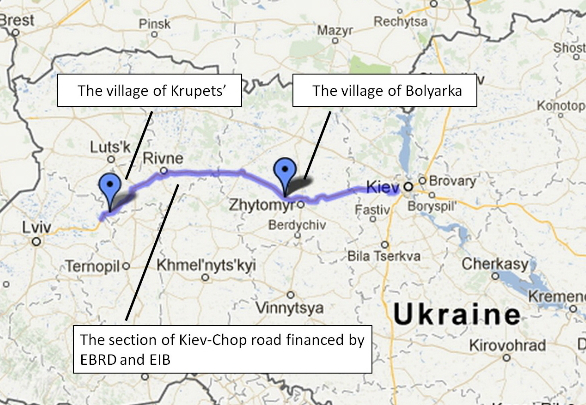 The Ukrainian government had been under pressure to complete the third project, involving the majority of the highway’s length, ahead of this summer’s Euro 2012 football championship. This was duly achieved – online forums dedicated to roads and driving in Ukraine were awash with enthusiastic comments, such as: “Wow, what a road! After rehabilitation I’ve been driving at 150 km/h without even noticing it”. While the roadbed itself is of good quality, the interests of local communities that live along the road have been largely ignored. 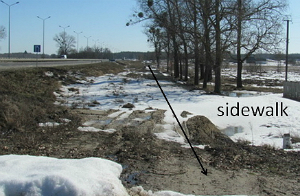 See more images on our blog

The protests in the village of Krupets are by no means unique. In April 2012 Bankwatch informed the EBRD about the situation in the village of Bolyarka, another unlucky settlement along Kiev-Chop and situated 260 kilometres from Krupets. As a result of missing pedestrian pavements, villagers are forced to walk on the road itself as heavy trucks speed by at 120 km/h in the village.

Further areas of concern include: no single traffic light has been installed; the street lightning stopped functioning immediately after Euro 2012 was over; the private property of villagers has been damaged due to faulty drainage construction, and; the road’s construction does not allow for horse driven carts to safely cross the road, this in a village where half of the population are farmers and rely on horses.

It seems, however, that even appeals from the EBRD have not been sufficient to influence Ukravtodor and ensure construction – finally – of a couple of pedestrian walks. Nothing has changed since 2010 when villagers started knocking every possible door – Ukavtodor, the Turkish construction company Gulsan, the UK consulting company Hyder, the regional authorities and the EBRD. Half a billion euros of European public money has not been enough to provide for traffic signs being installed correctly.

The Kyiv-Chop highway, as the name suggests, is no road to nowhere. For those affected communities along its route seeking redress for project failings, though, they might as well be living in nowhere land.