Making sure EU funds pave the way to cleaner transport

The European Parliament has called for ‘sustainable transport’ to be a top priority for the next round of EU cohesion spending. Does this mean that we’ll be seeing a new generation of genuinely clean transport projects across Europe? Not just yet, argues Nina Renshaw of sustainable transport campaign group T&E.

The negotiators arguing over how EU cohesion money should be spent between 2014 and 2020 still have a long road ahead of them. It’s not yet even certain how much money is at stake, but if the current funding period is anything to go by, we can expect around EUR 10bn per year to be spent on transport projects. Compared to how much of their own money national governments put into transport projects, this isn’t huge, but what is for sure is that the rules dictating how EU funds can be spent are a game changer.
As Bankwatch’s ‘Flights of Fancy’ report points out, the offer of preferential funding rates for certain kinds of project can tip the balance. In the case of Poland this has lead to a slew of regional airports and rail links to serve airports that might not have got off the ground otherwise. 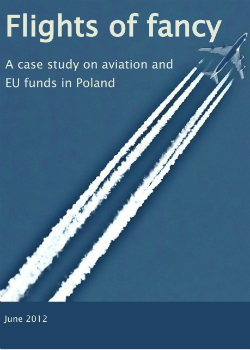 EU transport spending is at a crossroads. Do we choose the path to promote projects which will cut transport greenhouse gas emissions by at least 60 percent to 2050, or do we stick to the usual route and continue pumping out more emissions far beyond that deadline? Merely calling for ‘sustainable transport will not achieve much. Planners and project promoters must be required to show that there will be real long-term benefits for the environment, as a condition for receiving future EU funds.

The balance now should be tipped in favour of projects that really decrease emissions and offer value for money for users, such as those in urban areas, commuter rail links, or road-user charging systems that encourage drivers to share and to switch to cleaner cars.

That means the EU should take airports off their wish list. But it doesn’t mean a free pass for all rail projects. Take rail links to airports; they’re not climate-friendly if they serve to get more people into planes. Similarly, should an underground metro system be first choice if a new fleet of low-emission buses is cheaper? Clearer EU guidance and incentives are needed to steer national governments in a smarter direction this time around.