It is coming up for three years since the EBRD’s 2009 Annual Evaluation Overview Report “alerted Management to develop a new Operation Policy to cover all forms of non-energy related extraction of natural resources (mining policy)”. The EBRD does not appear to have been in any great rush with the preparation of this policy, and one has to wonder how long the bank will allow for the new policy to be consulted with the interested public. More importantly, how influential will public input be in setting the policy objectives and requirements?

The formal approach of consulting the public that the EBRD usually employs includes providing the public with the opportunity to comment on a draft text of the new policy in question, and the organisation of consultation meetings (for example, in London and Moscow), where NGOs and interested individuals can raise in person their concerns and recommendations. The result of these consultations can be fairly limited with sometimes minimal, if any, input taken on board after the policy has been pre-decided conceptually at several levels of decision-making within the EBRD.

A report by the independent US-based expert Robert Moran (published January 31 this year) into the Kumtor Mine in Kyrgyzstan, the largest gold mine in Central Asia managed by a western company, has found a wide range of abuses carried out and tolerated by the mine’s owner and operator, the Canadian company Centerra Gold.

The EBRD has been providing debt and equity financing to Centerra Gold since 1995, yet the bank has been unable to reassure critics of the Kumtor mine by failing to provide transparent information about the mine’s impacts or the company’s performance and compliance with environmental and social standards.

Included in hydrogeologist and geochemist Moran’s report is evidence that:

>> Kumtor Gold has mined out parts of two local glaciers (Davidov and Lysyi) to access the ores.

>> The company has been disposing waste rock on the glaciers, aggravating their melting and thus threatening the entire local water system whose main source are the glaciers.

>> Petrov Lake, at the same time the biggest regional contributor to the trans-boundary Naryn River and the mine’s main water source, is being polluted.

>> The water returned to the hydrological system after mining is polluted: water testing has shown that numerous chemical pollutants have high concentrations around the mine area, sometimes exceeding international water quality standards; local fish populations have been decreasing.

>> Since mining began, Kumtor Gold has produced 89 million tons of tailings, some of which are deposited in unstable conditions, potentially causing a hazard in case of an earthquake; yearly, the company uses about 3650 tons of cyanide whose concentration in the waters released from the mine is unstudied.

>> Access to information for the public is restricted while state authorities do not have the means to properly monitor the company.

The report is available for < ahref="/sites/default/files/Kumtor-MoranReport-31Jan2012.pdf">download as pdf.

See a photo gallery from the Bankwatch visit to Kumtor. 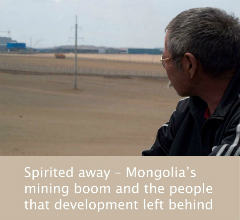 A new report from CEE Bankwatch Network, urgewald and OT Watch, entitled “Spirited Away – Mongolia’s mining boom and the people that development left behind”, accompanied by an original video produced by Bankwatch, sheds light on the forgotten aspects of one of the biggest business stories of today: Mongolia’s planned public offering of the state-owned Erdenes Tavan Tolgoi and the rights to one of the world’s largest untapped coal reserves.

The EBRD is a special focus of the report as the bank is currently preparing its new Mining Operations Policy. The bank has already invested in the development of the Tavan Tolgoi coal deposit and is considering investment in the Oyu Tolgoi gold mine, as well as in several other mining projects in Mongolia.

Regine Richter, a co-author of the report and finance institutions campaigner at urgewald, offers some sobering thoughts about the global impacts of Mongolian coal mining and the role being played by banks like the EBRD: “Mongolia possesses 12 billion tons of proven coal reserves, while the carbon content of globally known fossil fuel reserves is already five times more than the amount that must be adhered to over the coming decades, if we are to limit climate change to manageable levels. Therefore the climate impacts of coal mining in Mongolia should be given serious consideration, if not by the Mongolian government, then definitely by international public banks financing these mining projects, who should be using taxpayers’ money to prevent climate change, not exacerbate it.”

The ‘Spirited Away’ report is available for download as pdf.

The Bankwatch video can be watched on our blog

On the mooted mining policy, Bankwatch has instead attempted on a number of occasions to engage into preliminary dialogue with staff and the board of directors of the EBRD in order to put forward some proposals on how the policy can address environmental and social concerns. The result so far has been discouraging – our questions and suggestions have met with silence.

The need for transparent monitoring and communication of results

Bankwatch has raised several issues with the EBRD in relation to its mining investments, and first and foremost are those examples of investments into mining projects that carry immense risks or have severe impacts on the environment and local communities.

Recent reports by Bankwarch, its partners and an independent commission from the Kyrgyz parliament (see sidebar) describe how gold mining and the inadequate management of mining waste at the Kumtor mine has already polluted water resources, caused long-term health damage to local people and accelerated the melting of glaciers. A report from Mongolia’s Gobi desert has voiced the concerns of local people who are marginalised in decision-making and who receive piecemeal information that cannot dispel their fears over ever-worsening water scarcity and air pollution from coal and gold mining operations.

The feedback from the bank on such projects rarely clarifies or resolves the questions raised. More often than not the EBRD is convinced that its assessment of the projects is impeccable and often replies with information provided by clients. Clearly mining companies have more information on their own operations than do local communities or NGOs, and access to up-to-date and accurate data is not easily obtainable by the public. However, the EBRD’s over-reliance on information from the businesses it finances results in a lot of contradictions with independent accounts. At the same time the EBRD does not publish much in the way of results from monitoring that it carries out – an area that should be given due attention in the new mining policy, if the bank is to demonstrate the positive results of public money spent on mining.

To diversify or not to diversify – where should public money be prioritised?

Yet the glitter of gold is particularly tempting nowadays in times of unstable financial markets and ever increasing interest in investments in the ancient currency, gold. But how long until this particular bubble bursts, and how confident is the EBRD of blowing more air into it? The bank will no doubt see enough return on its investments, but the long term impact for commodity export dependent countries will be painful.

Mongolia is a case in point, where the EBRD’s investments in the non-mining sector are insignificant. Although in its 2011 Transition Report the bank acknowledged the “key risk is a possible renewed downturn in global commodity prices”, the EBRD justifies the bias in its portfolio because of a lack of opportunities in other sectors and, ultimately, the role that states must take in deciding their own strategies for sectoral and macroeconomic development. While indeed it is up to a country and its people to choose its own development path, why should the public money of European taxpayers myopically follow the mining spree instead of being prioritised to help deliver stable and sustainable development.

How about the climate? The integrity of the EBRD’s climate action finance

Finally, since it includes coal mining, the new mining policy of the EBRD is linked to climate change. The problem here is that fossil fuels – and coal in particular – are the subject of several other EBRD policies and initiatives, namely the Environmental and Social Policy, the Energy Policy, as well as part of the Sustainable Energy Initiative.

The result is a lack of policy coherence and clear guidance on investments in energy and mining projects, especially ones involving fossil fuels. It has been suggested that this is a convenient approach, allowing the EBRD to legitimise the widest possible range of investments.

For example, while the EBRD boasts of achieving a record level of sustainable energy investments in 2011 of almost 30 per cent of the EBRD’s total investments of EUR 9 billion, part of this total includes controversial projects for energy efficiency in coal mines and coal-fired thermal power plants. These projects may increase efficiency and decrease CO2 emissions per unit of production, but often lead to further locking of countries into coal energy infrastructure, as well as to lifetime increases of emissions which, tellingly, the EBRD is not so keen to measure.

It is clear that the EBRD’s approach to climate action finance lacks integrity and hence the increasing calls for a genuine policy response in line with climate science and the climate policies of the EBRD shareholder’s countries and the EU. Bankwatch has suggested the development of a climate policy and a temporary ban on investments in coal mining projects in the EBRD mining policy. Like practically every one of our proposals that would instil meaningful, positive change in the EBRD’s mining related activities, this one has not met with much enthusiasm at the bank.