Home > Blog entry > A walk on the wild side

The EBRD-financed Green Boulevard project in Belgrade, Serbia, has long attracted criticism from groups like Streets for Cyclists, who have pointed out that it will include no cycling lanes, and will slow down public transport by letting cars drive on the tram tracks. But now it is under construction, a whole new slew of problems have come up. 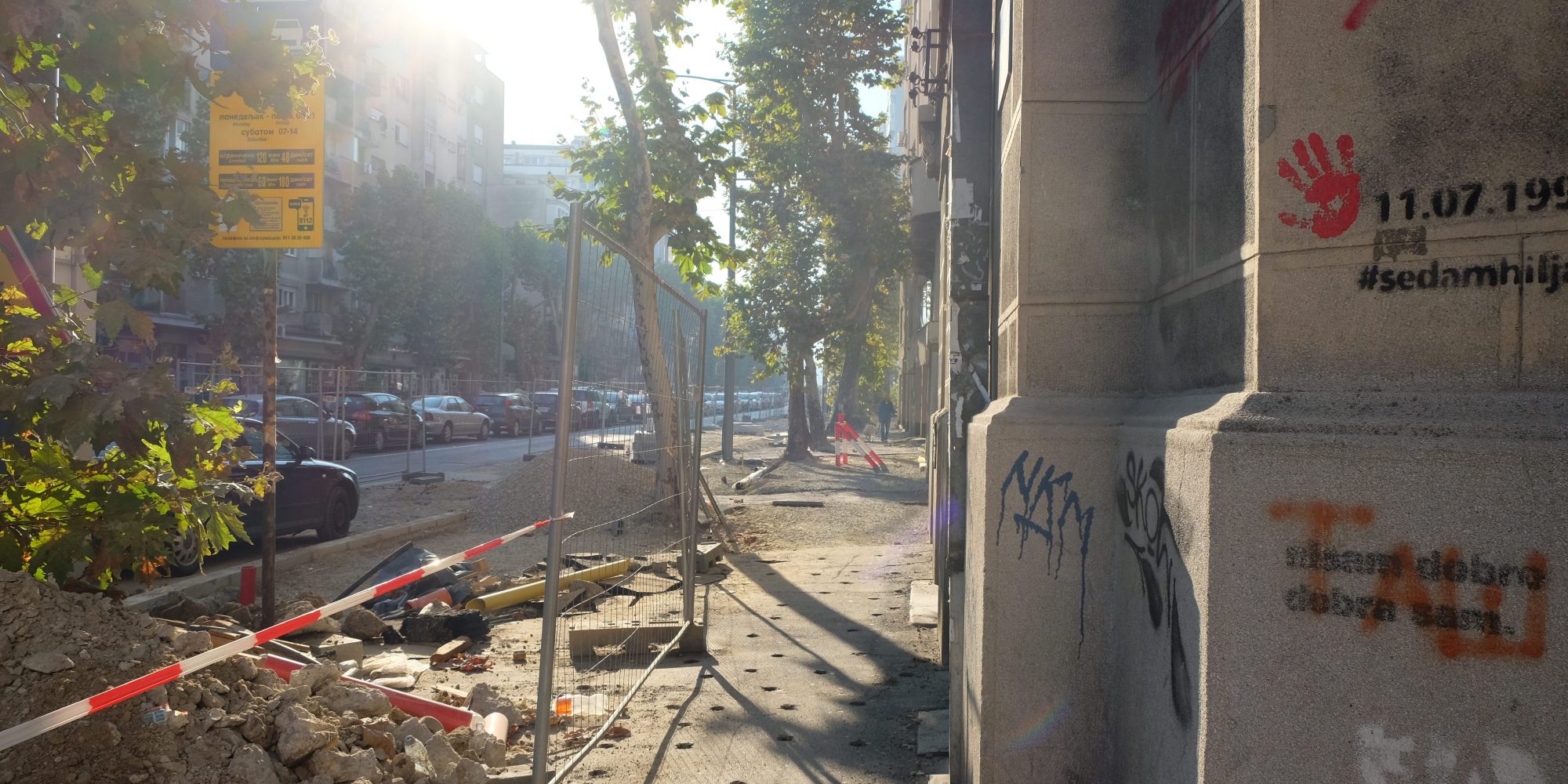 Almost every person I’ve mentioned Belgrade to in the last few months has said the same thing: “they’ve dug up half the roads in the city” and “the public transport has got worse and worse.”

One of the roads being dug up is the so-called Green Boulevard, a 3 km stretch of road comprising the Kraljice Marije, 27. Marta, Dzordza Vasingtona (George Washington) and Cara Dusana streets. The project is taking place under the auspices of the EBRD’s Green Cities Framework, aimed at making urban areas more liveable in the bank’s region of operations.

Now the Green Boulevard project has entered the construction phase and has become notorious among Belgrade residents due to its disruptive impacts, noise, dust pollution and poor construction practices.

This has been particularly noticeable due to the extremely bad air pollution which has plagued Belgrade this autumn.

During a recent visit to Belgrade, we decided to take a look at this famous Green Boulevard to see what everyone is talking about. Sure enough, there was plenty to see.

Starting at the crossroads between George Washington Street and Despot Stefan Boulevard, we immediately encountered a safety hazard. There is no alternative routing for pedestrians set up, so they either have to walk in the road to cross George Washington Street, a busy road in the city centre, or cross the construction site through an open section of fence on the northern side.

Then, heading south, we encountered unfenced or inadequately fenced holes in the road, like the one in the gallery (click on the dots to scroll through).

In George Washington Street between Palmotićeva and Takovska there is hardly any pedestrian access to this section of the street at all, and certainly no disabled access

In some places it is hard even for two pedestrians to squeeze past one another. It looks like the emergency services can’t access this part of the road at all at the moment

Pedestrian walks on the sidewalk near the corner of Kraljica Marija and Karnegijev streets, next to the Faculty of Technology and Metallurgy

In George Washington Street between Palmotićeva and Takovska there is hardly any pedestrian access to this section of the street at all, and certainly no disabled access. Going southwards on George Washington Street, by the junction with Palmotićeva, pedestrians have to cross over the building site to the western side of the road because the eastern pavement is inside the building site and has been dug up. We were lucky to be there on a sunny day, not after rain.

Further southwards, the only remaining pavement – bearing in mind that the other side of the street is off-limits to pedestrians, is narrow and uneven – down to around 60-70 cm in some places. Pushchairs can hardly pass through, and wheelchairs don’t stand a chance.

In some places it is hard even for two pedestrians to squeeze past one another. It looks like the emergency services can’t access this part of the road at all at the moment.

Continuing up the street, where George Washington becomes Kraljica Marija, walking conditions remain perilous on the sidewalk and exposed dust on the ground and in the air increases.

Even though construction on this portion of the street began earlier, during the summer, it was not completed before construction began further down on the street. This has contributed, perhaps unnecessarily, to the traffic.

In addition, the construction site itself is open for pedestrians in some parts of Kraljica Marija. Pedestrians freely walk through the site in this location near the Faculty of Mechanical Engineering – a reasonable action when the nearest pedestrian crossings and only safe way to get to the other side of the street are several blocks away in either direction.

Streets for Cyclists have already attempted to secure improvements in this project through a problem-solving initiative at the EBRD’s Project Complaint Mechanism, which would have entailed mediation with the project promoter to reach agreement on how to proceed. But this was scuppered by the fact that the City of Belgrade didn’t even bother to answer the PCM’s letters.

This kind of negligent attitude is clearly reflected in the way the works have been set up. The EBRD’s Environmental and Social Policy is quite weak on issues connected to the environmental sustainability of transport projects, but it has several provisions on community health and safety, whose application is very hard to spot in this project.

The Green Boulevard is in danger of becoming a reputational headache for the EBRD. As the Bank ramps up its Green Cities programme, such visible urban projects will increase public scrutiny of its activities. It is therefore very much in the EBRD’s interest to take prompt action to improve this project, to put on hold the preparation of the Belgrade GCAP until the City shows preparedness to properly implement projects and to ensure it is able to properly enforce its standards in future projects.