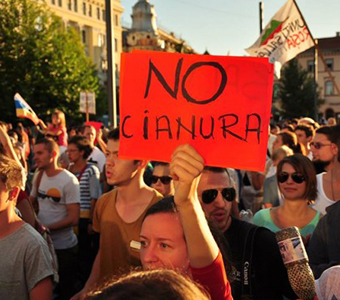 The first open cast gold mine to use cyanide leaching in Romania would be the Certej project in Romania, planned for development by Deva Gold SA, majority-owned by Canada’s Eldorado Gold company.

The project is particularly sensitive given the fact that in 1971 the failure of a mine dam at Certej led to the death of 89 people. Yet it appears that Eldorado Gold has been underplaying the risks of the project and pumping up the benefits. So with this in mind Mining Watch Romania, of which Bankwatch is a founding member, has produced a new report aimed at giving Eldorado’s investors the other side of the story.

Below is their press release from today. The original is online here.

REPORT: No silver lining for the Certej cyanide gold mine

Romania, April 29, 2015 — Mining Watch Romania in association with 22 Romanian and international NGOs is pleased to present Anticipating Surprise-Assessing Risk: An investors’ guide to Eldorado Gold’s Certej mine proposal (TSX:ELD). The report exposes a compendium of risks associated with the Certej gold project and highlights some less evident or known facts that in return are likely to impair ELD’s ability to develop it.

Due to opposition Eldorado’s Certej project has already undergone multiple changes; reflected in the significant increase of initial capital costs. Forecasted capital and production costs and projected revenues as published by ELD are based on over-optimistic and unverified projections in terms of costs and prices. Eldorado’s embellished story of its financial soundness has been called into question by analysts who have recently downgraded Eldorado Gold Corp from Buy to Hold due to ‘costs higher than expected’.

“Eldorado’s Certej project caught the full attention of environmental NGOs in the region. An increasing number of Romanian citizens demand transparency in the permitting process as opposed to the murky previous procedures” says Ionut Apostol from Greenpeace Romania.

The attempts on the part of ELD’s management to circumvene Romanian legal procedures was spotted by watchful citizens’ organisations who alerted the public and national supervisory authorities. Any further attempts to take advantage of servile, unscrupulous local officials is likely to induce additional reputational damage for Eldorado and will likely give rise to additional litigation cases. ELD’s environmental certificate is currently subject to litigation brought forward by civil society organisations active at Rosia Montana (TSX:GBU).

Romania’s most relevant and successful social movement for the past 25 years was triggered by opposition to a gold mining project – Rosia Montana. As has been the case with Rosia Montana, with Certej it is also becoming evident that the less transparent and the more corrupt a proposal is, the more risky it is.

“Eldorado obtained permits whose legality is either being questioned in courts [1] or have already been proven illegal. The profit margin of the Certej operation does not allow Eldorado to engage in media & advocacy campaigns or in legal battles comparable to Gabriel Resources. And even if it did, in light of the situation above it’s best for investors to drop out while losses are relatively small” adds Roxana Pencea of Mining Watch Romania.

According to Stefania Simion, strategic litigation coordinator for the Save Rosia Montana campaign: “Eldorado promotes a low cost mining project in a country that faced two devastating cyanide mining accidents. We will take all necessary measures to make sure no detail is left unchecked and any small irregularity will be signaled to both the public and supervising authorities.”

Eldorado Gold, just like Gabriel Resources more than ten years ago, tends to minimise and interpret the heavy risks of the Certej mine, thus exposing investors to uncertainty and hazard. Certej, just like Rosia Montana, is not a “quality” asset, as management presents it, for technical, financial, social and legal reasons described in the report. Low gold prices make the project’s profit margin very precarious, especially because management has not acknowledged that without the “social licence” there is a very high political risk associated. “Shareholders should be skeptical of a company management that is willing to expose them to such risks without full disclosure and discussion”, comments Jamie Kneen of Mining Watch Canada.

“Romania will not have murky mines with significant social, environmental and economic costs forced upon it to the benefit of corrupt officials and misleading company management. Investors should turn to Rosia Montana to assess what risk and cost this really represents,” says Stephanie Roth, a volunteer with the Save Rosia Montana campaign.