Home > Blog entry > Campaign asks UniCredit to ‘get out of coal’

Pressure is growing not only on international financial institutions but also on private banks to stop financing fossil fuels. 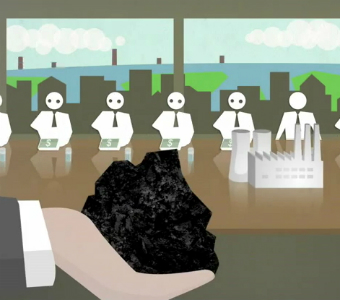 For more than a year now, Bankwatch has been campaigning against financial support from the European Investment Bank and the European Bank for Reconstruction and Development for the climate damaging and also otherwise controversial Sostanj lignite power plant project in Slovenia.

Additionally to public loans, the project also depends on financing from commercial banks to whom both the EIB and the EBRD syndicate parts of their loans for Sostanj:

One of the three banks that appear in both consortia is the Italian UniCredit, which is now being targeted by the European Coal Finance Campaign, in which Bankwatch is involved.

‘UniCredit: get out of coal’ is the slogan under which UniCredit clients and anyone else can sign a petition asking the bank to stop lending to projects like the Sostanj lignite power plant.

It is certainly not only UniCredit that needs to reform its lending, which is exactly why the European Coal Finance Campaign came into being. It exposes the double talk of leading European banks that often advertise a green image, but continue investing in coal with little concern for social and climate justice.

For a humorous approach to the issue see the video below. And when you’ve finished watching, go sign the petition here.