The growing antagonism between promoters of the Khudoni hydropower plant project in Georgia and their local opponents from Kaishi is unlikely to ease when the investor and the Georgian Ministry of Energy boycott mediation by Georgia’s Ombudsman. 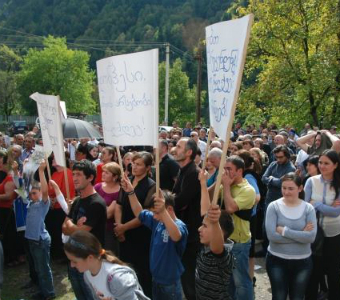 Protests at a consultation meeting in Kaishi in summer 2013.

Today, an extraordinary meeting of the whole Svan community is being held in Khaishi in the Georgian Svaneti mountains. The meeting deals with the Khudoni hydropower plant project which has been stirred up Georgian emotions since summer last year.

The new intensification of the controversy was triggered by land survey works that the Khudoni investor Transelectrica had started in the end of January. Noticing the works, locals blocked the central road in Kaishi with big rocks and built tents for people to guard the village day and night. 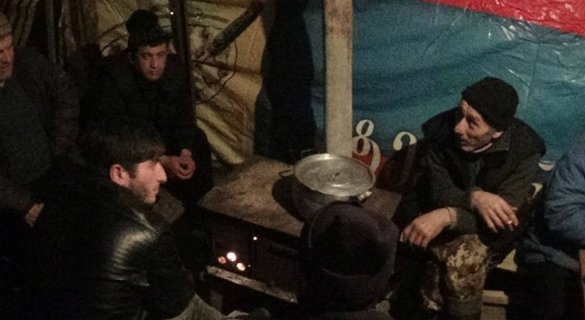 Protesters warming around a small stove in the tent. (More images below.)

The main contention concerns the fact that in 2012 more than 1500 ha land were sold by the Georgian state to Transelectrica for 1 USD. Locals were not informed about the deal that included land traditional owned by the local population but not officially registered. The plight of the Svans from Kaishi has since then found more and more support among the Georgian population.

Earlier this week, Georgia’s Ombudsman Ucha Nanuashvili, who has already voiced his concerns about the project, stated after meeting locals [ka] that (own translation):

“there are serious violations and too many questions to which the investor company Transelectrica has to answer. It is incomprehensible why measurements and registration of the property should happened now even though the property was already transferred to the company.”

Nanuashvili offered to organise and facilitate a dialogue between locals, Transelectrica and the Georgian Ministry of Energy on February 4. Yet neither Transelectrica nor the ministry sent representatives to the meeting. Nanuashvili regretted their refusal, noting that it will further complicate reconciling the increasingly entrenched positions.

Nanuashvili proposed another public meeting of all interested parties (including the ministry and the investor) for February 28 to discuss specifically the human rights dimension of the Khudoni project.

The meeting would be held shortly before the Ombudsman offices publishes its final report on the project in March [ka], according to official information. The report is the result of the Ombudsman’s investigations after the local population of Khaishi officially requested the protection of their rights several months ago. 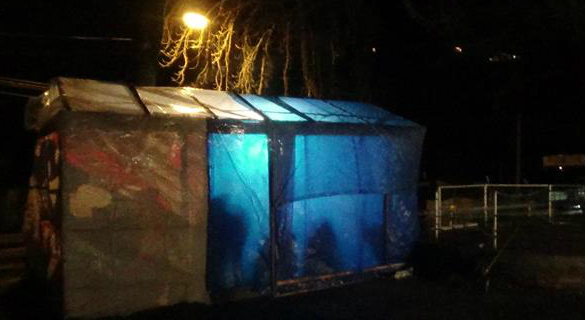 The protest tent in Kaishi. 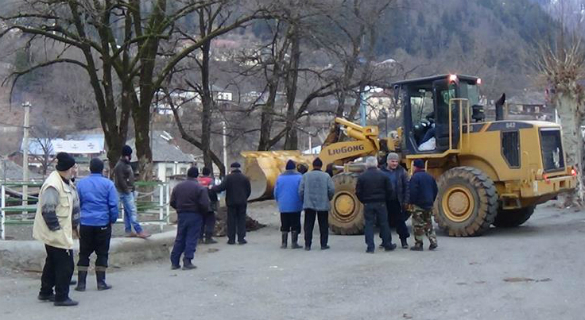 Machinery used for the road block.