On 22 February, more than 70 activists and residents from the Chyhyryn region south of Kyiv protested outside the headquarters of Myronivsky Hliboproduct (MHP), the Ukrainian agribusiness conglomerate owned by one of the country’s richest billionaires. 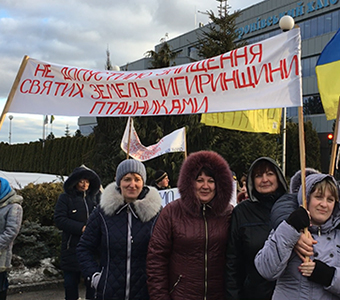 Protesters outside MHP offices in Kyiv

On 22 February, more than 70 activists and residents from the Chyhyryn region south of Kyiv protested outside the headquarters of Myronivsky Hliboproduct (MHP), the Ukrainian agribusiness conglomerate owned by one of the country’s richest billionaires. The protesters were airing their grievances against MHP’s plans to greatly expand its poultry operations in Chyhyryn, which locals believe will have a devastating effect on the small and medium sized farmers and the tourist potential of the area.

The expansion in question involves the construction of nine poultry brigades, which would provide rearing for more than a million chickens at a time. MHP is received financing for its operations from from a number of international financiers, including the European Investment Bank, the International Finance Corporation and the European Bank for Reconstruction and Development.

Nina Martynovska, the deputy village council of Ratseve, a village in Chyhyryn region, joined the protest because she believes that their concerns are falling on deaf ears. “We’ve complained to decision-makers at all levels of the government, including the president of Ukraine, so many times that we’ve lost count.” For her opposition to the project, Martynovska was beaten and hospitalised in June 2016. This is not the first instance of harassment related to resistance against agribusiness developments across the region.

Discussion about the construction of the MHP’ facilities near Chyhyryn began in 2015, with several announcements and advertisements in local newspapers and a visit of company representatives to Ratseve. “We went to other parts of the region to see for ourselves the consequences of such developments: the stench, less water in wells, manure stored in the open and in our fields and woodland, and damage to our roads,” said Myhaylo Pohorishniy, a resident of Ratseve who was also at Wednesday’s march. In spite of the villagers’ ongoing complaints, MHP subsidiary Peremoha Nova published in November 2016 an official statement of intent to construct the rearing facilities within the boundaries of Ratseve.

MHP officials met with the protesters during the action, but the activists know the that fight for the survival of their community will continue.