A promotional video for an upcoming climate protest in Warsaw draws attention to the negative influence that coal has on our health and that coal businesses will have on the global climate negotiations. 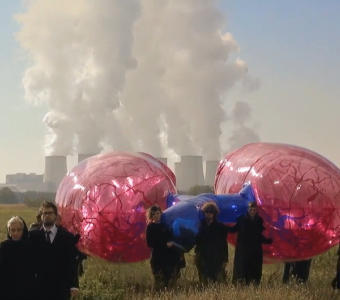 With the COP19/CMP9 around the corner, this year’s host of the event, the Polish government, is coming under close scrutiny by climate campaigners and other stakeholders. This hasn’t stopped the Polish organisers from being quite vocal about its opposition to any ambitious climate action, though.

One of the controversial advances is the International Coal and Climate Summit, organised by the World Coal Association and hosted by the Polish Ministry of Economy in parallel to the COP19. The announcement of the event has met strong criticism for transforming the COP into a lobbying opportunity for dirty coal.

Yet, civil society is intent on making its protests heard, even though it is being held at arm’s length by the Polish COP organisers, who prefer to discuss climate change with businesses that have a vested interest in opposing effective restrictions on CO2 emissions: Cough4Coal, a campaign that focuses on the health impacts of coal, has invited to the ‘People before Coal’ protest against the WCA’s summit on November 18.

Judging from the promotional video this promises to be a noteworthy and entertaining statement against the influence of coal on our health and on global climate legislation.