Last Tuesday activists from Croatia, Italy and Colombia formed a human chain in front of the Plomin coal power plant to highlight that the real price of coal is human lives – at both ends of the chain of production. 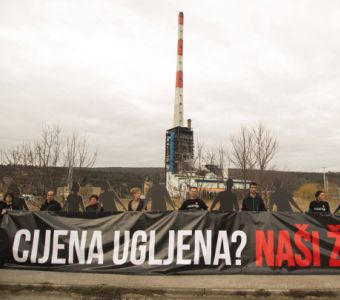 Local residents near Plomin in Croatia’s Istria County have for years been concerned about the health impacts of air pollution from the existing Plomin 1 and 2 power plant units and the planned Plomin C.

However, it is much less known that around a quarter of Croatia’s coal comes from Colombia, where opencast coal mining directly endangers the local communities through resettlement, pollution and overuse of water resources.

For example, thousands of tonnes of coal burned in Plomin over the past 15 years came from the El Cerrejon mine in Colombia’s La Guajira region. At last week’s protest, Danilo Urrea from Colombian group CENSAT-Agua Viva/Friends of the Earth Colombia spoke about the dire consequences of coal extraction in the mine.

Under the guise of development, said Urrea, in less than 30 years the coal companies and industrial agriculture corporations have gained control of the main water resources in La Guajira, which they have polluted and depleted. The mining operations in El Cerrejon alone use 17 million litres of water daily for damping down dust on the roads where the coal trucks drive, while the average inhabitant of La Guajira drinks less than a litre of water daily.

Facing such water shortage, local communities can no longer grow their own food and people in the region have been dying due to lack of food and water.

Considering that the culture of the local communities is based on the region’s previously rich water resources, with traditional agriculture, livestock breeding and fishing, Urrea sees El Cerrejon as responsible for the crisis and the destruction of the local communities’ culture, and the conflict between the residents and the mining companies that has ensued. The countries importing the coal also share responsibility.

Along with Croatia, Italy is one of those countries. But in this case the story may have an inspiring ending. Talking at the event, Antonio Tricario of Re:Common told of the unique case of the Vado Ligure plant, owned by Tirreno Power, which was burning coal from Colombia until March 2014 when a judge ordered the temporary (but most likely to be made permanent) shut down of its two 330 MW coal-fired units.

After local groups filed a case with the public prosecutor, a painstaking investigation was opened against 86 people including the director of the power plant, as well as local officials. The investigation, which was completed recently, proved their responsibility for environmental disaster and manslaughter. Italian parliamentarians, also argued that in the Vado Ligure case, corporate pressure had influenced public officials’ decisions. The beginning of the trial is expected soon.

Mladen Bastijanic, an activistfrom Labin, emphasized that Istria also suffers from water scarcity. High quality water from the Bubic jama spring is used for the Plomin power plant and residents in the nearby town of Labin are supplied with water of much poorer quality from the springs in the Rasa valley, a situation he described as “criminal”.

Dusica Radojcic from Green Istria pointed out that Plomin C would create the need for even greater volumes of imported coal and that coal-based development is simply immoral. The new Croatian government has recently agreed a moratorium on the construction of new coal power plants, but to prove it is serious it must definitively withdraw from Plomin C, she concluded.