More clarity is needed regarding the Energy Union’s priorities for the Czech Republic. 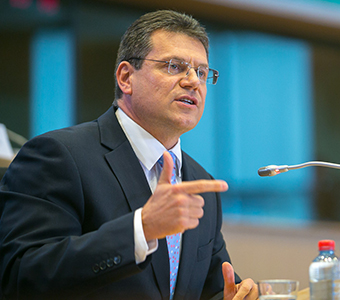 The European Commission has been hard at work devising the EU’s new energy strategy. It is touted as an ambitious new path for a unified, sustainable energy future, and indeed some of its elements like boosting energy efficiency and expanding renewable energy sources could be an important contribution to the global fight against climate change and for cleaner air. Other parts of this emerging plan – primarily, but not only, prioritising additional imports of natural gas – are simply inconsistent with the EU’s overall energy vision and effectively risk undermining a genuine transformation of Europe’s energy sector.

Nowhere is this dissonance more salient than in central and eastern Europe. In fact, much about the architecture and operation of the Energy Union is still to be decided. The Commission’s Vice-President Maroš Šefčovič has toured some EU member states between May and July to promote the Energy Union strategy and explain the domestic relevance of its five pillars for each of the countries. He will continue his tour in September.

In the meantime, in a series of blog posts, Bankwatch campaigners will be weighing in on the implications that the EU’s new energy enterprise, as laid out by Vice-President Šefčovič, could have for each of the countries.

Don’t miss the next posts on Hungary and Latvia.

Much like the Czech national energy policy, the concept of the Energy Union is mostly full of paradoxes. Rather than helping the country move to a modern, clean energy economy that responds to the challenges of climate change, adopts new technologies and adjusts to a new market shape , the Commission’s new initiative first and foremost spells replacing gas imports from Russia with gas imports from similarly problematic Azerbaijan.

Instead of using its central location to help the EU transmission system and benefit from it, the Czech Republic will rather use EU priority funding to boost an imaginary, highly controversial nuclear power plant project.

For the Czech Republic the strategy’s most striking paradox, however, lies with the proposed reforms of energy production and distribution. The Commission hails the interconnection capacity of the world’s fifth major electricity exporter (yes, the Czech Republic). Projects of Common Interest (PCIs) which receive priority treatment and EU funding are proposed to further improve the cross-border flows. Looking at the projects at stake, however, we see that the importance of interconnections, as expressed by the Commission, is rather a path to facilitate the country’s wish list, in the Czech case new nuclear capacity.

PCIs in the Czech Republic include new power lines that would connect already well-connected parts of the country and – as if by coincidence – they add new transmission capacity for nuclear reactors that are planned to be built in some distant future. At the same time, another PCI, a phase shifting transformer at the border with Germany, would basically establish a “border guard” for the Czech transmission system. The installation would prevent German offshore wind electricity to go via Czech territory.

Instead of using its central location to help the EU transmission system and benefit from it, the Czech Republic will rather use EU priority funding to boost an imaginary, highly controversial nuclear power plant project.

In other words, while the Energy Union aims at increasing interconnectivity between the electricity grids of EU countries, the Czech Republic would rather see its borders closed for electricity imports (including renewables), but wide open for nuclear and coal electricity exports.

The outlook for renewables

Renewables are not only taking a backseat in the plans for grid connections. The Commission rightly identifies the country being among the most energy intensive and points to problematic changes in renewables’ support regimes. Because of this lack of support and administrative barriers, investment opportunities in the renewables sector are practically non-existent in the country, especially in the solar and wind sectors. Even the current EU funding to renewable power in the Czech Republic is minimal at less than EUR 54 million for seven years for the entire country.

Considering this, and the fact that one of the ideas underlying the Energy Union is about the EU becoming a world leader on renewable energies, the Commission will need to look closely at what is happening in reality if the Czech Republic is to be part of this effort.

The Commission lists the newly established European Fund for Strategic Investment (EFSI) and research and innovation among the main opportunities and benefits that the Energy Union can offer.
In view of the difficulties in the Czech electricity market, however, the government and the Commission should work closely together to present a credible, functioning mechanism that would allow Czechs to submit renewable projects for funding from the EFSI.

A look at the new EU funding period shows that the case is similarly difficult with energy efficiency. The Czech Operational Programmes (OPs) – the documents that outline funding priorities and will guide EU funded investments for the next seven years – lack a clear focus on energy efficiency with the issue being spread across four OPs. In addition, the financed projects would be more effective if the demanded efficiency standards would go beyond the minimal legal requirements.

It is difficult to imagine that the Czech Republic will treat energy efficiency as a strategic priority even under the Energy Union.

The intention of the Energy Union strategy to coordinate energy policies across countries and sectors will need to have a real impact on the ground. In the case of the Czech Republic, there needs to be clarity where priorities lie. Is it in the success of EU measures meant to bolster energy and money savings, or is it rather new gas import routes? Should cross-border connections for electricity and gas be financed if they actually do not contribute to the connectivity of the country? And just how is the Czech Republic going to benefit from innovations in renewable power with almost non-existing financing schemes or capacities to deploy new technologies?