A Croation winner of Bankwatch’s Better Ideas contest for sustainable EU Funds has just begun implementing their project. The positive responses from their community and the successful start illustrate that “small is beautiful” can also apply to Cohesion Policy. 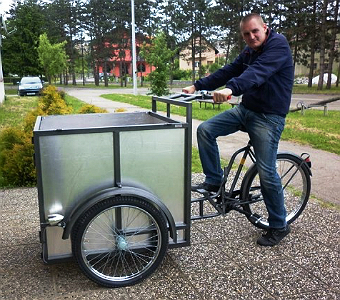 In the beginning of this year, Bankwatch announced the winners of its competition for sustainable EU funded project ideas. Although the competition had ended, just ending our involvement there was out of the question for us, impressed as we were by the project ideas and the people’s dedication to make these become reality. So we accompanied the initiatives and offered our support.

“Small things make difference” was the competition title in Croatia and this is what happened now in the city of Karlovac. What had just been an idea in October 2012 is now being put into practice: On 28 May, the local NGO Eko Pan – one of the three award winners from Croatia – presented its cargo bike which collects used paper from households, residential buildings, offices and companies from the Karlovac city area. The whole project was financed with the 1000 euro prize money from Bankwatch’s competition. [*]

“The whole project design came as result of daily questions from people and businesses about possibilities for a separate paper waste collection. The current recycling spots in the city are not comfortable to use and many people asked for personalising this environmental service. The door to door collection of waste is an ideal way to make that happen. It is convenient for the clients and ensures high paper recovery and the reduction of landfill waste.”

To be sure the project will be used, Eko Pan – with support from a local flat maintenance company – asked citizens about their need for such a service. More than 100 houses and residential flats responded to the call. They received boxes especially designed for paper collection. Two workers, who have been employed with financial support of the Croatian employment service and its “public works programme”, are now every day collecting paper directly from citizens and transfer it to the local paper recycling company. In first two weeks, the two bike operators collected more than 3 tons of waste paper!

The funds gathered from the service will be invested in new cargo bikes, collection boxes and printing of promotional materials.

For the time being, the project is only in its start-up phase and it wouldn’t have gotten there without the financial support from Bankwatch and the public employment programme. But the feedback so far suggests that the project will be environmentally, economically and socially sustainable in the future. It is just one example but illustrates what Bankwatch meant to show with our competition: Local initiatives have the advantage of being close to their constituencies and clients. Their ideas should be taken seriously if decisions on EU funds allocations are to benefit European citizens and communities.

Large infrastructure projects are not the only choice. Also small things can make difference.

* The competition was funded with the help of the EU’s Europe for Citizens Programme and the European Climate Foundation.