The likely allocation of EU funds is set to bring about a breakthrough success for a popular and dearly needed campaign for better air quality in Krakow, Poland. 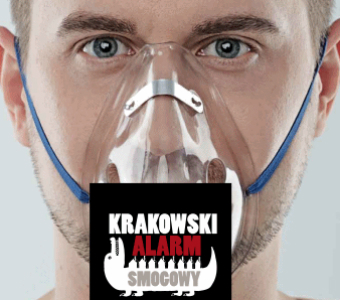 As the now frankly absurd EU budget 2014-2020 stalemate staggers on in Brussels, it’s been heartening to get wind of what some of my former Bankwatch colleagues in Krakow have been achieving as part of the ‘Krakow Smog Alert’ campaign in Poland’s second largest city – and future EU budget money looks set to make a huge positive difference for people living in currently Europe’s third most polluted city.

Last winter, the time of year when the effects of coal burning are most acute (both outdoors and indoors – coal-burning in stoves, furnaces and boilers for heating is still widespread in the city during the winter months), concerned parents in Krakow had had enough of the peak smog’s impacts on their children’s health. By breathing Krakow’s air, the city’s inhabitants inhale the same amount of the highly carcinogenic benzo(a)pyrene as you would from smoking 2500 cigarettes a year (pdf). 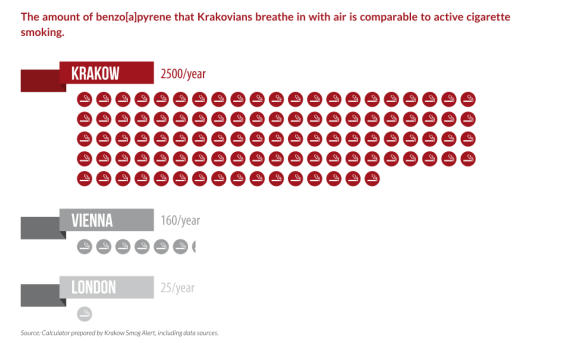 Poor air quality in London continues to attract attention, as well as numerous campaigns. But let’s be clear – air quality in Krakow is 100 times worse!

A Facebook campaign called Krakow Smog Alert was thus launched, and quickly gained city-wide interest and support. Indeed, the overwhelming response in the first few weeks of the campaign created a sense of urgency and political space for local policy makers to seek real solutions for improved air quality in Krakow. The city’s doctors also rallied to the cause.

Air quality regulation experts subsequently visited in order to brainstorm solutions with local and regional officials, including the implementation of energy efficiency programmes.

A breakthrough moment duly arrived just a few weeks ago. On 30 September, the Malopolska regional parliament adopted an ambitious air quality programme, which includes a proposed banning of solid fuels (coal) heating for households in Krakow starting in 2018, and adopting a strategy to phase out coal use in the rest of the region.

The plan – “An almost unthinkable outcome when we started the campaign”, my former colleague Andrzej Gula of the Institute for Environmental Economics, who helped launch and spearhead the initiative, tells me – includes the allocation of EUR 120 million from EU structural funds (for the forthcoming 2014-2020 EU budgetary period), as well as a sixfold increase of the local budget, in order to subsidise the replacement of coal stoves and improve the efficiency of public and residential buildings.

All of this (pdf) has been achieved in spite of the dominance of the coal industry in Poland’s energy sector. Not surprisingly, this pioneering effort, and the stunning progress made against all the odds, has been attracting attention from coal-affected citizens across Poland – from Gdansk in the north to neighbouring Zakopane, a top European mountain resort that also suffers from coal-induced pollution.

According to Andrzej, “If the Krakow Smog Alert campaign can be replicated in other Polish urban communities, then great. We are certainly ready to pass on advice, and hopefully others can benefit from our experience. Affected communities should be aware that, as the acute winter period is fast approaching, we are also entering a very opportune moment as far as future EU spending is concerned. At national and regional level, the authorities will shortly be finalising exactly how Poland spends its EU money for the 2014-2020 period. EU money stands to be a lifesaver – literally – in Krakow, and it should now be targeted at air quality measures, as well as domestic energy savings initiatives, all across Poland.”

As this blog has been in the making alas, the Krakow campaign has encountered something of a reality check. Just last week, to widespread outrage, the head of the Malopolska regional authority came out publicly with suggestions that the adopted air quality programme – including the coal ban in Krakow – is in doubt. This despite a 32 to 1 vote in favour of the programme in September.

Clearly Poland’s powerful coal lobby is – belatedly – catching up with the Krakow Smog Alert’s giant strides forward towards ensuring a healthy environment for the people of Krakow.

Ahead of voting on a legal resolution scheduled for late November, that would formally adopt the air quality programme and coal ban, Krakow’s campaigners will meet with the head of the regional authority today, in an attempt to convince him that there is no mistake: expert advice, 16,000 Krakowians and EU air quality targets (not to mention EU millions) all indicate that a be tter future for the city of Krakow is possible – a future without coal.