The European Investment Bank recently confirmed plans to finance the Trans-Adriatic Pipeline from Greece via Albania to Italy. Yet a coalition of local mayors will do whatever it takes to stop the project. 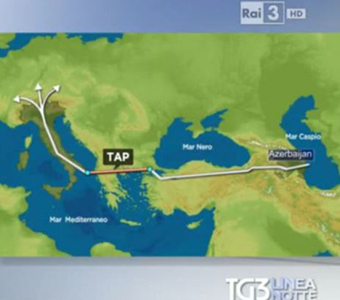 Cross-posted with kind permission from the Counter Balance blog.

The Southern Gas Corridor, a gas pipeline that has to bring gas from Azerbaijan all the way to Italy and which has been prioritized by the European Commission has come under serious pressure because of strong opposition from local communities where the pipeline enters the land.

Marco Potì, mayor of the town Melendugno in Southern Italy explained why the pipeline which he considers “useless and non-strategic” threatens the security of his citizens on Italian national television earlier this week.

He challenged the national government for excluding the local administration from the decision making process and fears the pipeline “will have a devastating impact on our environment, on our landscapes and agricultural land.” But more than that, Potì speaks as a mayor responsible for the safety of his citizens and demands a full assessment of the industrial risk of the plant, as required by the Italian and EU law.

He assured the regions of Lecce and Apulia and a coalition of local mayors will do whatever it takes to stop it: “We are fighting [the project] on all fronts”, Potì said.

In addition to local opposition also the Ministry of Cultural Affairs and Landscape have stepped in denouncing a violation in the procedure of the environmental assessment which the Italian authorities are currently investigating.

The local opposition and the different ongoing procedures against the project suggest that final approval may be delayed significantly and may undermine the timely completion of one of EU’s top priority projects in the framework of its energy security agenda. It raises serious questions about how “priority” projects are identified by the European Commission when the people and local authorities are de facto being excluded from the decision making process.