As the pilot phase of the EU Project Bonds Initiative is coming to an end, a roundtable discussion in the European Parliament takes stock of the initiative. 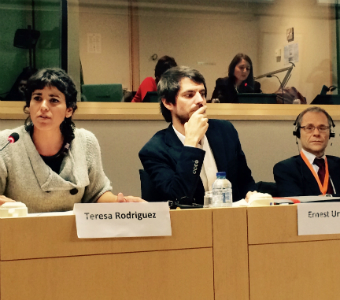 (Cross-posted from the Counter Balance blog.)

The pilot phase of the EU Project Bond Initiative is about to come to an end. Over the last two years nine infrastructure projects have been approved for refinancing through this risk sharing facility developed by the European Commission and the European Investment Bank (EIB). And much more will follow as this financial instrument and similar guarantee mechanisms will be used to leverage the foreseen €315 billion of Juncker’s InvestEU package.

We couldn’t think of a better moment to assess the merits of this mechanism and so, in co-operation with the GUE/NGL and Greens political groups, we brought together MEPs, civil society organisations and the European Commission (the EIB unfortunately did not attend) for a roundtable on the EU Project Bond Initiative in the European Parliament – what lessons can we learn from the pilot phase and what are the implications for the Juncker package?

The Castor project, a gas storage facility in Spain, is the first and probably most notorious project that has been refinanced through EU project bonds. After the first gas injections caused a series of hundreds of earthquakes the project had to be halted but due to a contractual clause it was the Spanish government who had to take the losses. Spanish civil society groups were well represented to speak out against this project which first caused physical and later on financial shocks – with €1,4 billion debt being passed on to Spanish citizens through their gas bills.

Another iconic case which was presented: Passante di Mestre, a controversial motorway in Italy. So far it received an EIB loan but the huge debt that the project generated is being considered to be refinanced with EU project bonds. Rebecca Rovoletto of Opzione Zero, an Italian civil society organisation, explained why this should be avoided. Several companies and government officials involved in the project are entangled in a huge corruption scandal and have been arrested by the Italian authorities. Project bonds would be used to restructure the debt generated by these dodgy structures while the public would take up the guarantee for that.

It appeared that both projects, Castor and Passante di Mestre, revealed many of the structural weaknesses of the project bond mechanism, said representatives of Counter Balance.

First of all the PBI is structured as such that the public entity absorbs most of the risk in order to attract private investments. As a consequence losses are socialized while profits are privatised. Linked to that, the mechanism allows refinancing risky projects that failed to attract investments in any other way, and as a result the risk of failure and thus public debt is much higher.

The PBI favours projects such as Castor and Passante, large infrastructure projects, often with a considerable environmental impact. This mechanism is not suited to finance sustainable, locally supported projects.

The Castor project also showed that transparency remains a huge issue. Despite the well documented impacts of the project, most of the details about the contractual agreement, clauses and absorbed risks remain secret.

Finally there is also a corruption risk involved. In the case of Passante di Mestre hundreds of arrests of politicians and business men directly or indirectly linked to the motorway have been made on suspicions of corruption and links to organized crime. In this context, the president of the Italian anti-corruption authority has called project bonds a tool for money laundering as long as no public register for bondholders is in place and their identity remains unknown.

Giorgio, Chiarion-Casoni, one of the architects of the project bonds at the European Commission, stressed the need not to confuse the projects themselves with the financial mechanism mechanism. “I would also be angry [for the Castor project] if I were a Spanish citizen. This could be avoided with proper due diligence. The mechanism is not to blame”, he said.

He did acknowledge however that in the project bonds mechanism the risks are completely shifted to the public. This will have serious consequences for the Juncker investment plan which will make use of similar risk-sharing mechanisms to leverage private investments amounting to €315 billion. The same risks than with the project bonds are likely to exist, but multiplied on a much larger scale.

To avoid new disasters civil society and the European Parliament need to take action. In this context, this public event can be seen as a first step to challenge the set-up of new risk-sharing mechanisms at EU level following the announcement of the InvestEU package, starting with the project bonds.

Counter Balance called for a moratorium on the Project Bond Initiative to take place, in order to re-assess its financial, social and environmental impact on EU citizens. Civil society also urged the Commission to ensure that a full-scale evaluation of the initiative materializes in 2015, in connection with an open and inclusive public consultation enabling not only market actors but also public authorities and civil society to voice their concerns about the roll-out of the initiative. Finally, NGOs called for more democratic oversight over project bonds through greater involvement of the European Parliament and possibly the European Court of Auditors.