A roundtable discussion on European public banks and energy lending brought together Members of the European Parliament and non-governmental organisations, while the public banks themselves chose to stay away. 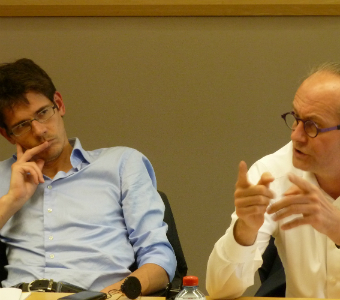 Cross-posted and slightly edited version from the Counter Balance blog.

“It’s your energy” goes the slogan of Electrabel, Belgian’s primary energy company. But of course that’s not true. If it was my energy, most of it would not be generated in the first place and what I used would not come from nuclear power plants, coal or other kinds of fossil fuels. Ownership over energy implies having a say in how it is generated – given the different impacts of different energy sources – and as well managing the eventual profits.

It is one thing for such misleading claims to be included in advertisements, but it is entirely another when you realise publicly-owned banks like the European Investment Bank and the European Bank for Reconstruction and Development – which finance a great deal of our energy infrastructure – spend public money to finance outdated forms of energy generation like coal and other fossil fuels.

Now is the time for the banks to change course as both are currently reviewing their energy policies. Since most of these processes happen inside the banks behind closed doors, Bankwatch and Counter Balance decided to broaden the debate by holding a public event earlier this week in the European Parliament. Hosted by Parliamentarian Sabine Wils with the attendance of other MEPs and civil society organizations, the event was particularly noticeable for those not in attendance, namely the the EIB and EBRD. In spite of advanced invitations to attend, the banks apparently deem earlier consultations as sufficient forms of public debate.

But the implications of the banks’ energy finance needs urgent attention given warnings about limiting global temperatures to two degrees. This means greenhouse gas emissions should come down in Europe by 95 percent by 2050, with two thirds of proven fossil fuels to remain in the ground, and massive investments are needed in energy savings and the generation of renewable and sustainable energy sources – quite a tall order given the current policies in place at the bank.

Two European public banks are currently reviewing their energy lending policies. We call for an end to coal subsidies.

From across Europe, the case against coal

Against this backdrop MEP Claude Turmes warned during the event, “Any new coal fired power plant is a disaster, especially if financed with public money.” Investment in fossil fuel related infrastructure will increase the weight of fossil fuels in our energy mix for at least another 40 years.

While the EIB and EBRD have increased investments in renewables and energy efficiency in recent years, their continued investments in fossil fuel projects undermines their claims as leaders in the fight against climate change. For instance EIB president Werner Hoyer said that the Sostanj lignite power plant, in spite of swallowing all of Slovenia’s carbon budget until 2050, “is not a bad project.” Also the head of energy at the EBRD Ricardo Puliti has labelled disinvestment from carbon intensive projects as “ideological”.

To highlight the schizophrenia of the banks’ energy lending, the event brought together testimonies from across Europe of the damaging coal-fired power plants the banks financed or intend to finance. Lidija Zivcic from Slovenian NGO Focus pointed to the harmful environmental and social impacts of the Sostanj plant, which is being supported by both the EIB and EBRD and currently facing corruption investigations by Slovenian officials and the EU’s anti-fraud office

Further south in Greece, Michalis Prodromou of WWF Greece discussed the Ptolemaida lignite plant (pdf), which the EIB is considering for financing in spite of the project’s disastrous impacts on human health and the environment. While it is often argued, particularly in a climate of austerity in Greece, that the project will create jobs, Prodromou debunked this myth, highlighting that the project would create only a limited number of jobs compared to the photovoltaic sector which already employs 20 000 people in Greece at the moment.

Finally Arberesha Loxha from the Kosovo Civil Society Consortium for Sustainable Development (KOSID) in Pristina explained the problems with the 600 MW lignite Kosova e Re project. In a country 95 percent dependent on coal for its energy mix and in spite of local opposition to the project, public financing from the World Bank, the US and likely the EBRD is unacceptable. MEP Ulrike Lunacek, who was at the event and has visited Kosovo many times, is concerned about the environmental and social consequences of the project. She highlighted the political interests pushing this project forward. “Looking at sustainable alternatives in line with EU long term climate objectives is the best way forward,”, she said.

The event in Parliament also showed that coal is not the only problematic energy sector in which the banks are investing. Olexi Pasyuk from the National Ecological Centre of Ukraine presented the case of an EBRD loan for so-called safety upgrades of nuclear power plants in Ukraine. Although the EBRD denies its loan is related to the extension of the plants’ operations, twelve units that are supposed to be closed before 2020 will most likely operate for another 20 years. NECU is asking that the banks put an end to supporting any extension programmes (both lifetime and capacity).

The responsibility of the Commission

Investments in coal by the EIB and EBRD also contradict the mandate given to the banks by the European Commission, who is a shareholder in both. In reply to a written parliamentary question from Bas Eickhout, another MEP present at the event, the Commission called on the new EIB energy policy to

“reflect the EU energy policy priorities which have been identified inter alia in the Europe 2020 Strategy, the Energy Infrastructure Package, the Energy 2050 Roadmap – in particular the “no regrets” solutions (infrastructure, efficiency as well as renewables, phasing out of harmful fossil fuels subsidies) – and the recently adopted Green Paper on a framework 2030 for climate and energy policies”.

Referencing the EU’s long-term climate objectives and the need to phase out fossil fuel subsidies is a step in the right direction for the Commission in asserting its interests at the bank and those of the European public it executes for.

Time to face the future

The event provided substantial inputs for the banks to consider in revising their energy policies. How much of it will be taken into account is uncertain, but the purpose of this roundtable to invite democratic debate in the Parliament and engage MEPs on the issue is an important first step.

As the new energy policies are being drafted in this moment, much can still be done.