People from the Kolubara mine basin in Serbia have many stories to tell about the hardships they face due to the lignite mining operations. Serbian Bankwatcher Nikola Perusic adds his account to two stories in the guardian and in Bankwatch Mail 56. 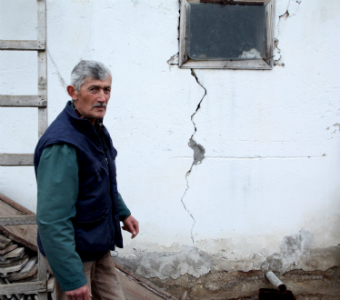 Last month a team of international journalists, invited by Bankwatch and Serbian member group CEKOR, visited the Kolubara mining basin. We met with local inhabitants of Radljevo at the perimeter of the Tamnava West field.

Inhabitants explained their situation, told us how they suffered from the mining operations and how they were waiting for years for a fair compensation that would allow them to resettle. But a fair compensation was never offered. Some families moved (without payment) when things became unbearable. Others did not relocate. Now they face lack of drinking water, air pollution and vibrations day in day out that crack their houses’ walls. They live just 200 meters from the field that was expanded also thanks to a 50 million euro loan from the EBRD in 2003. Many issues remain unresolved, but the EBRD so far has pushed all responsibility away.

You can read an account from one of the journalists at the guardian’s global development website and Bankwatch’s media officer published her own impressions in Issue 56 of the Bankwatch Mail quarterly. (You can sign up for email delivery here).

Yet as sad as these accounts are, they can only give but a glance of how the situation of families in Kolubara really is.

Consider this, after our departure Vitomir Simić, the man portrayed in the guardian article, sent me several documents that prove that their house was foreseen for expropriation already in 1984 when the Tamnava West mine was merely in preparation to be established. When almost 20 years later Vitomir and his family had to leave their uninhabitable house with cracked walls, the mining company did not re-compensate them and since then hasn’t shown any signs to do so.

Or the case of Milan Simić: His family lost more than 2700 apple and pear trees, 13 hazelnut trees, 560 plum trees, 24 cherry trees and more. There is now a 50 meter deep mining pit, where once their farmland was. They asked for 10 000 euros compensation for their trees. Yet, during our visit, Milan, whose son still lives in the house with his wife and son, showed us a court decision that says he is not entitled to compensation, because the family allegedly grew the trees and fruits merely to increase their land’s value and hence the expropriation sum.

The ruling shows how powerful and pervasive the interests of the project promoter EPS, Serbia’s state electricity company, are in Kolubara. All of the mentioned trees were planted in fall 2003 and spring 2004 when the expropriation plan for the Tamnava West field expansion was not defined. It took another two years that the family learned, in 2006, that their land was to be expropriated.

These are all very old cases. These people wait for fair treatment longer than the EBRD even exists. Still the bank has not learned from them and trusts that resettlement issues related to the mine have been resolved sufficiently. The EBRD should finally open its eyes and ears wide to learn about the impacts of coal mining in Kolubara and in extension, of its own loans that continue flowing to EPS and Kolubara.