Home > Blog entry > From the Caucasus to Russia: Why this road?

To “better connect the Caucasus to Russia,” a new road project, Kvesheti-Kobi, is planned to be realized in Georgia. This road section will be part of a north-south corridor that passes the Caucasus and serves to connect the region to Russia.

This article was first published on Bankwatch, official publication of NGO forum on ADB.

Starting in Armenia, the southestern-most of the Caucasus countries, the corridor crosses Georgia and continues to Russia.

This new massive construction will go through a precious valley of Georgia and it poses considerable threats to the livelihoods, biodiversity and cultural heritage of the pristine valley of Khada. It raises questions about the economic and political validity of the initiative. The Asian Development Bank is among the project’s supporters.

The ADB is the largest funder. Of the total USD 558.6 million-project, more than half, USD 415 million, comes from the ADB to the Georgian government. The government invests USD 83.6 million, and the European Bank for Reconstruction and Development (EBRD) has approved a loan of USD 60 million to co-finance construction of a nine kilometer tunnel.

Although its impact was almost unstudied and the promoters had failed to properly inform and communicate with the locals, international banks still allocated funds for this road.

The public protest against Kvesheti-Kobi intensifies and local communities are no longer alone in this fight.

According to the Roads Department of Georgia, the 23-kilometer Kvesheti-Kobi highway aims at better connecting Georgia and the South Caucasus to Russia and its neighbors with shorter and more convenient roads. An official statement from the Roads Department of Georgia, “the tunnel [of the road] provides for safer and reliable conditions during the winter for those using the road.” Promoters also argue that the road will cut distance. Compared to the existing section that connects the same geographic areas, the new one will be only 12 kilometres shorter. Also, the north-south corridor’s traffic time will be reduced by only 40 minutes.

Benefits of this road are debatable. No cost-benefit analysis has been done, both in terms of land transport development as well as its impact on the country’s fiscal parameters.

The current project does not promise a clear economic return, as the budget is unprecedentedly high for a 23-kilometer road that threatens to bulldoze the unique valley.

What will be lost?

The Khada Valley is rare because it brings together an untouched landscape and a large number of cultural monuments in one place. The valley boasts unexplored archaeological treasures that confirm traces of life from the Eneolithic period, rare biodiversity species on the UN red list, and villages built at 1800 meters above sea leve, where old traditions of mountainous people are reserved.

All of this will be replaced by five tunnels and six bridges. One of the tunnels will be nine kilometres long: a rare length in construction, as mentioned by the Road department of Georgia. The bridges total two kilometres and include 426 metre and 166 metre arches.

The project owners suggest that one of the results will be a tourist centre in the valley. It is unknown if the visitors center will promote tourism in the gorge once the bridges and tunnels are in place and thus will have lost its value and identity.

In addition, part of the new road will be constructed by “23rd China Railway Bureau Group”. This company was banned from participating in tenders for nine months by the World Bank for fraud in June 2019.  The company was announced as the winner after the World Bank’s ban. 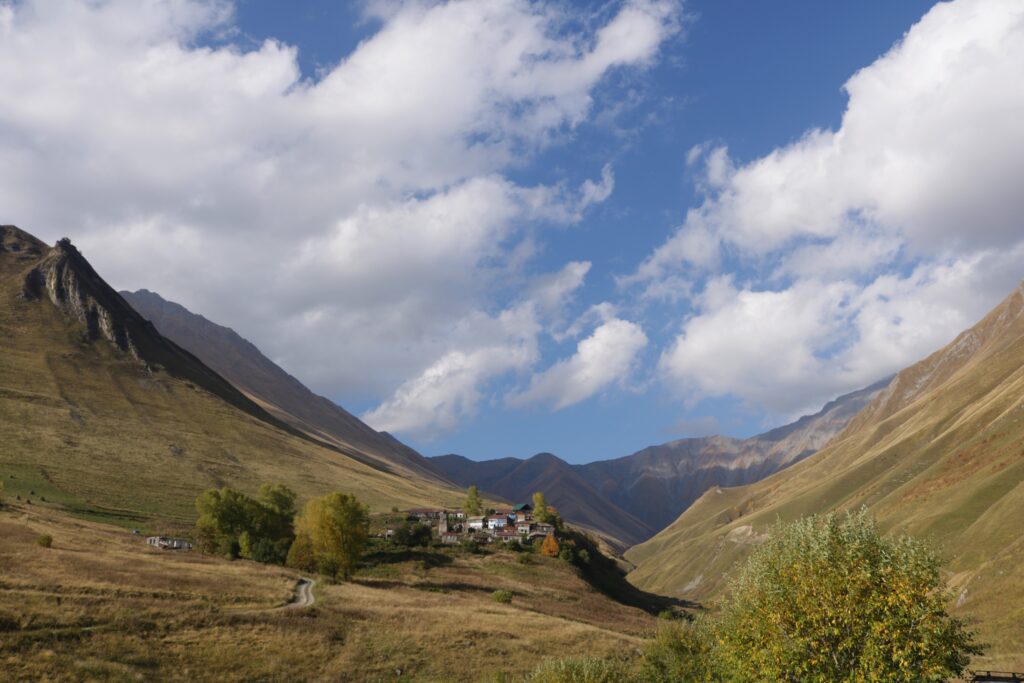 The Kvesheti-Kobi road threats livelihoods. Locals of Khada are asking for the highway to avoid the valley. They have collected signatures, held protests and submitted letters to the ADB and EBRD, asking for help. In August 2019, a few days after Khadians had sent a letter to the ADB, the bank announced the loan approval.

Khadians said they will not give their lands for anything. They do not want to lose their ancestral  areas and are concerned that noise and air pollution will increase. The impact threatens healthy village crops and tourism opportunities.  Expected forced economic resettlement poses risks to incomes. And last but not least, the project is dangerous: geologists warn that the tunnel could pass areas with risk for volcanic activity.

In the struggle to protect the areas, some of the locals have said they have been refused by state agencies to register their traditional properties around the road area. Meanwhile, the project does not include a socio-economic baseline assessment on how it affects the population in terms of land acquisition or restrictions on land use. It does not identify social impacts, needs and rights of affected communities. 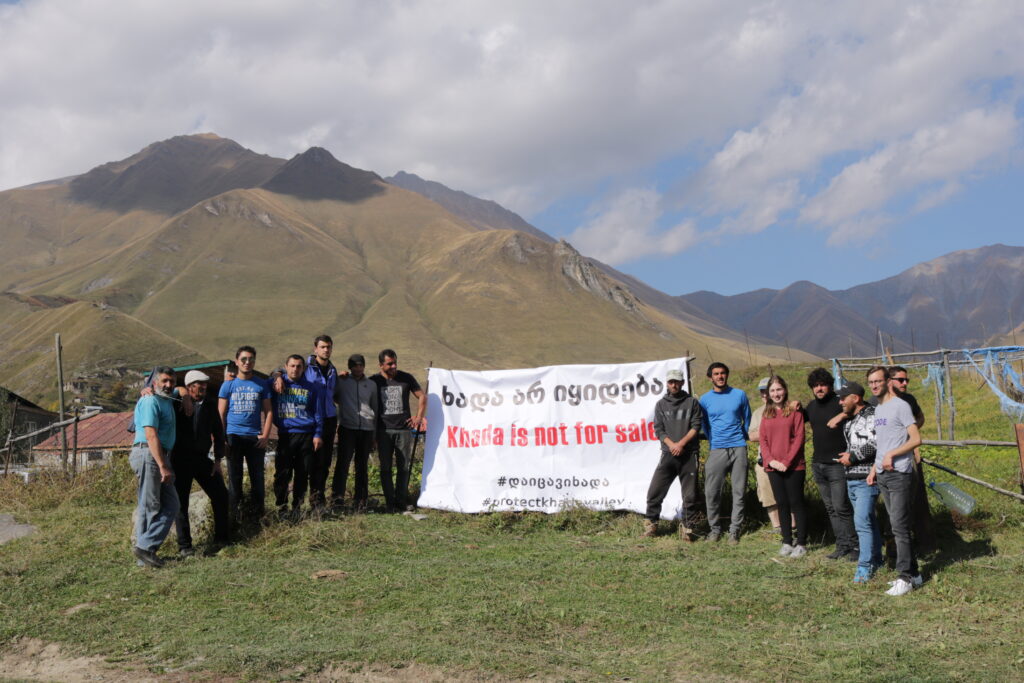 What happens to the 60 towers?

The Khada valley is also known as ‘the place of 60 towers’ that include special historic methods of construction and are unique in Georgia.

Churches, fortresses, towers, old cemeteries and other memorials are only a portion of the monuments in the Khada Valley.

The road project documentation suggests it will pass the cultural sites at 50 to 100 meters, which means they are very likely to be ruined. Even in the Environmental Impact Assessment drawn up by the government, it is stated that “it will have a significant effect” on the monuments. Sufficient mitigation measures are absent in the project documentation.

Experts and archeologists worry that the large scale construction will bring irreconcilable damage to the monuments, especially in light of the fact that the government began the project without detailed research.

Khada Valley is a biodiversity hotspot in the Greater Caucasus. As the greenfield project crosses the Kazbegi national park and a number of Emerald sites, gthe Kvesheti-Kobi road will heavily impact its landscape and biodiversity.

As pollution increases and habitats change, the project will influence the reduction of species listed in the Red Book and will encourage the spread of invasive species in the valley. The road will affect bird watching areas that offer one of the unique possibilities for bird lovers in Georgia. The area is a host to more than 30 000 migratory species per year.

Kazbegi Park is the home for at least six species found on Georgia’s red list. Most of those species were not even mentioned in the project documentation and environmental risk management plan for them is not present.

Then, why this road?

While locals and NGOs fight to protect human rights, save the valley and question the economic validity of the project, journalists have also raised questions about Kvesheti-Kobi: national security risks. Security experts note that larger, resistant to military transport roads directly cut to Russia – a country with which Georgia has ongoing military disputes.

The Kvesheti-Kobi road inspires a lot of questions, and they are not only political. When the project does not prove its economic benefits, causes human right violations, promises dangers, cooperates with a company that was banned for fraud and does not present an in-depth social-environmental studies and analysis, why do the international banks go against their own policies and support it.