Scientists, civil activists and the local community unite and call on Europeans to join the petition to save the exceptional biodiversity and precious cultural heritage in Khada. 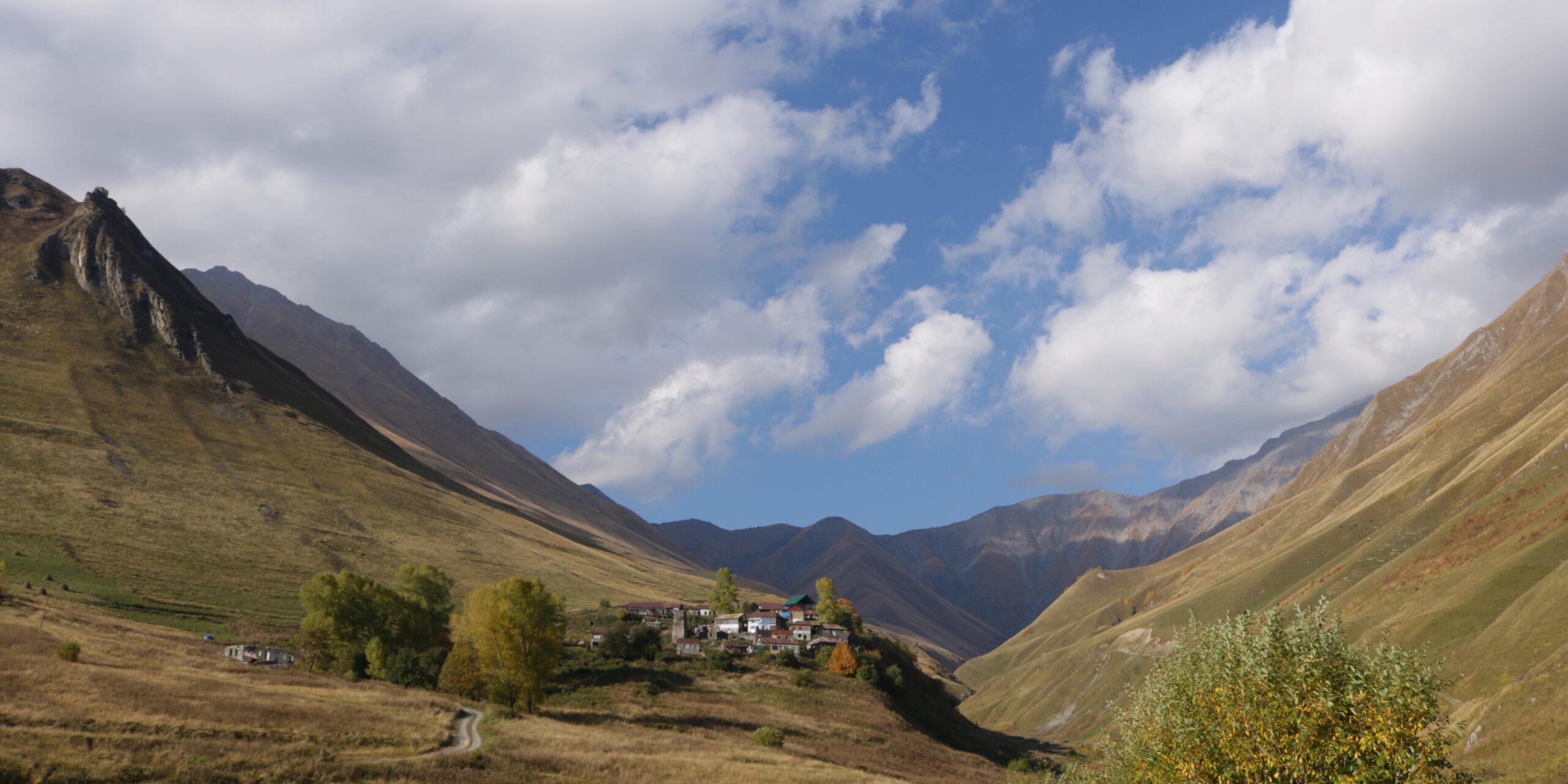 ‘This is not only the struggle of the locals. If we lose the Khada Valley, the entire country will lose it. So we hope that everyone will bond to save the historic heritage and wealthy biodiversity of Khada,’ said Giga Chokheli, a local of Georgia’s Khada Valley. Khada is known among Georgians and foreigners for many reasons: it is among tourists’ favorite hiking destinations, with breathtaking mountainous landscapes, and its precious cultural legacy is unique.

This valley will be bulldozed to build the Kvesheti Kobi road to Russia. An EUR 558 million project envisages digging five tunnels and building six bridges in a tiny valley. Two international financial institutions, the European Bank for Reconstruction and Development (EBRD) and the Asian Development Bank (ADB), have already allocated loans to support this initiative.

But some members of the local community, scientists and human rights activists refuse to let the road be built. Campaigners said that they are particularly concerned because the project has violated some of the international banks’ standards.

They have started a petition to protect the valley, as the project threatens traditional forms of livelihood, unique biodiversity (some species in the valley are on the IUCN Red List of Threatened Species), a number of cultural monuments and unique towers that date back to the tenth and eleventh centuries, unexplored archaeological treasures that confirm traces of life from the Eneolithic period, and tourism opportunities.

The petition addresses the Government of Georgia, the EBRD and the ADB. It calls on the project promoters to choose an alternative route for the new road that does not go  through Khada because of the valley’s special value. Campaigners also request that the government establish a Protected Landscape (IUCN category V) in the Khada Valley (see all requests here).

‘Khada Valley has an amazing…diversity of cultural heritage monuments in a small area. This clearly confirms how unique the valley is and, to be fully discovered, it needs thorough scientific explorations. Some of the patterns here are unique, including the three monuments of national importance that date back to the IX-X centuries… All together, they form a cultural phenomenon that embraces considerable scientific, educational and touristic potential and its importance goes beyond local. We consider it inadmissible to have the highway in the valley. An alternative route should be selected,’ said Manana Suramelashvili, an art and cultural heritage expert who is one of the authors of the petition.

‘The project’s ESIA [Environmental and Social Impact Assessment] Report and other mandatory documentation related to the project do not comply with the EBRD’s 2014 Environmental and Social Policy and the ADB’s 2009 Safeguard Policy,’ reads a new report about the potential socio-economic and gender impact of the Kvesheti-Kobi road on the local population, produced by Green Alternative, a Bankwatch member organisation in Georgia.

According to the report, the project does not comply with the EBRD’s standards for the following performance requirements: assessment and management of environmental and social impacts and issues, land acquisition, involuntary resettlement and economic displacement, cultural heritage, and information disclosure and stakeholder engagement.

‘The project will go through a critical habitat, as defined by the ADB’s policy.It will endanger physical cultural resources as well as fail to bring poverty alleviation and benefits to the region’s inhabitants,’ states Green Alternative’s assessment.

The petition was launched after recent controversial developments in the valley. Despite one year of struggle, the locals’ protests and highly critical reactions from cultural, environmental and human rights defenders about the project’s impact, the preliminary construction still began.

The very first steps of those works already threatened a historic monument and violated Georgian law: the preliminary construction took place only 70 metres from a significant historic monument in Mtiuleti, the Nagvarevi church. According to Georgian law, construction must take place at least 300 metres away from any significant historical or cultural site.

In addition to this, archaeologists said, the construction of a secondary road for the Kvesheti-Kobi project posed serious risks to archeologically important yet unstudied spots in the village of Zakatkari. Only after the public outrage in response to these activities did the National Agency for Cultural Heritage Preservation in Georgia say that the activities were illegal. None of the project’s international funders have made any public comment about the violations.

‘The Naghvarevi and Zakatkari cases are the first examples of the kinds of dangers this project could bring,’ said Manana Kochladze, founder of Green Alternative. ‘The development of the Kvesheti-Kobi project began without properly exploring the area. The social and environmental impacts of the road project are practically unstudied, and the construction is more dangerous than stated in official project documents. Unfortunately, in Georgia, the participation of international financial institutions in a project does not necessarily guarantee that the project will be developed according to international standards.’

‘For one year we used all official methods to save the valley. As a result, instead of listening to our concerns, the government kicked off the construction,’ said Giga Chokheli from Khada, who is one of the complainants who filed a lawsuit alongside Green Alternative against the Georgian government. The lawsuit requests that the government revoke the permission for the preliminary construction of the Kvesheti-Kobi road project obtained by the Ministry of Environmental Protection and Agriculture. Other attempts to save Khada also included letters to the ADB and EBRD, who the local population particularly relied on due to their international standards. However, their expectations were not quite fulfilled:

‘Instead of the support of international financial institutions, the response I got at one of the meetings from a representative of the Asian Development Bank was the following: “Do you really believe that project is being done for Khada?!”’ Chokheli recalled. He added:

‘The project ignores the needs of villagers and intends to sacrifice the entire Khada Valley, which we will not allow.’