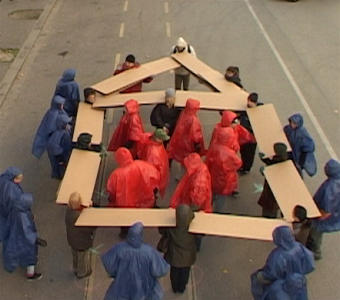 Outside the Ministry of Economy in Budapest, MTVSZ and Bankwatch, represented by the network’s Executive director Mark Fodor, expressed the importance of more public investments via the EU funds in environmental protection and energy efficiency, as both an insulated house and a non-insulated house were erected – a fast construction process indeed (see the YouTube clip from the action below), but one that aimed to promote the delivery of long-lasting benefits for Hungarians and our environment.

As with other central and eastern European governments, the Hungarian government’s planning documents for EU spending in the 2014-2020 period do give prominence – in principle at least – to the need for a transition to a low carbon economy and environmental protection, in line with EU priorities.

However, in the Hungarian spending plans, as elsewhere in our region, the aspirations on paper are not being matched by real ambition in the actual spending figures across the so-called EU ‘operational programmes’.

Draft documentation seen by MTVSZ, under Hungary’s ‘Environmental Protection and Energy Efficiency Operational Programme’ (KEHOP), suggests that less than 15 percent of the total EU funding available, approximately EUR 3.7 billion out of total EUR 24.3 billion EU development money for Hungary) is set to be mobilised – a figure that is nowhere near enough to meet the set objectives.

The groups underlined in a petition – handed over at the action to a Ministry of Development representative, and sent in parallel to other relevant ministries – that the current EU spending proposals simply do not go far enough for the government to fulfil pledges made in recent years to introduce affordable energy efficiency measures in Hungarian homes, nor to implement the necessary environmental measures that are indispensable for the protection of natural resources and human health.

As a result of its close monitoring of the ongoing Hungarian EU programming process, MTVSZ believes that at least an extra EUR 0.3-1.7 billion should be added to KEHOP for energy efficiency and environmental protection in order to meet these challenges and governmental priorities.

And these funds could be shifted, for example, from currently over-generous draft EU allocations for Hungary’s road infrastructure, the kind of investment money that could instead, we believe, be covered by road tolls.

Grasping the EU funds potential to ramp up energy efficiency in Hungarian homes is something the Orbán government cannot afford to pass up – the benefits are clear for the public both in terms of reduced bills and the increase in jobs that will come as the work is carried out. Hungary’s energy security and independence, equally, will be enhanced.

We set up our stall – and our houses – outside the Ministry of Economy, and it is now time for the necessary planning permission, in the shape of EU budget adjustments, to be granted.