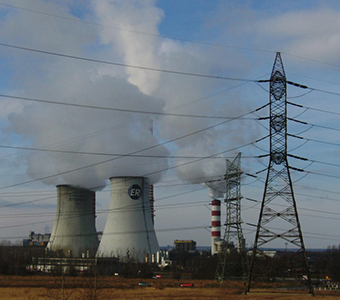 On Monday Polish NGOs Client Earth, Workshop for all Beings, Greenpeace, WWF and local community group Eco-Kociewie petitioned the General Director of Environmental Protection to cancel the environmental impact assessment permit for the Polnoc Power Plant in northern Poland. At a whopping 2 gigawatts, the Polnoc plant poses a number of threats to people’s health and the environment, with planned carbon dioxide emissions from burning coal exceeding 10 million tonnes annually.

The groups’ request outlines how the regional minister for environment acted against national legislation at the behest of the project investor in setting limits on waste discharge at the plant. An October 2002 Ministry of Environment regulation states that waste discharges from such plants cannot raise water temperatures above 21.5 degrees Celsius. Yet under pressure from project sponsor Kulczyk Investments, the Regional Director of Environment Protection raised the upper limit to 26.5 degrees, jeopardising in particular migratory fish populations.

Experts warn that species in the Vistula river – including Atlantic salmon and sturgeon, sea trout and river lamprey ¬– will suffer altered migration patterns and increased mortality rates. These species react to temperature changes much lower than even half a degree, so such an increase in water temperatures would be fatal.

The groups’ complaint is yet another strike against the controversial project and its investors, which have been plagued by missteps since project preparations began in 2011.

Readers of this blog may recall that last month Kulczyk Investments, owned by Poland’s richest man, is also driving forward controversial plans to drill oil and frack shale gas in Tunisia, with the financial blessing of the European Bank for Reconstruction and Development.

In February Kulczyk Investments suffered another setback to its plans at Polnoc when Polish NGOs won a huge legal challenge with a court overturning the project’s constructions permit.

Kulczyk Investments boasted about potential financing from the EBRD and the European Investment Bank during initial project preparations in 2011 in order to lure investors to the costly EUR 3 billion-plus project and to provide political cover for the risky investment.

But both IFIs dodged a bullet in avoiding the project, announcing in mid-2011 that they would not finance Polnoc or any other coal power plant in Poland. This decision was reiterated with the EIB’s recently adopted criteria for fossil fuel lending. The criteria make it clear that projects like Polnoc power plant would not qualify for funding from the EU’s house bank funding (and all eyes are now the EBRD to see whether it will follow the EIB away from coal investments).

Today’s petition from the groups adds to the mounting evidence against the project and should be a further warning to commercial banks sizing up the project. Coupled with the move of some institutional investors away from coal, that Polish courts are cancelling one permit after another for Polnoc is foreboding of things to come.