Monday morning in Warsaw, climate activists staged a public action in front of the Polish Ministry of Economy – the venue for the greenwashing Coal and Climate Summit – to voice their outrage and reiterate a simple reality: there is no such thing as clean coal. 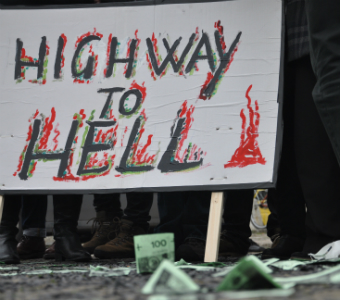 This blog post first appeared on 350.org and was re-posted here with kind permission by the author.

The Polish government, a long-standing opponent of renewable energy and action on climate change, has teamed-up with the World Coal Association (WCA), representing the most polluting corporations in the world, to host the International Coal and Climate Summit taking place on the sidelines of the UN climate talks currently underway in Warsaw.

The conference is a desparate attempt by the coal industry to greenwash their industry–but thanks to the teamwork of activists from across Eastern Europe and around the world, coal is still a dirty word. Our movement’s demand is clear: an immediate phase out of all coal technologies and a shift of investments towards energy technologies that respect peoples’ health, the climate and environment. Dirty fuel sources like coal have no place in a 21st century clean energy economy; this reality can no longer be ignored.

The government and the WCA described the event in vague terms as giving the coal industry “a rare chance” to “be a key part of the climate debate”, a supposed contribution” to the UN climate talks. But the actual agenda of the coal conference is far less deceiving: promoting public subsidies to the dirty coal industry – and thus augment the $544 billion spent on subsidies to the fossil fuel industry in 2012 alone. This summit makes a mockery of the UN climate treaty and of everyone working to combat climate change.

But the summit also highlights how out of touch with reality the Polish government is as a growing anti-coal movement is quickly gaining momentum globally.

Just this year, for example:

Here in Poland, 89% of citizens are in favor of increasing renewable energy production in Poland, according to a recent Greenpeace poll. As many as 73% want the Polish government to be active in preventing dangerous climate change while coal and lignite based energy received minimal support. You can see the full results of the poll here.

Greenpeace put their research into action this morning, dropping a banner off the venue for the coal summit:

All around the world, the climate justice movement is standing up to King Coal. From the fossil fuel divestment campaign to widespread coal protests in places like India and the Philippines, we’re succeeding in beating back the coal industry. The industry is starting to falter in the face of this pressure–and the stark reality that coal has no place in a carbon constrained world.