Journalist and researcher Ryskeldi Satke reports on Centerra Gold’s annual general meeting where mining activists presented shareholders with information on human rights violations and the negative environmental and social impacts of the Kumtor Gold mine. 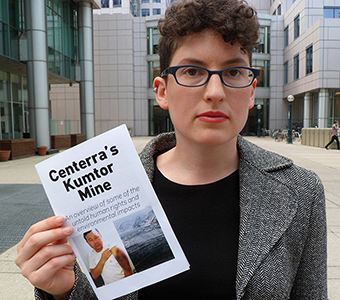 Centerra Gold’s Annual General Meeting (AGM) would have been just like any other conventions that the Canadian miner has had over the last twenty years but not this year, apparently.

Centerra is managing and operating the Kumtor project, one of the biggest gold mines in Central Asia. Since its launch in the 1990s this mining project has been dogged by allegations of corruption and bribery involving Kyrgyz state officials. Centerra has also been accused of violating a number of domestic environmental laws and the regional water accord.

“Rachel spoke about studies pointing to excessive water contamination and explained to shareholders that those trying to expose the mine were being tortured. She warned that Centerra’s Kumtor mine could go the way of Pascua Lama, which is a similar mine build beside precious glaciers that was recently shut down mid-construction due to environmental violations. She offered shareholders a pamphlet based on information she had received about the mine, and so many shareholders wanted this information that she ran out of pamphlets! She was told that she was the first ever shareholder to even ask a question at one of Centerra’s AGM.”

One of the major concerns which was raised by MISN member at the AGM was related to the shocking human rights violations linked to the impact of the Kumtor mine operations on local communities near the project. In its pamphlet (pdf) distributed among Centerra shareholders, MISN highlighted reports of torture which have occurred in October 2013 after community activists staged a protest against the Centerra Gold managed project; specifically, MISN underlined a report which indicates that:

“The Kyrgyz government has largely ignored local grievances, prompting affected communities to stage acts of civil disobedience and encouraging widespread enmity towards Centerra Gold. In one episode, environmental activists from the village of Saruu quietly travelled to the guarded gold mine in July 2013 and documented the destruction of the Davidov glacier. Sweeping arrests followed during and after the protest in October 2013. Scores of community activists have been arrested and tortured by Kyrgyz law enforcement agencies. Despite the strides Kyrgyzstan has made on basic freedoms in Central Asia over the last two decades, the UN Human Rights Committee remains “concerned about widespread practice of torture and ill-treatment, in particular for the purpose of extracting confessions.” The Committee Against Torture meanwhile highlighted “the failure of Kyrgyzstan to investigate fully the many allegations of torture and ill-treatment.””.


Villagers from Saruu filmed how Kumtor trucks are operating at the Davidov glacier in July 2013.

Indeed, the UN Human Rights Council Working Group’s report on Kyrgyz Republic in January 2015 has pointed out that “the use of torture and ill treatment was systematic, aiming at obtaining confessions or extorting money from victims … since the universal periodic review of 2010 complaints of torture increased” (Summary of stakeholders information).

54 more local activists have been forced to flee the country due to arrest warrants by the Kyrgyz authorities in the cases related to anti-Centerra protests. In two particular occasions which took place in February 2014, two dozen policemen raided homes of the wanted activists in the village of Saruu while inflicting physical injuries on elderly women in front of their grandchildren. The police raid in these houses resulted in broken windows and destroyed property. According to the victims, the Kyrgyz police never explained the legal grounds for its violent search. Such actions from the Kyrgyz government have only fuelled frustration and the negative view of Centerra Gold mining operations.

Rachel Small has also raised the question of Centerra Gold’s misconduct over transparency issues linked to the Kumtor mining effect on surrounding ecosystem. MISN referred to the fact that:

“Centerra Gold has consistently dismissed as untrue that operations at Kumtor have had negative implications for the glaciers. Nonetheless, local and international environmentalists have been ringing alarm bells over the glaciers’ melting ice sheet at Kumtor, as well as over Centerra’s withholding information related to the effects of mining operations on the Davydov and Lysyi glaciers.”

In one occasion, Centerra Gold’s contractor has even claimed in response to CEE Bankwatch and hydro-geologist Dr. Robert Moran’s findings that “climate change is a major cause of melting and retreat of glaciers around Kumtor,” citing relevant studies from the World Bank and other international organizations.

However, William Colgan, Ph.D., a researcher at the Geological Survey of Denmark and Greenland (GEUS) concluded that:

“[C]limate change is undoubtedly the main factor driving glacier retreat across the Tien Shan range, the Lysyi and Davydov glaciers are special cases because they are impacted by the Kumtor mine. These glaciers are not retreating due to accelerated surface melt alone, but also by increased ice removal at their termini. In the case of the land-terminating Lysyi and Davydov glaciers, this ice removal is a consequence of mining activities, as the ice overburden must be removed to access ore located beneath the glaciers. The perimeter of the Kumtor mine open ice pit appears to have been excavated up glacier at greater than 30 meters per year between 1998 and 2013. Over the same period, nearby land-terminating glaciers appear to have retreated at closer to 10 meters per year. Local mining activities are clearly a larger factor in the recent wastage of the Lysyi and Davydov glaciers than regional climate change.”

A Bankwatch video from 2012 takes an investigative look at the Kumtor gold mine in Kyrgyzstan.

Additionally, communities near the Kumtor mine are now facing a prospect of the toxic dam spill similar to Canada’s Mount Polley spill disaster which resulted in release of 24 million cubic meters of toxic tailing substances and waste water into the local river system in August 2014. The subject of concern over a spill scenario at the Kumtor mine’s tailing pond has also been raised (pdf) in the US Congress last year when Amanda E. Wooden, Ph.D. (Associate Professor of Environmental Politics & Policy, Bucknell University) has stated in her testimony that:

“The Kumtor tailing pond is situated between Lake Petrov and the Kumtor River, a tributary of the Naryn River. The unlined tailing pit holds more than 34 million m3 of waste water and tailings from the cyanide leachate and other chemicals used to process gold at Kumtor and relies on underlying permafrost for continuous, permanent, impermeable containment. Therefore, changes in the permafrost underneath this extensive tailing pit at the headwaters to the Naryn river and breach threats to Lake Petrov above the tailing pond are concerns that should be monitored.”

Evidently, Centerra Gold executives weren’t expecting uncomfortable questions to be raised at their AGM but Centerra’s Stephen Lang has invited Rachel Small to discuss the concerns after the meeting.
You can see footage from the AGM made by MISN members at https://www.dropbox.com/s/px9g1owd81wb6jk/SAM_2261.AVI?dl=0

Ryskeldi Satke is a contributing writer with research institutions and news organisations in Central Asia, Turkey and the U.S.

Contact him via email at rsatke (at) gmail (dot) com.