A report being presented today analyses the process with which 7000 are to be resettled for the Kosovo lignite mine and concludes that the World Bank-financed process does not comply with the bank’s own standards and is plagued by a slew of other weaknesses. 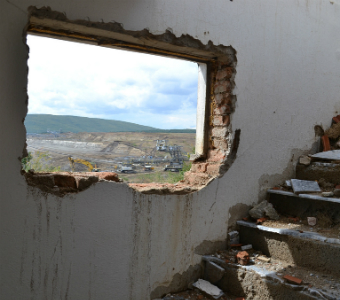 Arguments against the World Bank-financed Kosovo Power Project (KPP) often highlight the costs and negative impacts of building the 600 MW Kosovo C coal-fired power plant while investments in energy efficiency would be more feasible as Kosovo still wastes a large amount of the electricity being produced. What may be less known internationally is that also resettlement is a problematic issue connected to the project.

The Government of Kosovo is currently preparing to involuntarily displace over 7000 people to make way for an open pit lignite mine as part of the Kosovo Power Project. [1] A report [2] commissioned by the Kosovo Civil Society Consortium for Sustainable Development (KOSID) and authored by Dr. Ted Downing, president of the International Network on Displacement and Resettlement (INDR) shows that the government’s preparations do not comply with international involuntary resettlement standards, including those of the OECD and the World Bank itself that are a precondition for the project to obtain international financing.

After millions of dollars in technical assistance, this analysis shows the proposed resettlement policy framework is little more than a weakly disguised cash compensation plan that closely follows the failed patterns of the former government-owned mining company.

Multiple mistakes were and continue to be made, most importantly related to the requirement to prepare a full resettlement plan required by the World Bank’s Operational Policy on Involuntary Resettlement (OP 4.12). Such a resettlement plan can only in very limited situations be substituted with an abbreviated, resettlement policy framework. Yet this is precisely what has been prepared for the Kosovo Power Project.

In the report (pdf), KOSID points out that such a shortcut of a policy framework is not applicable and a resettlement plan for the entire displacement must be prepared.

After millions of dollars in technical assistance, this analysis shows the proposed resettlement policy framework is little more than a weakly disguised cash compensation plan that closely follows the failed patterns of the former government-owned mining company.

In sum, the World Bank management and the Kosovo government are responsible for constructing an unreliable safeguard framework that will cause delays and added costs to the KPP project. Their poor decisions have increased, rather than decreased the financial, environmental, social and health risks for Kosovars, their government, investors and, foremost, those threatened with forced displacement.

2. The report was presented today during a roundtable on resettlement organised by KOSID, unfortunately without the participation of World Bank representatives.

Visar Azemi: World Bank did not have time to join the meeting @WorldBank @visarazemi @KOSIDInfo #resettlement