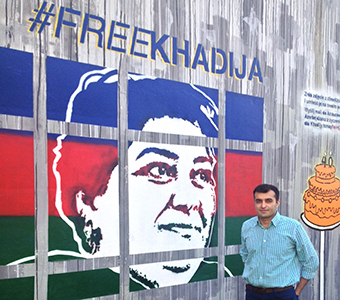 In one of 40 events across Europe, a graffiti has been inaugurated in Warsaw today, to celebrate the 40th birthday of Azeri journalist Khadija Ismayilova on May 27, who has been incarcerated for more than 500 days after a politically motivated trial in her home country. The actions across Europe are meant to highlight the dire situation of human rights in Azerbaijan and to criticise the European Union’s cosy relationship with the country’s dictatorship.

Khadija became famous by exposing corruption among the Azerbaijani ruling elite and human rights violations in Azerbaijan. Most recently her work was confirmed in the Panama Papers, a leak of confidential papers incriminating dozens of political figures, including Azerbaijan’s ruling family.

The birthday graffiti in Warsaw invites people to take a selfie with Khadija and send it to the Azeri embassy. (See a map of where the graffiti is located >>)

After being arrested under ridiculous charges, Khadija was sentenced in September 2015 to 7.5 years in prison. She has received numerous awards, including the Barbara Goldsmith Freedom to Write Award by PEN, Anna Politkovskaya Award and the UNESCO’s prestigious Guillermo Cano Press Freedom Prize in May this year.

Cosying with a dictatorship

In a bid to import gas from Azerbaijan to Europe, EU leaders and finance institutions are warming up to the Aliyev regime. 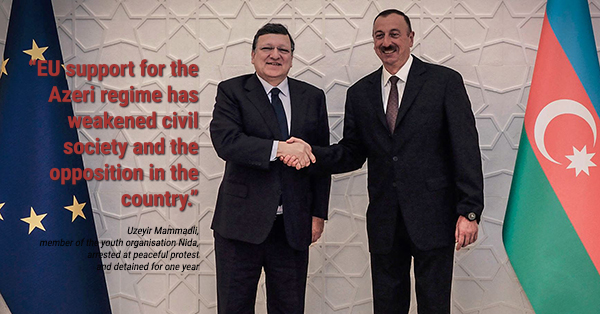 But the story of Khadija is not an isolated case. Azerbaijan is the worst regime in Europe. Since the Aliyev family took over power in 1993 no free and transparent elections have taken place and independent media have experienced enormous pressure. More than 80 political prisoners are held in the country. Reporters Without Borders rank Azerbaijan 163 out of 180 countries in their press freedom index.

Azerbaijan’s regime heavily relies on money obtained from oil and gas exports to consolidate its power, while trying to hide the truth about human rights violations and corruption in Azerbaijan. For exposing this, Khadija Ismaylova was imprisoned.

In a bid to import Azeri gas to Europe, leading EU politicians overlook the relationship between the dictatorship’s power and hydrocarbon exports. The Southern Gas Corridor, a series of mega-pipelines meant to bring gas from the Caspian region to Europe, is being promoted by all means, even though a study has shown (pdf) that, considering the EU’s own data on gas demand, the gas is not even needed.

But the outlook for Azeri gas hasn’t put the conscience of ordinary Europeans to sleep who celebrate Khadija’s birthday today with the message: “We will not turn a blind eye to human rights abuses in Azerbaijan, the worst European dictatorship. Happy birthday Khadija – bütün yaxşı Khadija!”

You can send your own message of support by using the hashtag #FreeKhadija or sending an email to the Azeri embassy in your country (find a list of them here). 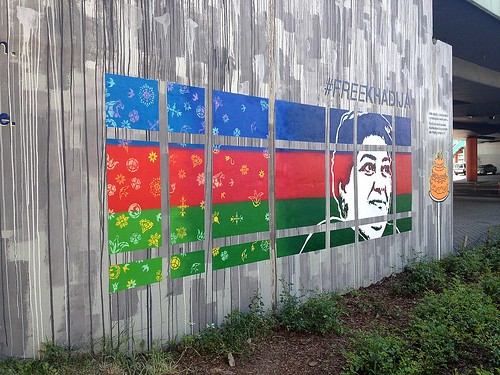