A fact-finding mission to Macedonia has confirmed our concerns that two planned hydro power plants are set to destroy important natural habitats in the Mavrovo National Park. 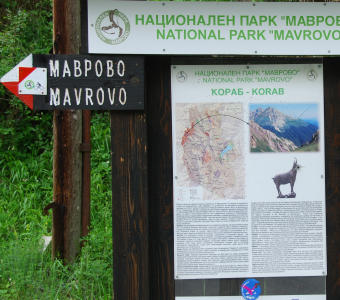 Last week I visited the Mavrovo National Park in Macedonia where both the European Bank for Reconstruction and Development and the World Bank are developing hydro power plants. With me was hydrobiology expert Dr. David Pithart of the Daphne Institute of Applied Ecology (CZ).

Worryingly, we found out that the national park authorities are proposing changes of the protected areas in the park that would more easily accommodate hydro power plant development. (This might be an unusual decision for a national park, but it’s no surprise considering the park lacks environmental specialists – most of the 80 staff that need to cover of more then 700 km2 are foresters and administration.)

So what would the construction of those hydro power plants mean for the national park?

The EBRD and Boskov Most

One of the projects in question is the EBRD supported Boskov Most, planned to be constructed in an area that is not only due to become a Natura 2000 site when Macedonia joins the EU, but that is also home to the critically endangered Balkan Lynx (Lynx Lynx Balcanicus). (See also an earlier blog post.) Out of an estimated total world population of one hundred cats, all living in the Balkan mountains, 30-50 live in the Mavrovo National Park.

The project’s impact on those animals has been largely ignored (pdf) in the Environmental Impact Assessment (EIA) for Boskov Most, including the fact that the bio-monitoring of the NGO Macedonian Ecological Society has resulted in lynx individuals being captured on camera right above the Boskov site.

While the EIA has not yet been approved by the Macedonian government, the project sponsor ELEM decided – after criticism by Macedonian nature protection groups – to organise its own bio-monitoring of the Boskov Most area. However, by now, intensive construction works are flooding the area with noise, scaring away many animals and certainly the shy lynx population. (A small hydro power plant (also funded by the EBRD) is being constructed just a few hundred meters away from the Boskov Most site.)

The chance that any lynx would be spotted this year in the area are conveniently low, which would offer ELEM the necessary excuse for going ahead with Boskov Most. But just in case it hasn’t registered yet: Lynx have been spotted in the area already! 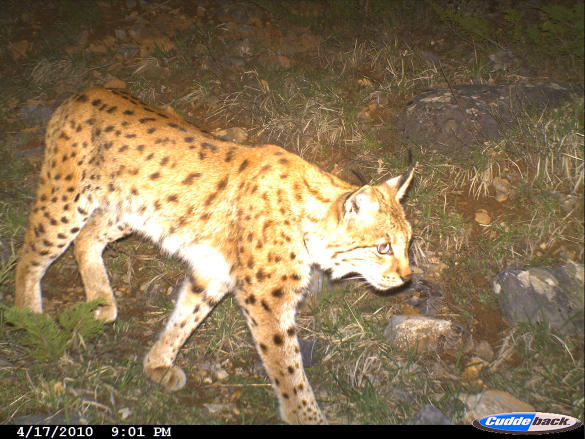 A Balkan Lynx which was captured by previous monitoring by the Macedonian Ecological Society in the Boskov Most area.

All this hasn’t stopped the EBRD from approving a loan for the project. Therefore in November last year Macedonian Bankwatch member group Eko-svest filed a complaint that has been deemed eligible by the EBRD’s complaint mechanism and will now be examined in detail.

While the Boskov Most project has been approved (pending the complaint review), that isn’t yet the case for the other project we visited, the Lukovo Pole Water Regulation and Renewable Energy Project for which a World Bank loan is scheduled for approval in autumn 2012.

According to the World Bank’s own documentation, “The project area lies in a sub-alpine landscape of considerable natural beauty with diverse fauna and flora and a relatively unspoiled landscape.”

Apart from driving bulldozers into that unspoiled landscape, the project involves a number of problematic aspects:

extensive hydrological engineering in this high-altitude valley, including construction of a large dam and a 20km long diversion channel to transfer water from the Mt. Korab watershed to the reservoir;

As the Macedonian energy utility ENEL has pointed out: The terrain’s geological conditions make it “most often not appropriate for construction” due to danger of “landslides, unsteady sides, leaking of materials, permanent presence of waters”. Substantial adjustments (read: interferences with the unspoiled nature) are therefore necessary, such as excavations down to the rock foundations (approximately 4m deep), surface and underground drainage and more. [1]

During the massive construction of of canal and service roads, we can again expect substantial disturbance that would push out the Lynx population – at a time when other areas that are suitable for the Balkan Lynx also suffer similar disturbances.

The constructions will be an additional pressure on an area that includes one of the last virgin forests in the park and mountainous streams that will loose most of their water.

Loss of water – a problem for both projects

The loss of water is a problem for both hydro power plants and a particularly serious one: Some of the already existing dams in the park do not allow for the biological minimum of water in the streams. The park’s flora and fauna is already now basically being left to dry by the park management.

This will only be aggravated if Boskov Most and Lukovo Pole will be built, since the proposed levels for the minimum discharge are so low that they would most likely result in practically dry river beds and loss of habitats for freshwater life.

We hope that the World Bank environmental specialists will have more courage than their EBRD colleagues to reject a project that so clearly damages critical natural habitats.

P.S.: Ironically, when we asked for permission to visit the Lukovo Pole location it was not only denied but the authorities deemed it necessary that their several staff members monitor our presence. We do believe that some of the areas should remain strictly protected zones, but that should apply to bulldozers as well as to environmentalist.