Home > Blog entry > Is Egypt just stuck in transition or heading away from democracy? Considerations for the EBRD

Six months after the Egyptian army deposed Egypt’s first freely elected president, the weak democratic signals by the authorities are overshadowed by widespread repression. How can the European Bank for Reconstruction and Development possibly help under these circumstances? Or put differently: Will the limited benefits to the country’s private sector from EBRD engagement really be enough to outweigh the harm done by the bank’s support for an undemocratic regime? 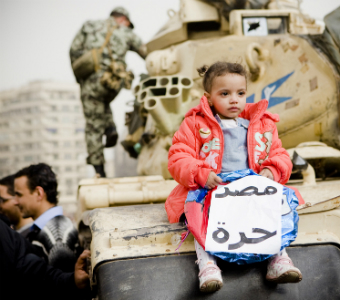 Just before a constitutional referendum next week the situation in Egypt continues to be far from promising. A new analysis by the European Council on Foreign Relations assesses the prospects for the coming months and draws depressing conclusions:

“Egypt is not moving towards meaningful democracy or stability. Instead, the country remains under the control of an army leadership that has overseen a harsh crackdown on the Muslim Brotherhood and now appears to be trying to exclude them permanently from the country’s political life.

“A new controversial constitution has been drafted and will be put to a referendum next week. Parliamentary and presidential elections are scheduled to follow later this year – but the repression of alternative voices will not result in a political solution that can overcome the country’s deep political and societal divisions.

“While there are uncertainties about the path that Egypt will follow it is clear that the country’s powerful security forces will have decisive influence over the future of Egypt. Against a background of popular intolerance and public media that strongly back the state, there is little prospect of the clampdown being lifted in the short term.”

(More details on the desperate human and civil rights situation in Egypt can be found in earlier blog posts from December, November and June last year.)

Advancing Egypt’s status at the EBRD?

This is the background for the EBRD’s decision (planned for the second half of 2014) whether or not to make Egypt a full country of operations. To prove that this decision is more than a formality the EBRD should come up with concrete, clear and publicly available criteria that define the conditions under which Egypt will and especially those under which it will not be given that status.

Unfortunately, statements from the EBRD so far rather suggest that the EBRD will not probe Egypt’s political situation too thoroughly. In response to a Bankwatch enquiry (pdf) following human rights violations in December, the EBRD affirmed its support for democracy in Egypt in principle. At the same time, the bank shies away from drawing concrete consequences should democracy fail:

„When we have significant concerns about conformity with these principles [of multiparty democracy and pluralism], we say so in our public political assessments as well as in private dialogue with the authorities in our countries of operations. However, it has always been the EBRD’s shareholders view that the Bank has to remain engaged, even in the most difficult environments to the extent it can to foster market-oriented transition. We believe that promoting the development of a dynamic private sector is the best way to enhance the sustainability of the transition process, which we recognise proceeds at different paces in different countries“. (Source: EBRD (pdf))

So the EBRD promises to voice its concerns, but it will go at great lengths to continue its lending, based on a flimsy hope that it could foster transition. The problem is that over the past six months, Egypt has moved away from democratic transition. Yet, in the middle of persistent human rights violations the EBRD did not even postpone the vote on its last loan in Egypt.

Under the current circumstances, continued lending in Egypt and advancing Egypt’s status to a full country of operations, violates Article 1 of the EBRD’s mandate.

Moving away from democracy or just ‘stuck in transition’?

Interestingly, the EBRD’s own Transition Report 2013 (pdf) – with the very telling title „Stuck in Transition?“ – draws a very different conclusion about the prospects for reform in Egypt:

“Economic policy-making and the undertaking of politically sensitive reforms have been undermined by domestic turmoil, lack of political consensus and the high turnover of governments.” (Source: EBRD)

And more generally, the study underlines the strong connection between political stability and functioning democratic institutions on the one hand and the success of economic reforms on the other hand (page 4, emphasis added):

“The evidence suggests that countries can promote and accelerate the return of reform, particularly if international integration, domestic leadership and broader social movements work hand in hand.”

„Progress in transition has been closely correlated with political systems: countries which are more democratic have come further, in terms of reform, than their less democratic counterparts.”

„[D]emocratisation is less likely in the context of high inequality“.

Lending to private companies developing their new gas and oil fields will not help bridging the gap between rich and poor in Egypt, limit the polarisation of the Egyptian society or improve the democratic functioning of Egypt’s political system. Privatisation in a despotic country that is plagued by corruption and cronyism will not further the democratic reform, and neither will it support a sustainable economic transition.

Under the current circumstances, continued lending in Egypt (especially to environmentally and social controversial projects) and advancing Egypt’s status to a full country of operations, violates Article 1 of the EBRD’s mandate (page 4 (pdf), emphasis added):

„In contributing to economic progress and reconstruction, the purpose of the Bank shall be to foster the transition towards open market-oriented economies and to promote private and entrepreneurial initiative in […] countries committed to and applying the principles of multiparty democracy, pluralism and market economics.“

The commitment to democratic principles is a precondition for EBRD activities in a given country. The onus is on the EBRD to prove the democratic commitment of Egypt’s authorities. Until then and as long as the current outlook of a security state prevails, a continuation of the EBRD’s business-as-usual would be counter-productive.