Evgenia Chirikova, the leading figure of the Movement to Defend Khimki Forest has yesterday received the US Woman of Courage Award to honour her relentless efforts to save the Khimki Forest near Moscow from being transformed into a motorway. 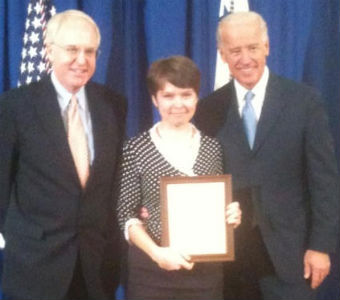 Evgenia Chirikova, the leading figure of the Movement to Defend Khimki Forest has yesterday received the US Woman of Courage Award to honour her relentless efforts to save the Khimki Forest near Moscow from being transformed into a motorway.

No, this didn’t come as a big surprise for us at Bankwatch. US Vice President Joseph Biden handed Evgenia the award when meeting with Russian civil society as part of his visit to Moscow.

Probably no one who has closely followed Evgenia’s fight would hesitate to credit her with extra-ordinary bravery. She has been arrested and threatened by authorities. Colleagues from the Khimki movement have been severely beaten. Even children have been detained after protests against the motorway.

The growing international recognition that Chirikova and the Movement to Defend Khimki Forest receive puts even more pressure on European public banks not to get involved in the tangle of Russian toll road constructions. Russian NGOs have already urged President Barroso to make sure this doesn’t happen.

The European Bank for Reconstruction and Development (EBRD) for one withdrew from financing the motorway section through the Khimki Forest, but apparently is still ready to finance other sections of the same motorway. A move like this would be a slap in the face of Chirikova who is not giving up her struggle easily.

But for now, congratulations, Evgenia! And congratulations to all the other Khimki Forest defenders who have been indirectly honoured through this award.

More information on the Khimki Forest and the motorway section slated to pass through it are available on our website.

Image: A picture from the award ceremony (taken from http://www.ecmo.ru/news/n-1615/)