How is the European Bank for Reconstruction and Development able to justify a brand new host country agreement with Egypt, given the abuses still being endured in Egypt and the failure of one billion euros of EU money to improve the economic and human rights situation there? 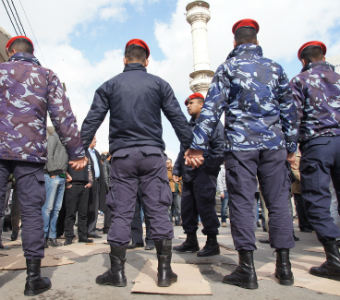 I daresay that the EBRD’s very well-resourced media unit, based at its headquarters in London, operates some kind of ‘grid’ system – the media management tool pioneered by Tony Blair and Alistair Campbell in the 1990s to attempt to control political perceptions and events. If such an EBRD ‘grid’ exists, it’s safe to say that it got more than a bit derailed last week as the bank was attempting to hype its signing of a new host country agreement with Egypt – exactly as a new European Court of Auditors (CoA) report was slamming EU aid to Egypt, based on the appalling human rights situation in the country, and the failure of one billion euros of EU money to tackle the ongoing situation, or do much else besides.

With a Blair era top civil servant, Sir Suma Chakrabarti, now president of the EBRD, will the bank – with its grid punctured, and its credibility regarding its expansion into Egypt and other north African countries steadily waning – now revise its thinking? Or, as we witnessed frequently during the Blair era, will the bank stagger on into the region, convinced of its own righteousness despite the facts from the ground staring it in the face?

The EBRD is not an EU aid body, but it is more than 60 percent owned and overseen by EU member states. Part of its founding mandate stipulates that it must only work in countries that are committed to democratic principles, of which freedom and respect for human rights are essential elements. The CoA’s findings on EU aid to Egypt this week, conjoined with the ‘grid-busting’ EBRD host country agreement announcement, should nonetheless be embarrassing for the bank in many ways – if not deserving of a wholesale rethink of its future actions in north Africa.

First off, of course, the CoA verdict is official acknowledgement of the severe human rights violations that are persisting in Egypt. This is not exactly breaking news for Egypt-watchers, let alone for Egyptians themselves.

Indeed, in recent months the European Parliament has given notice of its awareness that all is not well in Egypt, calling even for a halting of EU funds – the use of the death penalty and unrestricted police violence do not, after all, tally with EU values. Moreover, in recent weeks, 43 NGO workers from rights and democracy groups have been sentenced to jail in Cairo and Egypt has been blacklisted by the International Labour Organisation for restricting the freedom of workers.

How, then, given its democracy/human rights promoting mandate, the palpable abuses still being endured in post ‘Arab Spring’ Egypt and the rising EU level concern about such, is the EBRD able to justify a brand new host country agreement with Egypt?

I can tell you how the EBRD will respond.

Dusting off the debris of its fragmented media grid (“It was just a bad day, a slight blip”), the EBRD will tell anyone prepared to listen that Egypt is on the path to complying with democratic principles.

This has been the bank’s mantra since spring 2011 when the G8 press-ganged it – and other neoliberal-inclined international financial institutions such as the European Investment Bank and the World Bank – into being the ‘good brokers’ for a population sick of Mubarak’s cronyism, disguised (though very much felt) neoliberalism and violent oppression.

Yet, according to the CoA report, there has been little or no progress on human rights in Egypt, with womens’ rights and freedom of expression notably taking a step back since 2011. Other relevant European bodies such as the European Commission have also chipped in, observing quite chillingly that there has been “an increased aversion towards civil society and human rights more broadly”.

The path to democracy in Egypt, alas, appears to be a very long one – and that’s being optimistic. The EBRD, though, will counter that by entering the country it will be able to influence Morsi’s government. A quick survey of oppressive regimes such as Turkmenistan, Tajikistan and Azerbaijan, not to mention Russia and Turkey, with whom the EBRD has engaged for up to 20 years, ought to bring some perspective to the bank’s capabilities in this regard.

For the EBRD to enter Egypt now is simply a violation of its mandate. And there are various other ‘off-grid’ realities worthy of note, too. For one, the EBRD claims in this week’s announcement that it will prioritise energy efficiency projects, though omits to mention that the only energy project it has signed off (just last month) in Egypt is a controversial oil project opposed by NGOs and also linked to an offshore financial centre.

Other EBRD investment instruments that it has up its sleeve for Egypt are equally concerning in light of the CoA report. The bank was very upbeat last autumn when it announced an investment in a north Africa regional equity fund incorporated in the well known tax haven Mauritius. Related investments – disbursed to third party financial institutions and banks to then lend to the SME sector – are part of its package for Egypt and could run to billions of euros in the coming years. This kind of ‘intermediated finance’ has attracted criticism for its opaqueness and lack of accountability – if you were to ask the EBRD where X million to Bank Y ended up, it is under no obligation to tell you.

Yet, as the CoA report stresses, the Egyptian economy remains blighted with endemic corruption and poor transparency – and it is into this arena that the EBRD is boldly going with its own non-transparent investment tool.

Where the CoA report did detect positive progress in addressing human rights issues via EU projects was in the funding of civil society organisations (CSOs). However, as documented by the CoA, funding support for Egyptian CSOs was abandoned following the revolution due to disagreements between the European Commission and the Egyptian administration. In signing its host agreement with Egypt, the EBRD, despite having engaged in various talking shops with Egyptian CSOs over the last year, has ultimately shown very little regard for their concerns.

Ironically, our Egyptian CSO partners were supposed to have had a meeting with the EBRD country director in Cairo last Tuesday. The meeting was cancelled at the last minute, no doubt because of the signing of the host agreement on the same day.

Local groups grid-locked out by EBRD events, then, but there is a growing groundswell of opposition from Egyptian civil society to EBRD and other international financial institution interventions in this new wave of ‘development’ money. European shareholders to the EBRD would do well to pay heed to these concerns but also step back and ask a simple question – is the EBRD fit for purpose and able to effect progressive change as it deepens its involvement in Egypt?